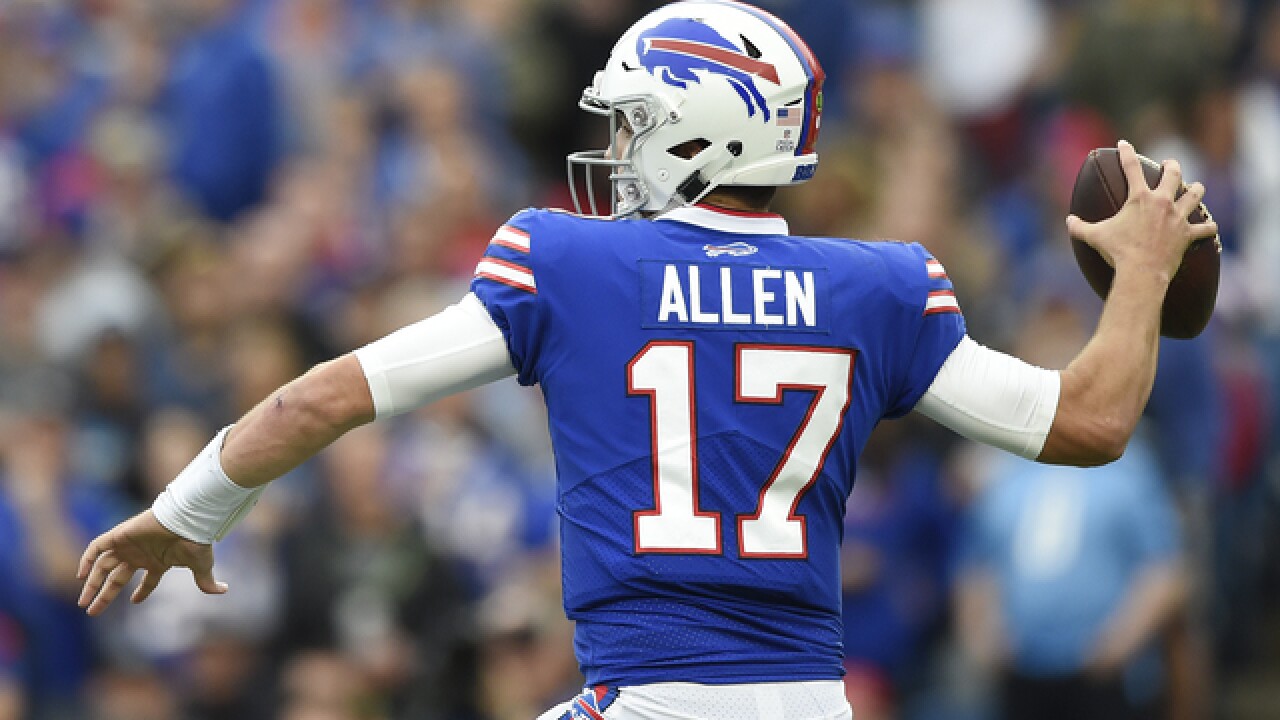 Copyright 2018 Scripps Media, Inc. All rights reserved. This material may not be published, broadcast, rewritten, or redistributed.
Patrick McDermott
<p>BUFFALO, NY - OCTOBER 07: Quarterback Josh Allen #17 of the Buffalo Bills throws a pass in the first quarter against the Tennessee Titans at New Era Field on October 7, 2018 in Buffalo, New York. (Photo by Patrick McDermott/Getty Images)</p>

After four missed games and a bye week thrown in, it seems the Buffalo Bills will finally get their prized rookie quarterback on the field once again. On Monday, Bills head coach Sean McDermott declared that quarterback Josh Allen was in line to start this Sunday against the Jacksonville Jaguars.

Allen, who began throwing and practicing a few weeks ago, will be a full participant during Monday's practice for the first time since suffering a right elbow sprain. He practiced the entire week leading up to the game against the New York Jets but was ultimately made inactive for the game.

Even still, McDermott admitted to 7ABC after the game that Allen was "close" to being able to play against the Jets. Now with over a week of additional rest, Allen is expected to start -- although McDermott did say they would continue to take things "one day at a time" with the rookie quarterback.

The Bills, coming off their bye, will have four practices through the week in preparation for the game against the Jaguars on Sunday at New Era Field.

Joe B's Take
- Although Matt Barkley made it into somewhat of a discussion in the team's most recent game, the Bills now have their rookie quarterback back at the helm -- and it's a welcomed sight for the long-term vision of the team.

When the Bills made Josh Allen the starting quarterback all the way back in Week Two, they assured that the rookie was the starting quarterback of both the present and the future -- regardless of how any of his backups played while he was away with an injury. But it wasn't without some fuel from Barkley and the way the offense looked against a down-and-out opponent.

Except for the Week Ten victory over the New York Jets, the Buffalo Bills offense sputtered to frustrating levels for the fanbase. Without Allen, the offense was mostly unwatchable, and many were clamoring for the rookie quarterback to come back to make the rest of the season a bit more meaningful -- at least until Barkley made his start.

However, one performance should not and will not derail the long-term outlook of the Bills when it comes to the quarterback position. The win-loss record of the 2018 season was never the focal point for a team that chose this year to be the one that they started the rebuild.

In a low-pressure situation, the season has been and will continue to be about the development of Allen both on and off-the-field, and for the Bills to continue to help themselves in how to develop their most important investment best.

As long as he remains healthy, giving Allen the final six games of the season to start will help them understand more about him. It will benefit them in trying to put together an offseason plan with things that they want him to work on both mechanically and with his on-field-processing, as well as to advance in some areas through the final stretch of the season that he would have otherwise not done if he couldn't be on the field.

Furthermore, as they look to attack the offensive side of the ball in the offseason through both free agency and in the 2019 NFL Draft, they can get a bit of a more precise view about what types of players will help him in his development the most. Whether it be a specific type of wide receiver, running back, or offensive lineman that best fits with the rookie quarterback, the Bills should arm themselves with as much information on how to attack the offseason with Allen as their quarterback.

Even if the prospects of starting Barkley might -- with an emphasis on 'might' -- be a little bit more promising for the coming week, that's an enormously shortsighted move considering what the franchise is at the present moment. While Barkley had some good moments and throws against the Jets, he also got away with three throws that easily could have been intercepted, so you'd have to expect a fair bit of regression if he were to start another game.

The Bills are making the right call, and shouldn't hesitate with the decision by any means. This season is and continues to be, all about Josh Allen. Anything to the contrary that gets suggested is merely superfluous because as long as Allen is healthy this week, he's playing -- and the Bills have made that abundantly clear.