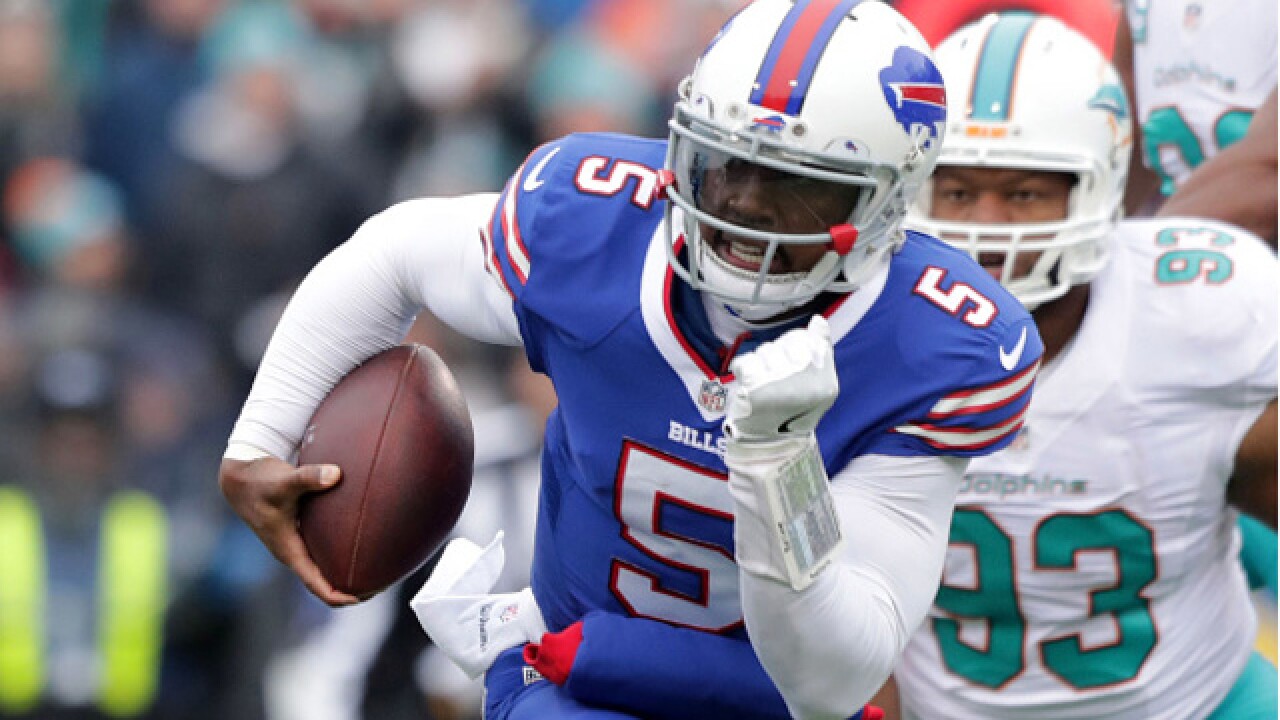 Copyright 2017 Scripps Media, Inc. All rights reserved. This material may not be published, broadcast, rewritten, or redistributed.
Brett Carlsen
<p>ORCHARD PARK, NY - DECEMBER 24: Tyrod Taylor #5 of the Buffalo Bills runs the ball against the Miami Dolphins during the first half at New Era Stadium on December 24, 2016 in Orchard Park, New York. (Photo by Brett Carlsen/Getty Images)</p>

The Buffalo Bills have a brand new duo in charge in general manager Brandon Beane teaming with head coach Sean McDermott, and Beane is the new man on the scene in Orchard Park.

And now that he's at least a little settled into his new gig with the Bills, the longstanding topic of finding a franchise quarterback for the organization has quickly come up. At the moment, the Bills are armed with five quarterbacks on the roster:

The Bills brought back Taylor on a restructured deal, and he's been the presumed starter since he and the Bills came to the agreement. And really, there hasn't been much reason to debate that as the months have passed.

However, what we're seeing -- at least so early into offseason workouts -- is that the Bills aren't planning on pigeonholing themselves in the event things go awry. Speaking with WGR Sports Radio 550 Monday morning, Beane was mostly non-committal at the quarterback position.

While at first declaring Tyrod Taylor the starter, he didn't paint nearly the same clear vision as his answer progressed.

"Well, listen, I'm new here. I met Tyrod the other day. Obviously, I've seen Tyrod on film. If we walk out there today I would say Tyrod's probably the starter. But we haven't even gone through OTAs," Beane said.

The GM went on to bring up all of Peterman, Jones, and Yates -- even saying the rookie Peterman did some "nice things" at rookie minicamp. He then continued on about Tyrod's hold on the job;

"I'm open for competition. Sean is. Earn the right for whatever job you have, for whatever position you're trying to get. I'm not in the business of handing out positions on May the 15th," the GM said.

"We've got a long way to go. It's going to be fun. I'm excited about the challenge, that's what I'm saying. I've got a lot of belief in Tyrod, but we've got other guys that are going to challenge for that as well."

The Bills get back on the field for the start of Organized Team Activities later this week.

Joe B's Take
In GM Brandon Beane's opening comments about Tyrod Taylor and the rest of the quarterback position, it was a calculated and smart answer for a franchise that is going through a transition of power.

Clearly, Tyrod Taylor was not the player that either Beane nor McDermott brought on to the roster. Taylor was betrothed to them, and will likely serve as the best option for the 2017 season.

And that's exactly the point.

There is little incentive to marrying yourself to a quarterback, especially one that hasn't taken a snap in an actual practice run by the current group of coaches at One Bills Drive, unless you believe in that player to be a substantial option for the future.

And even though Beane brought up the competition angle, and wasn't willing to give out a starting spot at this point in time, it doesn't necessarily restrict them from seeing Taylor develop into a franchise quarterback if he fits the mold of what they're looking for.

Smartly, Beane is encouraging competition within the building without discouraging Taylor, who is quite likely to be the starter as it is. Furthermore, Taylor, who has had to work his way up for the majority of his professional football career, couldn't have expected anything different with a new head coach and new general manager running the show in Orchard Park.

So, no, I wouldn't read too much into this, other than that the current Bills brain trust isn't sold that they have the quarterback of the future -- or the franchise QB -- on the roster at the current moment. They need to assess it for themselves, which is the pragmatic approach given the situation they're in.

It's May, and they're keeping their options open. It's really that simple. And at the end of the day, Tyrod Taylor will probably end up being the starter in 2017.

Beyond that? Only time will tell, and it would be foolish to surmise anything to the contrary.