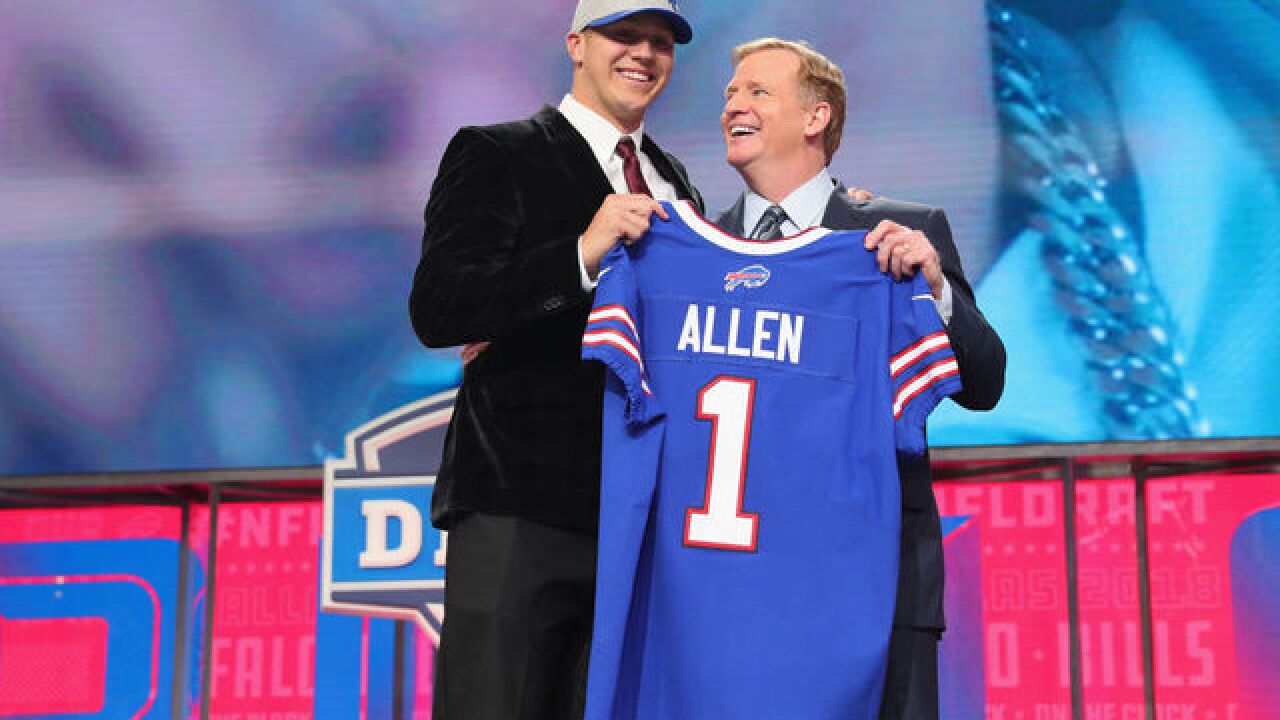 Copyright 2018 Scripps Media, Inc. All rights reserved. This material may not be published, broadcast, rewritten, or redistributed.
Tom Pennington
<p>ARLINGTON, TX - APRIL 26: Josh Allen of Wyoming poses with NFL Commissioner Roger Goodell after being picked #7 overall by the Buffalo Bills during the first round of the 2018 NFL Draft at AT&T Stadium on April 26, 2018 in Arlington, Texas. (Photo by Tom Pennington/Getty Images)</p>

The 2018 NFL Draft is all said and done and at long last, the Buffalo Bills have their franchise quarterback to build around in Josh Allen. While conventional wisdom on Allen is that they’re going to need to sit him and develop him as a player, the question for the 2018 season looms.

Could Josh Allen actually start in the 2018 season?

Outside of Allen, the only other quarterbacks on the roster are A.J. McCarron and Nathan Peterman, and the Bills have been adamant that it’s going to be an open competition to find their new starter. And the team’s top draft pick certainly isn’t excluded from the competition, either.

“We’re not going to rush him,” general manager Brandon Beane said to reporters once the draft had concluded. “But if he somehow wins the job… he wins it.”

Allen, 21, became the earliest pick the franchise has ever made at the quarterback position on Thursday when they selected him seventh overall. And in doing so, it immediately started the clock on how quickly they insert him into the starting lineup.

Several times after he made the selection, Beane mentioned to reporters of Allen’s arm strength and ability to cut through bad weather games. However, when asked why that was such an important facet, considering bad weather games are far less common than one might think — even in a city like Buffalo, Beane called Allen’s experience in the elements an added bonus.

“If we played in a dome, we still would have drafted Josh Allen,” the GM declared.

All throughout the draft process, Beane said new offensive coordinator Brian Daboll was vital — and has an incredibly specific plan for Allen as the team’s quarterback and his development. The GM also said Allen’s experience with pro style offenses in both being under center, and in run-pass option plays, will help with his progress.

- And so it begins. Josh Allen has been with the Bills for all of three days and the speculation as to when he plays is rather interesting, and the fact that Brandon Beane is already wide open to the possibility speaks volumes as to the potential that Allen could actually play this year — and early.

Allen has some things he has to iron out as a passer, most certainly, but the Bills seem to have a detailed plan as to how to best highlight the strengths of their new franchise quarterback, and should he win the job in the summer, I could definitely see him starting by the time Week One rolls around in Baltimore.

My guess is that during training camp and preseason, we’ll see significant strides by Allen and the natural ability that made the Bills want to draft him in the first place, and that very well could help carry him into the starting lineup to begin the year. Even if it doesn’t, I think there’s a strong possibility we see him in the starting lineup in the second half of the season, just because eventually they’ll need to get him some legitimate experience before the more critical second year rolls around.

While McCarron and Peterman will both get a chance, it’s not as though either have a vast amount of starting experience to really stand in Allen’s way, which could make the decision to go with the rookie a little bit easier no matter when it comes down.

However, they have to be very, very careful with this. They cannot start him just to start him if he isn’t fully ready both physically and mentally. In fact, the mental side of it is the most important, because he needs to be able to have the game slow down for him a bit — because that’s a natural thing in the NFL — and he needs to be able to process defenses and see plays develop while on the field. The preseason, in that respect, will be crucial to see where he is in that individual development.

His natural ability to throw the ball can’t be ignored, and neither can Beane’s conviction that he’s the quarterback that they wanted above all else. All summer long, every move he makes will be analyzed in the quarterback competition.

Make no mistake about it, Allen will have to earn it. However, with all the talent he has, if he shows well enough in the summer both mentally and physically, the Josh Allen era could get started way earlier than anyone expected during the pre-draft buildup.