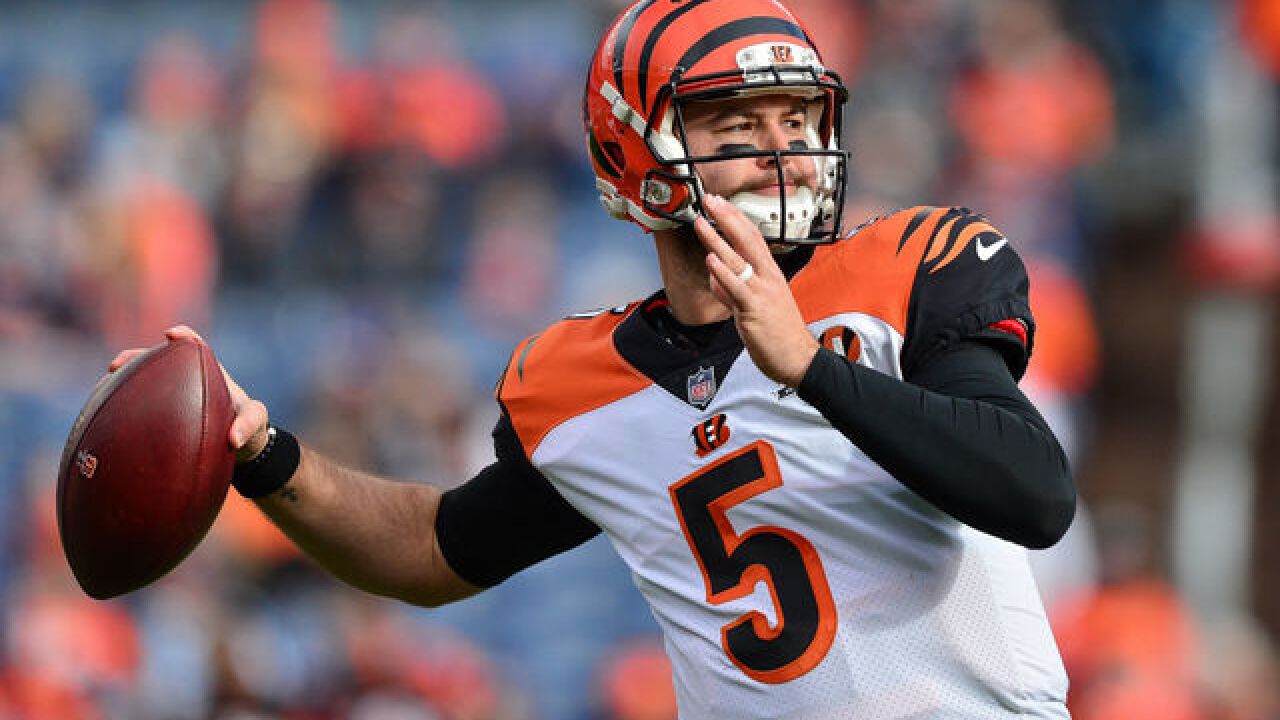 Copyright 2018 Scripps Media, Inc. All rights reserved. This material may not be published, broadcast, rewritten, or redistributed.
Dustin Bradford
<p>DENVER, CO - NOVEMBER 19: Quarterback AJ McCarron #5 of the Cincinnati Bengals throws as he warms up before a game against the Denver Broncos at Sports Authority Field at Mile High on November 19, 2017 in Denver, Colorado. (Photo by Dustin Bradford/Getty Images)</p>

The Buffalo Bills have found the quarterback to pair with Nathan Peterman, ahead of what seems like the inevitable trade up the board in the 2018 NFL Draft for a young franchise passer.

The Bills announced that they have agreed to terms with free agent quarterback A.J. McCarron on a two-year deal. McCarron, 27, has spent all four seasons of his NFL career with the Cincinnati Bengals before becoming an unrestricted free agent on Wednesday.

According to Mike Florio of ProFootballTalk.com, McCarron's contract is a two-year deal worth a total of $10 million. The report also says that the contract also carries "$6.5 million upside based on playing time."

In four years with the Bengals McCarron appeared in only 10 games, with his most notable appearances coming during the 2015 season, when he started three games for Cincinnati. In that season -- appearing in seven total games -- the quarterback completed 66.4-percent of his passes for 854 yards, and had six touchdowns to just two interceptions. He was also sacked 12 times.

After the initial craziness of the quarterback carousel subsided, there were two dance partners remaining. One, the Buffalo Bills who were still in need of a bridge quarterback to help whoever the new young quaterback of the team will be in 2018 by either starting at the beginning of the year, or by being a dependable backup. And two, A.J. McCarron, a player that was likely hoping for a locked in starting job in the NFL, but then saw his market dry up in that capacity.

So, the Bills came calling, and McCarron -- likely sensing that there was at least a chance that he could start some games in Buffalo while keeping the seat warm for the young rookie quarterback, decided to make it a partnership. However, this shouldn't worry you in the slightest if you were hoping for the big swing from GM Brandon Beane and company.

In no way will this prevent the Bills from trading up in the order to secure the quarterback that they covet. Nor do I think that this signing in particular gives any insight into which of the five first round quarterbacks they might be leaning toward.

This is underscored by the money that the Bills signed McCarron to. A two-year, $10 million contract is akin to what a backup quarterback make -- despite it having the earning upside based on playing time. His presence changes nothing.

This, simply put, is an insurance move. McCarron has showed some positive attributes in a very small sample size -- but it's not something that you can necessarily go on as a long-term starter at this point. And, if he does have to take any meaningful snaps in 2018 and does fairly well, he could potentially turn into a trade chip for the Bills next offseason, or as a qualifying compensatory pick contract for the 2021 NFL Draft by letting him walk once his contract is done.

Furthermore, it takes the pressure off of Nathan Peterman as the locked in backup quarterback. Really, it gives the Bills a chance to develop Peterman into a long-term backup quarterback for the team, and really to see if there's something there to work with without thrusting him into the spotlight, or by relying on whichever first round quarterback they decide to go get -- if they get their way.

Even though McCarron is only 27 years old, it will not deter Brandon Beane from the task that he's been building both his roster and arsenal of draft picks towards: to do everything in his power to finally answer the question in finding a franchise quarterback.