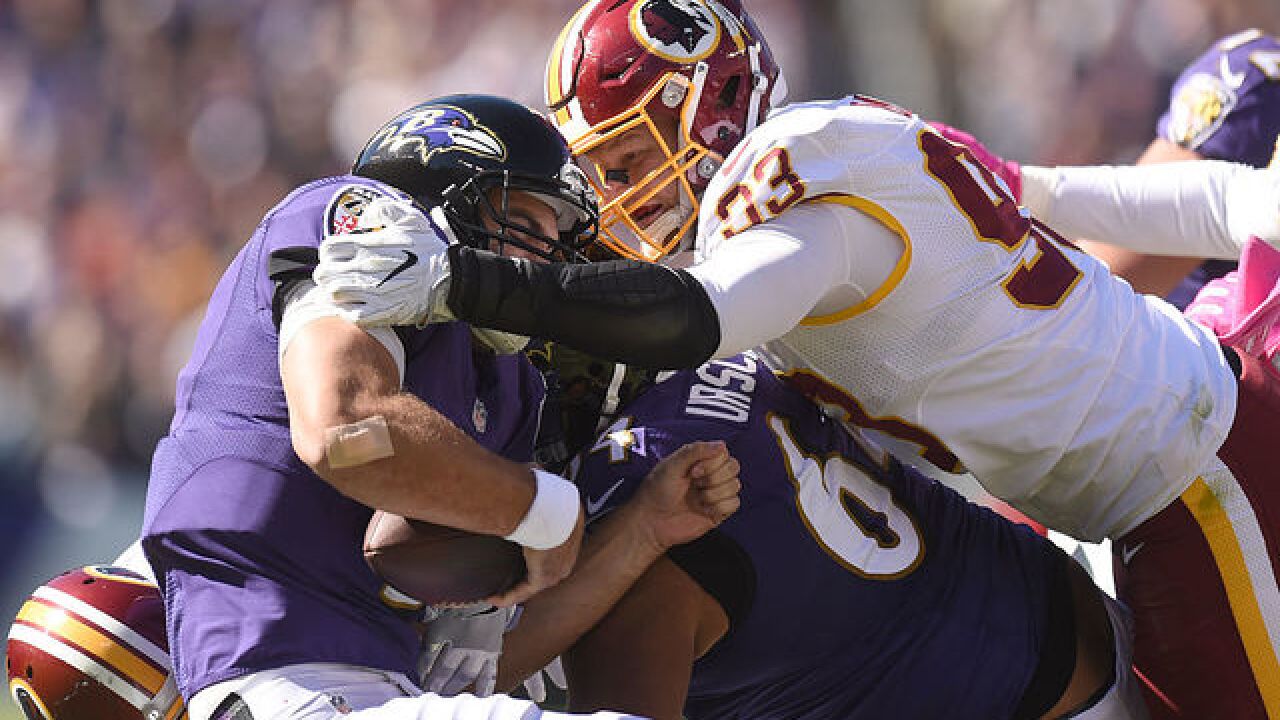 Copyright 2018 Scripps Media, Inc. All rights reserved. This material may not be published, broadcast, rewritten, or redistributed.
Mitchell Layton
<p>BALTIMORE, MD - OCTOBER 09: Trent Murphy #93 of the Washington Redskins sacks Joe Flacco #5 of the Baltimore Ravens in the third quarter during a football game at M&T Bank Stadium on October 9, 2016 in Baltimore, Maryland. (Photo by Mitchell Layton/Getty Images)</p>

The Buffalo Bills have stayed active throughout the last week, and that once again includes adding another big piece to their defensive front seven.

According to a league source, the Bills have agreed to terms on a three-year deal with unrestricted free agent Trent Murphy. The deal, originally reported by NFL.com's Ian Rapoport, could be worth up to a total of $30 million. Though ESPN's Adam Schefter wrote that as of now it's a three-year, $21 million pact.

Despite being listed as an outside linebacker with Washington over his first four seasons, Murphy -- a pass rusher by trade -- will be used as a defensive end in head coach Sean McDermott's defensive system. The former second-round pick likely figures to slot in as a starting defensive end for the Bills.

Ahead of the 2017 season, Murphy was suspended by the NFL for four games for violating the NFL’s policy on performance-enhancement drugs. During the 2017 preseason, Murphy then suffered a torn ACL and could not participate in regular season for Washington.

However, the suspension for Murphy does not linger due to the injury, and he will be available to the Bills immediately for the 2018 season.

Murphy, 27, began to live up to his potential during the 2016 season when the pass rusher had nine sacks as a member of Washington's front-seven.

- The re-tooling of the Bills' front seven is well underway, as now two of their three signings have been devoted to that grouping -- and more specifically, to the defensive line. Outside of Jerry Hughes and Kyle Williams, the play of the defensive line was lackluster, which made it a major point of emphasis for the offseason.

With Murphy, the Bills likely get an immediate starter that's a perfect fit for McDermott's 4-3 defense. Many of his snaps with Washington came against the opponent's right tackles, which means that would be a logical destination for where to put him into the starting lineup.

Some have wondered if this signing means the Bills would do away with Jerry Hughes, but a league source told me that this signing has no bearing on Hughes' status with the team. He remains the starter at right defensive end going up against the opponent's left tackles.

In 2017, Hughes was my top graded player after watching and breaking down each and every game of the coaches film. He will definitely benefit by having two much better starters along the defensive line with him that will actually draw some attention off of him, and set the table for him to regain his form from the past if he performs up to his abilities.

Murphy is still an ascending player that could benefit from the switch in scheme, and his potential impact likely played into the money the Bills signed him for. When you look at Murphy, he's an imposing force -- and really, just an enormous human being.

He's just under 6-foot-6 inches tall, weighs 259-pounds, has nearly 34-inch long arms, and he could probably deflate a basketball with his over 11-inch hands. He is a physical freak that also has a speed element to his game, in which friend of Twitter YardsPerPass pointed out after the word got out about Murphy:

Blows by the OT from the wide 9 pic.twitter.com/GQ0sOvlZDq

The Bills will hope that Murphy can help them provide more pressure on the quarterback in 2018 because that was a huge weakness of the team last season.

So, if not Hughes, who does that hurt?

Potentially, the most to lose here is former first-round pick Shaq Lawson, who was not selected by the current head coach in the draft -- he was a pick of Rex Ryan and Doug Whaley. At best, it shifts Lawson into more of a rotational role for the Bills, as the Bills and McDermott like to use lots of defensive ends and defensive tackles throughout the game to keep them all fresh for maximum output.

As a former first-round pick, however, Lawson still likely carries some value around the league. With how inclined to trade GM Brandon Beane has been in Buffalo -- specifically of players that he and McDermott did not have a hand bringing in -- I wouldn't rule anything out with the former first-round pick at this point in time. We should not forget that Lawson was benched at the beginning of a game for an undisclosed reason by the team.

If Lawson sticks, he likely continues along as the immediate backup to Murphy.

While the Bills still need a pair of linebackers and a younger three-technique defensive tackle, adding Murphy and defensive tackle Star Lotulelei has been a solid start to try and solve a major problem area from the 2017 season.