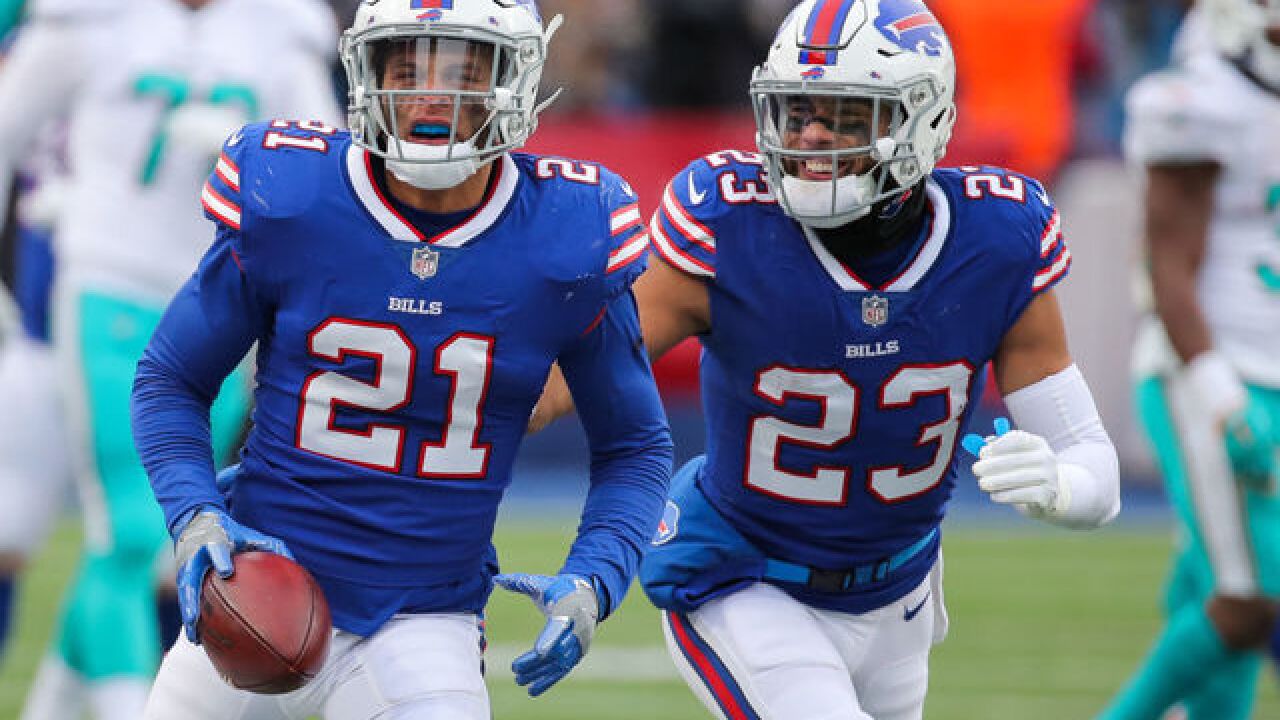 In the build-up to the start of training camp, WKBW will be taking a position-by-position look at the most pressing matters heading into the season. Next, we’ll take a look at the team's safeties:

Biggest Question heading into training camp
Can the Bills get the same production from Hyde and Poyer in 2018?
- Over the course of twelve months, the safety position on the Bills roster went from a significant weak spot into the most reliable starting position on the entire roster. Micah Hyde and Jordan Poyer not only came in as two under-the-radar free agent signings that performed well above expectations, but they also gelled together as a cohesive pair better than some safety tandems throughout the league that have been together for a more extended period. The key to such a successful campaign was utilizing their instincts, and that helped pave the way for multiple interceptions throughout the season. And if it weren't for all the turnovers they forced in 2017, the playoffs may not have been a reality for the Bills. However, any time that turnovers are a huge part of the equation, that is a slight cause for concern for continued success the next year. There is a degree of randomness to turnovers -- especially with how a tipped pass here, or one false step there can be the difference in a turnover or just an innocent incompletion. Hyde and Poyer may be poised to continue their success from last season because, in Sean McDermott's defensive system, they are encouraged to play their educated guesses and be in a spot where all their film work tells their mind to go. There is a case to be made that the production will drop off at least a little bit, but these are two excellent starters that seemed to come into their own in 2017.

Key Backup
Rafael Bush
- The Bills were fortunate enough throughout 2017 to not suffer a significant injury to either of their starting safeties. If it did happen, it could have gotten quite ugly based on the lack of depth existing on the rest of their roster at safety. So, in the offseason, the Bills made it a priority to bring in a bona fide third player to be the primary backup to both. Enter Rafael Bush, a player with enough defensive experience and special teams ability over a long career, to warrant a likely locked in spot on the roster in the event of the disaster of one of Poyer or Hyde suffering an injury that keeps them out for a long time.

Potential Rookie Impact
Siran Neal
- Neal, the Bills' fifth-round selection in late April, gets these honors mainly because he's the only rookie safety on the roster. Even still, the Bills will surely love the small school player for his versatility. Having played all of safety, cornerback, and linebacker in his time at Jacksonville State, the development for Neal to be a multi-faceted tool for the defense will be something the Bills have to work at all summer and into the regular season. He didn't show as much progress as some of the other rookies during all the spring workouts, and that likely tempers some expectations that he can make some impact as early as this season. However, GM Brandon Beane said after the draft that they would like to roster all of the draft picks they made, which likely means Neal will at worst be the fifth safety that's inactive on gamedays. He's one of the intriguing players to track as camp goes on because if the light goes on for him, they could start to work him into some more defensive packages through the summer. It's all on him and how much he can handle because the opportunity for a small role is there.

Sleeper
Dean Marlowe
- If Neal is unable to capitalize on his role with the team in his rookie year, it increases the likelihood that the Bills keep five safeties. If that is what happens, Dean Marlowe is the player I'll be keeping my eye on to steal a spot on the 53-man roster. If successful, he could potentially fill that role of 'big nickel' that Neal has a chance to uphold for specific defensive packages. The thing that stands out about Marlowe is his size and strength. Listed at only 6-foot-1 and 208-pounds, but his length and body composition help give him an advantage over the competition. He had a good spring of practices that saw him move up the depth chart and to receive some reps with the second-team defense by the end of it all. Marlowe's roster life will likely depend on the development of Neal. If Neal looks the part, that makes keeping an extra player like Marlowe slightly unnecessary -- unless he plays so well that the Bills can't ignore him. Keep your eyes out for number-31.

Firmly on the Bubble
Siran Neal, Dean Marlowe, Kelcie McCray, LJ McCray
- Neal and Marlowe are the headliners here, even though Neal should probably be safe because he's a draft pick. Of the two McCray safeties, Kelcie received some second-team reps, so at this point, it looks like he might be the one that could make some noise. Although with how defined the safety spot is on the Bills roster, it's unlikely.