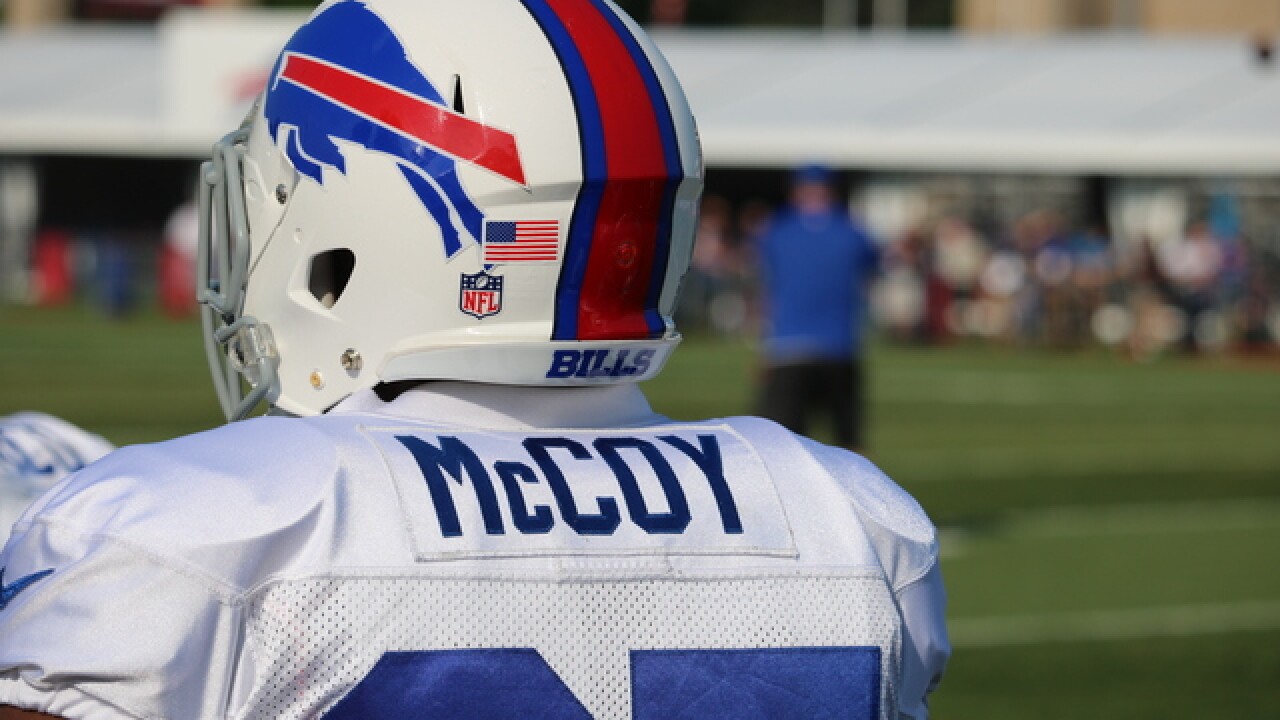 In the build-up to the start of training camp, WKBW will be taking a position-by-position look at the most pressing matters heading into the season. Up next, a position that the Bills will likely depend on through the 2018 season -- the running backs:

Biggest Question heading into training camp
Will LeSean McCoy start to regress?
- Until the situation revolving his ex-girlfriend is resolved both legally and with the NFL, that will continue to be a question. However, from an on-field perspective, LeSean McCoy has entered a realm that has claimed many running backs throughout the test of time. McCoy is officially 30 years old, and data supports the theory that when players at that position reach that age, their yards per carry average starts to take a reasonably substantial dip. McCoy is a bit of a unique case, however, because running backs usually take more significant hits over the course of a career than what the Bills' top runner has. However, because McCoy wins with his speed and his maneuverability, once that starts to be less noticeable, the production they've grown accustomed to with him won't be quite the same. There have been no signs of him slowing down at any point up to this upcoming training camp, which means he could be alright for another season at least. However, the Bills can't ignore the fact that McCoy is 30 years old, and they must execute a plan to keep him a bit more fresh than what they did in 2017 by giving him legitimate rest throughout each regular season game. With how much they depend on him to be a driving force for the offense, they can't play with fire at his age.

Key Backup
Chris Ivory
- In the offseason, knowing that their depth chart behind LeSean McCoy last season was less than exemplary, the Bills went out and signed Chris Ivory to a free agent contract that surprised many for how much they wound up paying him. Ivory will be making a little over $3 million in 2018 to be the primary backup to McCoy, while carrying a cap hit of nearly $2.5 million. Based on Ivory's running style, his power-based style will serve as a legitimate difference from how McCoy operates with the ball in his hands and will give a different look to opposing defenses. The Bills tried to do the same thing with Mike Tolbert in 2017, except Tolbert didn't have much juice left in the legs and drew the ire of many Bills fans throughout the season. On paper, Ivory is an upgrade over Tolbert. However, Ivory is also 30 years old, and his last season in Jacksonville had him averaging only 3.4 yards per carry -- a far cry from his 4.3 yards per carry average even back in 2015.  Should Ivory disappoint them this season, they can quickly get out from the contract ahead of next season with a savings of $2.25 million on the 2019 salary cap. For this season, however, Ivory is safe and will be a definite part of the plan to start the year.

Biggest battle
Travaris Cadet vs. Taiwan Jones
- The Bills don't have a lot of depth when it comes to the running back situation, which means there isn't a huge push to keep a significant amount of players on the roster once they have to make final cuts. They also don't have a rookie that stands out as someone that could crack the 53-man roster at the moment, which makes it pretty cut and dry. To me, I think Travaris Cadet and Taiwan Jones are probably battling it out for the same spot. They have similar skill-sets on offense, similarly aged, and they're both auditioning to be the primary kick returner for the Bills this season. Of the two, Cadet looked like the more efficient running back in 2017. While it is possible that the Bills could keep both, their similarities give me pause and that the team might be stronger by keeping another player at a different position.

Sleeper
Marcus Murphy
- Last year's late-season addition, Marcus Murphy stuck around for the 2018 campaign and will be trying to recreate the magic that he found down in Miami in the final week of the season. It was a mild surprise that in the team's playoff game, Murphy was not incorporated in any part of the game plan whatsoever -- even with LeSean McCoy dealing with an injury heading into the game. Still, Murphy put together a solid spring and took some reps with all three offensive units. However, he's going to need to stand out as a runner because he does not offer much on special teams, which is why he's behind both Travaris Cadet and Taiwan Jones at the moment. If the Bills only keep one of Cadet and Jones, Murphy could earn a spot as the fourth running back should he proves that he's deserving throughout the preseason.

Firmly on the Bubble
Travaris Cadet, Taiwan Jones, Marcus Murphy, Keith Ford
- Cadet, Jones, and Murphy will all be in consideration for a roster spot, while it's most likely that undrafted rookie Keith Ford will be fighting to show that he belongs on the practice squad. I will not be surprised in the slightest bit if the Bills look to add a running back at some point ahead of the start of the regular season, once players from other teams get released.