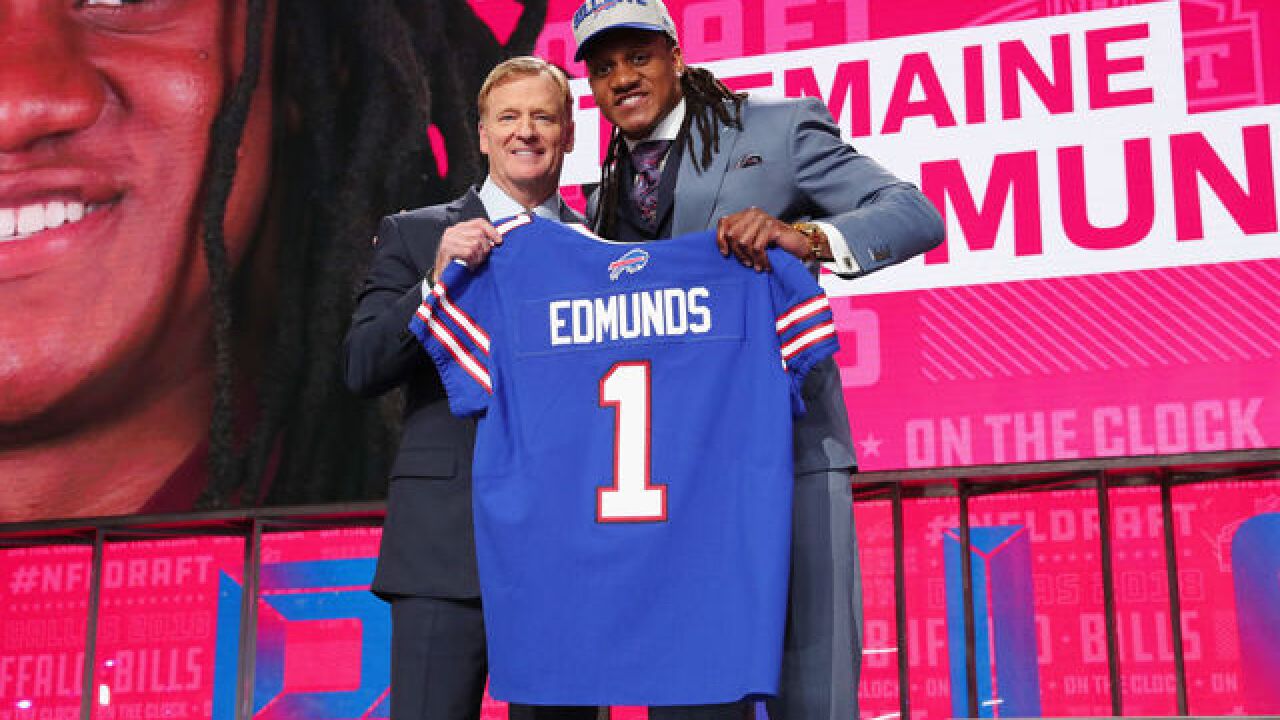 Copyright 2018 Scripps Media, Inc. All rights reserved. This material may not be published, broadcast, rewritten, or redistributed.
Tom Pennington
<p>ARLINGTON, TX - APRIL 26: Tremaine Edmunds of Virginia Tech poses with NFL Commissioner Roger Goodell after being picked #16 overall by the Buffalo Bills during the first round of the 2018 NFL Draft at AT&T Stadium on April 26, 2018 in Arlington, Texas. (Photo by Tom Pennington/Getty Images)</p>

In the build-up to the start of training camp, WKBW will be taking a position-by-position look at the most pressing matters heading into the season. First up, the linebackers:

Biggest Question heading into training camp
Can Tremaine Edmunds handle the full starting load as a rookie?
- This question can actually apply to both of the Bills’ top two linebackers, but especially for Edmunds based on his lack of experience, and because he’s only just turned 20 years old. Edmunds is being thrust into a key role right from the get-go as the team’s starting middle linebacker and without a real competitor for that starting role. On paper, he has everything the Bills could want out of their middle linebacker. He’s got incredible size, strength, speed, and movement ability for the position. However, to think that he’s going just to be a top-tier starter immediately might be asking for a bit too much. He’s mature for his age, but at only 20 years old it’s natural to wonder how he’ll adapt to the full rigors of a 16-game NFL season. Matt Milano deserves some consideration with this, too, as he only started five games in 2017. He has to prove that he can become a dependable, every week starter after just getting a handful of games. If those two players hit, they have the linebacker position locked up for a long time to come. If they struggle with that more significant workload and responsibility, perhaps they aren’t as developed as the team would have hoped for this season.

Potential Rookie Impact
Tremaine Edmunds
- Although there are some concerns about handing over the keys to the middle linebacker spot to a rookie, there is no doubting his potential through all of it. The Bills are depending on him in that vital role, and for that reason, there is no one else that could be the potential rookie impact. Edmunds will be on the field for nearly 100-percent of snaps, which based on the production and stats that will come along with it, will put him right in the mix to be a candidate for the defensive rookie of the year. To become the defense that the Bills think they can, Edmunds will need to play a critical role through it all.

Key Backup
Ramon Humber
- In 2017, the Bills went into the season with Ramon Humber as their starting weakside linebacker. Although he played at an average level, it was clear after an injury that the then-rookie Matt Milano was playing at a higher level, and needed to be in the starting lineup before too long. Later that season, Milano took over, and Humber shifted back into a reserve and special teams role. The Bills liked what he did so much that they offered him a contract to bring him back in that same reserve role as he ended the year. The Bills know just what they’re getting in Humber, and his key backup role was confirmed during spring practices when Milano sat out with a hamstring injury. In his place, Humber lined up next to Tremaine Edmunds for every defensive snap. Should there be an injury, he’s likely the first man in.

Sleeper
Julian Stanford
- The Bills linked up with Stanford near the start of the free agent market opening up. Don’t let the depth chart fool you about Stanford. He’s got a strong chance to make the roster — despite being third technically. Where he stands out is on special teams, and that has the opportunity to not only pave the way to a roster spot but to be active on game day every single week. His presence puts a couple of other players in jeopardy. If Stanford starts getting some work at outside linebacker as well, then that even speaks to his versatility even more.

Firmly on the Bubble
Julian Stanford, Tanner Vallejo, Deon Lacey, Xavier Woodson-Luster, Corey Thompson
- The leading name here is Tanner Vallejo, last year’s draft pick that was unable to get on the field due to both the depth chart and injury. Now with Stanford on the roster and given a relatively substantial financial commitment, Vallejo’s spot on the roster surely isn’t guaranteed. He should probably be safe, but the one player that is vulnerable is Deon Lacey. He was brought in last year to serve in a key special teams role, which is one Stanford was primarily brought in to fill. Corey Thompson is an interesting name to track as well, but his path to a roster spot isn’t clear. He might find a home on the team’s practice squad.