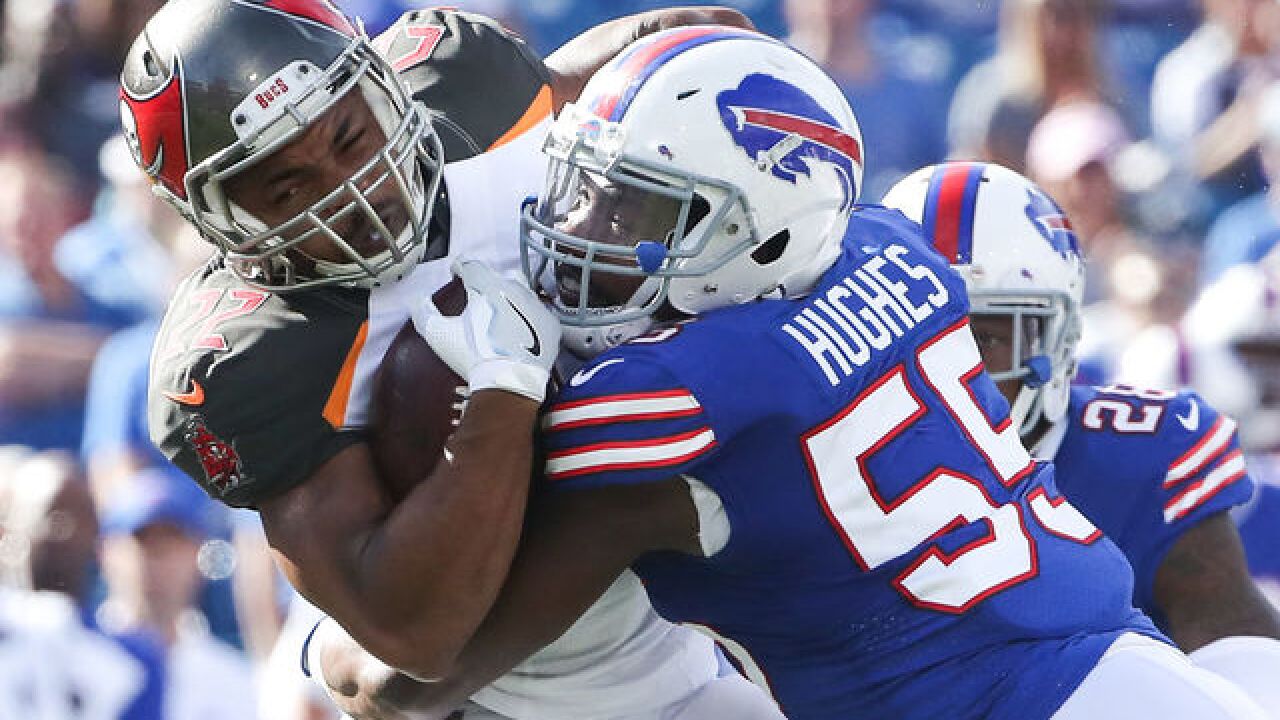 In the build-up to the start of training camp, WKBW will be taking a position-by-position look at the most pressing matters heading into the season. Up next, a position that the Bills hope for much more production from in 2018 -- defensive end:

Biggest Question heading into training camp
Can the Bills re-establish their pass rush?
- A reminder as to how volatile the NFL is, the Buffalo Bills used to have one of the top pass-rushing units in the entire NFL not even five years ago. However, new coaching staffs and a whole bunch of roster turnover has brought the Bills down to having one of the worst sack totals in the entire league in 2017. Many will put that at the feet of Jerry Hughes, the team's top pass rusher on the roster, but the real story is that he didn't have much help throughout the year. The defensive tackles had a rough year and the Shaq Lawson, Eddie Yarbrough combination didn't provide much fire off the edge from the opposite side of the line. That allowed teams to focus on Hughes in no small degree, and even with all the attention, he still had a good season -- and much better than the sack statistic would indicate. To combat that, the Bills paid a pretty penny for Trent Murphy -- a pass rusher that's coming off an injury, but that also provides the massive potential to fit well into Sean McDermott's defensive scheme at left end. Those two will be the point men in trying to get to the quarterback more effectively while the Bills still deploy a heavy rotation that will keep their starters somewhere between 25-to-40-percent of the snaps. For the Bills to move up the ranks defensively like they hope to, they have to get more pressure on the opposing quarterback.

Key Backup
Eddie Yarbrough
- My favorite fun fact about Eddie Yarbrough was that he was so unknown to start workouts in 2017, that they listed him under the linebackers for the entire spring -- rather than his actual position of defensive end. In their defense, the Bills probably weren't expecting much from Yarbrough -- an addition to the roster in early April likely more as a roster filler. However, once they got to training camp, Yarbrough continued to impress and improve, moved up the depth chart, and by the end of it all earned a spot on the 53-man roster. It was a true underdog story. Now the Bills trust Yarbrough so much that they've moved him to the more high profile spot of the right defensive end -- Jerry Hughes' direct backup. Still only 25 years old, the Bills are likely quite intrigued by how Yarbrough handles his new responsibilities and if he can provide an additional spark as a pass rusher in addition to his sound edge defending versus the run.

Trade bait?
Shaq Lawson
- The importance of the upcoming summer cannot be understated for former first-round selection Shaq Lawson. After two disappointing seasons, Lawson now seems to be at a make or break point. The Bills already replaced him in the starting lineup full-time with Trent Murphy, and it appears that Eddie Yarbrough has become their more favored backup by placing Yarbrough at right end for this season -- the position that Lawson had been so productive at throughout all his college years. Instead, he'll be the primary backup to Murphy if all goes well. If Lawson shows up and has the same motivation that he showed during the spring and does well during the physical portions of practice and games, the Bills will gladly have him back. If he starts to blend in with some of the other reserve players, GM Brandon Beane could look to move on from him via trade this summer.

Sleeper
Terrence Fede
- Owa Odighizuwa is indeed one to keep an eye on, but the reason I'm putting Terrence Fede as the sleeper is mainly due to his positional flexibility. Like how the team used Ryan Davis last year, Fede can work both outside at his normal postion of defensive end, and then can flip inside to defensive tackle on pass rushing downs. That's something that the Bills had Shaq Lawson do in spots during the spring. If Lawson ends up being traded by the Bills at some point ahead of the season, Fede's flexibility makes him an intriguing option to keep on board. Even if they don't trade Lawson or want to hold Odighizuwa, they could still keep him on as a fifth defensive end with how much Sean McDermott believes in a rotation.

Firmly on the Bubble
Owa Odighizuwa, Terrence Fede, Mike Love, Mat Boesen
- I think both Odighizuwa and Fede have a chance to crack the 53-man roster. Mike Love and Mat Boesen are likely going to have trouble doing the same with so many experienced players ahead of them on the depth chart. There will likely be room for one on the practice squad.