Bills to bring in CB Apple on pre-draft visit 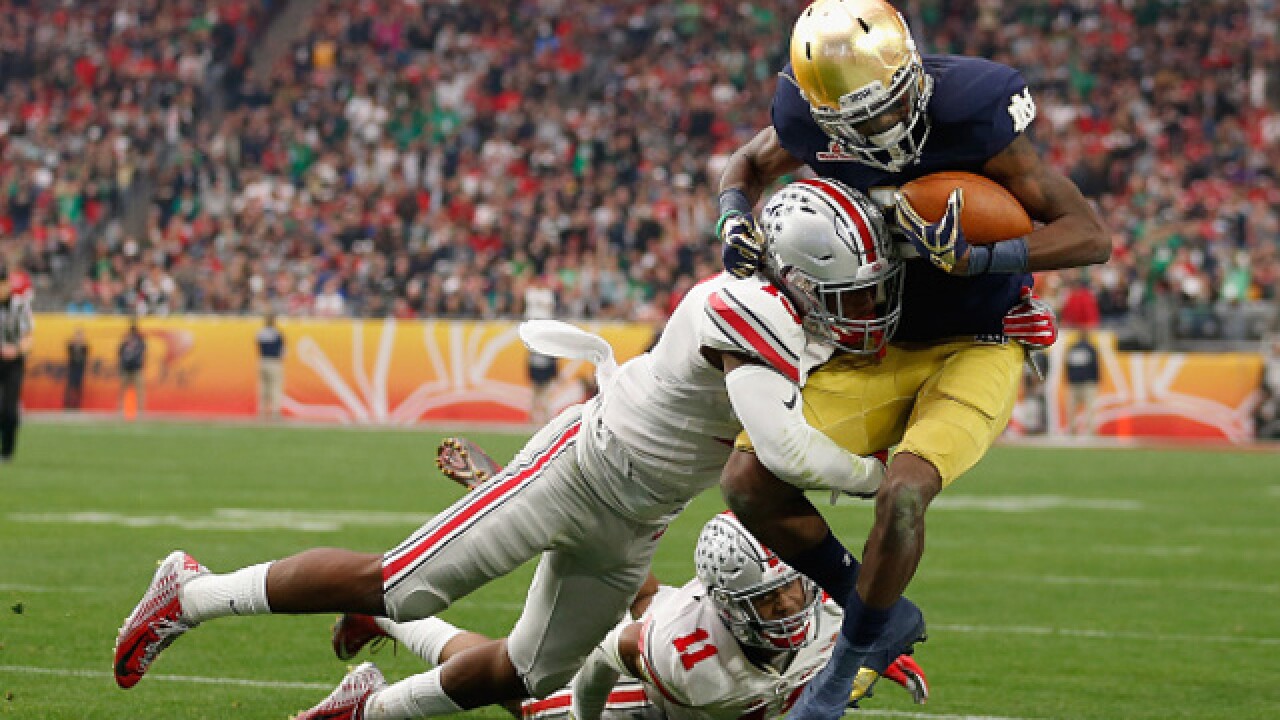 Christian Petersen
<p>GLENDALE, AZ - JANUARY 01: Wide receiver Chris Brown #2 of the Notre Dame Fighting Irish runs with the football against safety Vonn Bell #11 of the Ohio State Buckeyes (back) and cornerback Eli Apple #13 (front) during the third quarter of the BattleFrog Fiesta Bowl at University of Phoenix Stadium on January 1, 2016 in Glendale, Arizona. The Buckeyes defeated the Fighting Irish 44-28. (Photo by Christian Petersen/Getty Images)</p>

The Buffalo Bills have a grand total of 30 pre-draft visits to conduct between now and the 2016 NFL Draft on April 28, and of those that have been reported, the large majority of players have been all about defense. The latest prospect visit to be unveiled also plays on the defensive side of the ball, but, at a position that perhaps you wouldn't expect.

In an interview with NFL Sirius XM, Ohio State cornerback Eli Apple said that he will make a pre-draft visit to Orchard Park with the Bills. That's right.... a cornerback, and not one that is projected to be selected in the middle rounds.

Apple is thought to be one of the top five cornerbacks in the draft this year, and is expected to be drafted in the first two rounds. In his time at Ohio State, Apple had 86 tackles, 18 pass broken up, and four interceptions over the span of two years.

He declared for the draft as an underclassman following his redshirt sophomore season. For a full list of the pre-draft visits, click the link to the left.

The Bills have two starting cornerbacks already in Stephon Gilmore and Ronald Darby, and they just used their top draft choice on a cornerback on Darby in 2015. So, you might be wondering, why would the Bills be interested in a cornerback that's projected to be selected in the first two rounds?

Well, for a few different reasons.

First, sometimes pre-draft visits are used by teams to throw off the scent of what they actually intend to do during the selection process. Any team that really likes Apple may see the Bills sniffing around, and it could raise the value in their mind, which allows another prospect to fall down at least one spot. I'm not saying that's the case here, but, it's at least an aspect to think about.

Second, Stephon Gilmore is heading into the final year of his contract, and if you're the Bills, there has to be a little concern about getting him under contract for the long-term. Janoris Jenkins got paid a boatload of money this offseason by the New York Giants, and Carolina corner Josh Norman seems to be intent on landing a huge, market-breaking deal. If you're Gilmore, why sign before Norman gets paid. The Bills have to make it worth his while, but, they'll continue to work to get him signed to a long-term deal. If they can't, then it would be time to start thinking about other options.

And third, Doug Whaley has been quite clear that he'll draft the 'best player available,' regardless of position. And, with how the roster and contract expirations are structured for the Bills, a case for a corner could be made.

However, with the importance placed upon this season, the Bills must add an impact player on the defensive side of the ball -- and a cornerback in the first round isn't that.