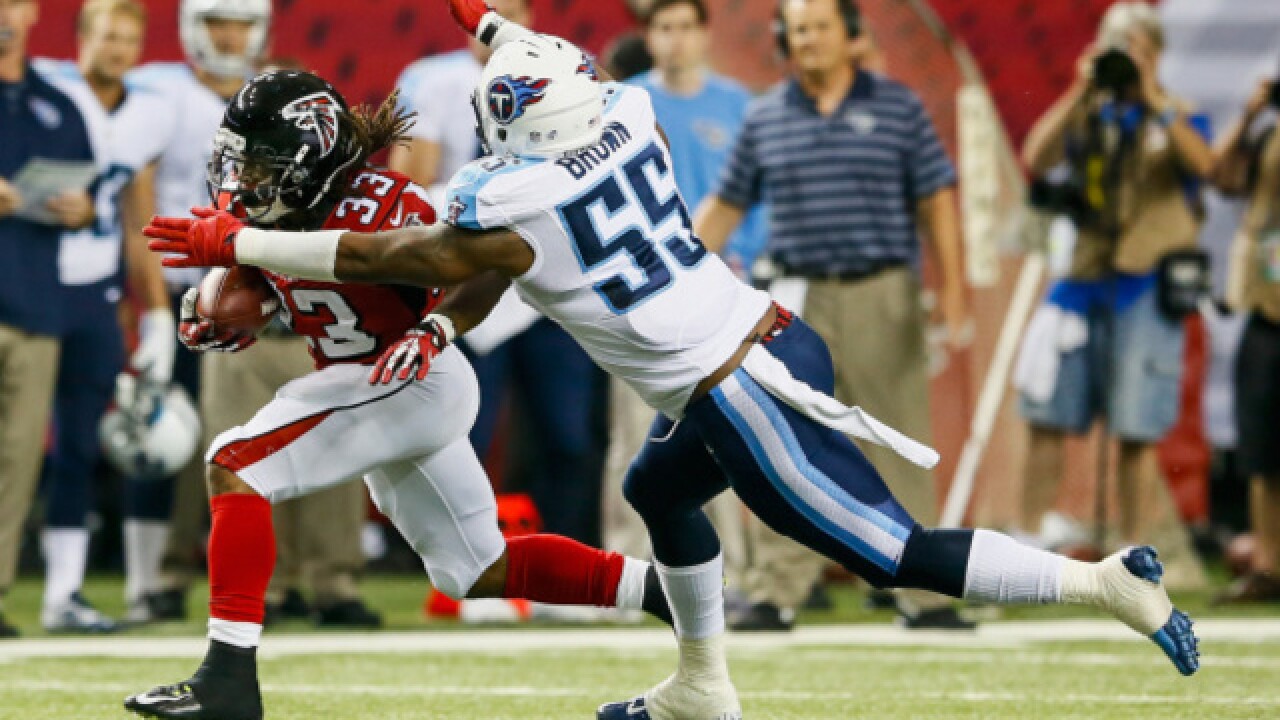 Kevin C. Cox
<p>ATLANTA, GA - AUGUST 23: Devonta Freeman #33 of the Atlanta Falcons runs the ball past Zach Brown #55 of the Tennessee Titans in the first half of a preseason at the Georgia Dome on August 23, 2014 in Atlanta, Georgia. (Photo by Kevin C. Cox/Getty Images)</p>

The Buffalo Bills have gotten another free agent to sign on the dotted line.

7 ABC has learned that linebacker Zach Brown, who visited with the Bills on Monday afternoon, signed a one-year deal with the team following his visit. Brown was the second linebacker to visit in as many weeks, after Bruce Carter came to Orchard Park late last week.

Rand Getlin of NFL.com was the first to report the signing. The Bills officially announced the move later on Monday afternoon.

Brown, 26, spent all four of his NFL seasons as a member of the Tennessee Titans, having started for them in the first two years of his career. In 2014, Brown suffered a pectoral injury that ended his season after just the first game. Last season, Brown lost his job after the first four weeks of the season and shifted into a reserve role.

Through his career, Brown has accrued 261 tackles, 10 sacks, and six interceptions, and has started a total of 33 games.

Cornerback Corey White, 25, has spent time with the New Orleans Saints, Dallas Cowboys, and most recently, the Arizona Cardinals. He was with the Saints for the first three years of his career, having started 19 games for them. He started 2015 with the Cowboys, was released, and then picked up the Cardinals. White has a total of four interceptions.

Over a week since the deal was originally reported, the Bills officially announced the signing of wide receiver Leonard Hankerson. The 27-year-old spent time with both the Atlanta Falcons and New England Patriots, before being claimed by the Buffalo Bills at the end of the 2015 season.

He had 26 receptions for 327 yards and three touchdowns in eight games for Atlanta. It was a reported one-year deal for him as well.

The most intriguing signing of the free agent visitors is Zach Brown, mostly because he could push to start. Brown has always been known as an incredibly athletic linebacker, and would slot in -- at the very least -- as competition to be the weakside inside linebacker next to Preston Brown.

Brown's experience in the 3-4 helps his cause as a depth signing, and he'll also have to try to make the team as an asset on special teams as well. Signing Brown would not stop the Bills from drafting a linebacker, but it might make the need for one early in the 2016 NFL Draft a little bit lesser.

As for White, he'll likely be a depth player at cornerback, and someone that can fill in if one of Stephon Gilmore or Ronald Darby gets injured. He'd be battling with Javier Arenas and Mario Butler to be the main backup outside cornerback, but would likely have to make the team based on his abilities on special teams as well. White played for Rob Ryan when the coach was the defensive coordinator in New Orleans.

Hankerson will battle for time as the third wide receiver, along with Greg Salas, Marquise Goodwin, Jarrett Boykin, and others.