Brett Carlsen
<p>BUFFALO, NY - OCTOBER 16: LeSean McCoy #25 of the Buffalo Bills celebrates a touchdown against the San Francisco 49ers during the first half at New Era Field on October 16, 2016 in Buffalo, New York. (Photo by Brett Carlsen/Getty Images)</p>

Buffalo Bills running back LeSean McCoy hired prominent defense attorney Don Samuel to represent him after McCoy's ex-girlfriend was allegedly attacked in the home they shared in Atlanta. Samuel has previously defended other NFL stars including Ray Lewis and Ben Roethlisberger.

Attorneys representing McCoy's ex-girlfriend, Delicia Cordon, say the pair were in an eviction battle and were arguing over jewelry in the months before she was allegedly assaulted.

Milton, Georgia Police say they responded to a home on Hickory Pass at 3:18 a.m. Monday, where they discovered one victim who had been physically assaulted by a lone intruder.

Police say the residence was "specifically targeted," and that the suspect was demanding specific items from the victim.  Attorneys representing Cordon say the assailant demanded specific items of jewelry that had been previously gifted to Cordon by McCoy.

"Ms. Cordon's wrist was bruised when the assailant could not get the bracelets off her wrist, and he hit Ms. Cordon in the face with a firearm multiple times while demanding specific items of jewelry and cash from her," attorneys from Tanya Mitchell Graham, P.C. wrote in a statement to 7 Eyewitness News.

The statement goes on to say McCoy had changed the home security system the month before the alleged attack.

McCoy has strongly denied the allegations made against him.  The 29-year-old tweeted, "For the record, the totally baseless and offensive claims made against me today on social media are completely false. Further more, I have not had any direct contact with any of the people involved in months."

According to court documents, Cordon was set to be in court Tuesday for an eviction hearing. 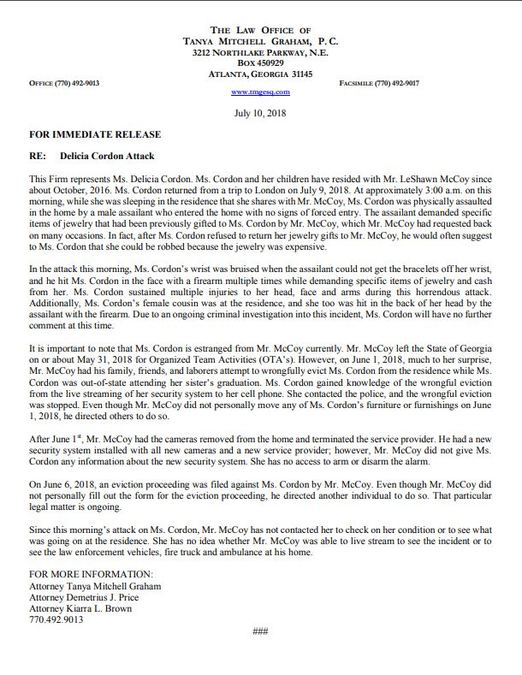 The Buffalo Bills tells 7 Eyewitness News the team has spoken to LeSean McCoy regarding abuse allegations being made against him.

"We have spoken to LeSean and have been in contact with the National Football League.  We will continue to gather information," the Bills said in a statement to WKBW.

Police say the victim in Monday morning's incident was treated and released from North Fulton Regional Hospital.  A second female suffered minor injuries. That second woman, according to the attorneys' statement, was Cordon's cousin.

Images of the alleged victim, which 7 Eyewitness News has chosen not to publish, show a woman's face and arm, bloodied and bruised face. On Tuesday morning, Cordon's friend posted the pictures to Instagram, making claims of abuse, animal abuse, and illegal steroid use.