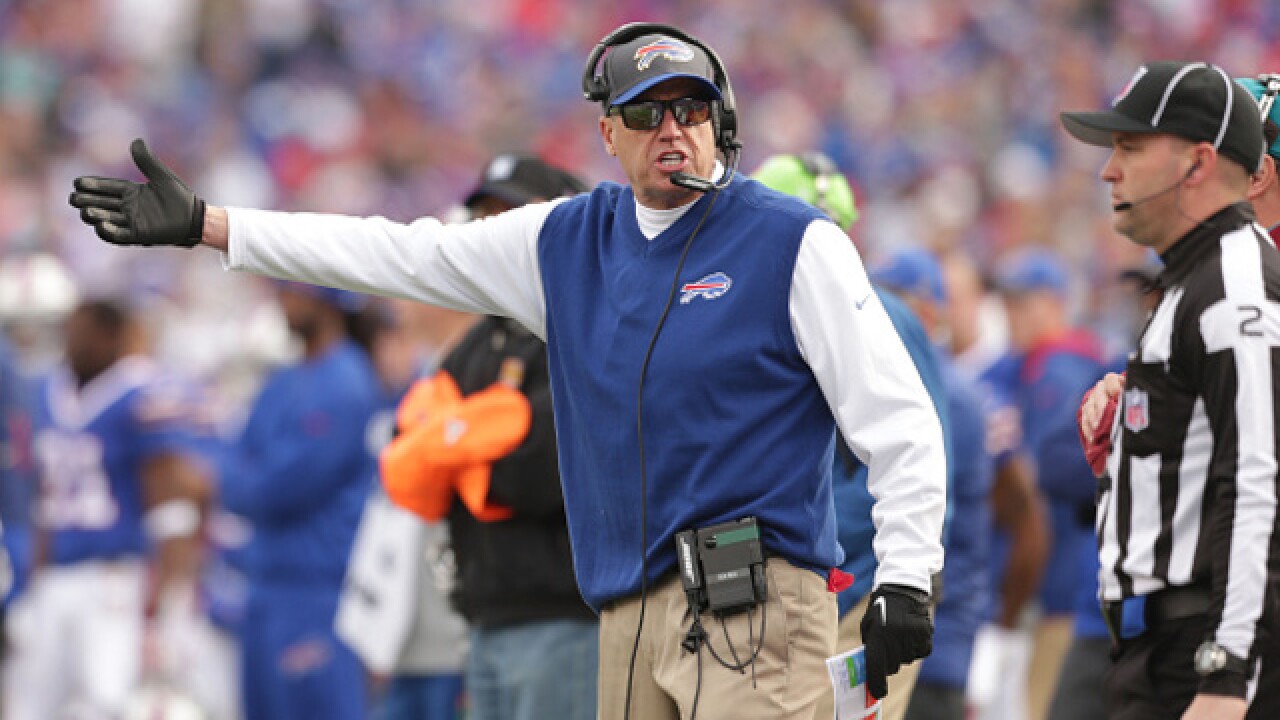 Brett Carlsen
<p>ORCHARD PARK, NY - DECEMBER 06: Head Coach Rex Ryan of the Buffalo Bills argues a flag with an official against the Houston Texans during the first half at Ralph Wilson Stadium on December 6, 2015 in Orchard Park, New York. (Photo by Brett Carlsen/Getty Images)</p>

In the National Football League, the free agency frenzy has subsided, and now teams are focusing on the final part of significant offseason roster building — the 2016 NFL Draft. With only a little over one month to go, Buffalo Bills head coach Rex Ryan addressed reporters for one of the final times before it began.

Even though the conversation at the league owner’s meetings wasn’t highly draft intensive, there was plenty to digest from the man in charge of the Bills.

Some of the highlights, along with my thoughts on what the head coach had to say:

Rex Ryan on Tyrod Taylor's agent's comments yesterday: "The agent's probably most disappointed, but there's a football team to run."

- On Monday Tyrod Taylor’s agent, Adisa Bakari, let it be known that he was disappointed in the lack of negotiation. Bakari told The Buffalo News that he believes the Bills will not address Taylor’s contract, which is due to expire in March of 2017, before the 2016 season begins. General manager Doug Whaley told reporters in Boca Raton that work needed to be done, which normally equates to a gap in what the player wants, and what the team is willing to give.

Rex Ryan’s comments above were a little less diplomatic, but Bakari issued the first challenge with his public commentary on the matter. While Taylor’s agent raises some good points in that the quarterback provided Taylor with better quarterback play than what they were accustomed to in the post-Jim Kelly era. However, the Bills have all the power in the situation. Taylor is signed for the 2016 season, he only has one year of starting experience, puts himself at risk of injury with his playing style, and still has things he needs to progress with.

With all that, and knowing that the Bills easily have the franchise tag in their back pocket if Taylor progresses and long-term negotiations don’t go well. Sure, Taylor can hold out either this year or the next without having a long-term deal, but rest assured that the Bills will take precautions by drafting a quarterback at some point in late April.

While Taylor’s agent is a little biased on the matter and clearly doesn’t agree, the fact is that the Bills are being smart with this situation. They have an entire season to figure out if Taylor is the guy they’ve been waiting for, and if he is, they’ll gladly reward him with a fat new contract.

What does Tyrod need to do better? That’s where another Rex Ryan comment comes in…

2) Tyrod over the middle

Rex Ryan said he wants the Bills to be able to attack the middle of the field in the passing game more.

- While not named in the tweet, going over the middle of the field is an area that Taylor doesn’t do nearly enough. He possess the arm strength to drive the ball outside the numbers on those patterns, but far too often, yards were left on the field because Taylor didn’t take advantage of the area of the field. In a study, Rob Quinn of BuildingTheHerd.com went back and charted the quarterback’s season, and found that he only went over the middle 7.1-percent of the time — and no, that’s not a typo.

It all bleeds into the same thing: Taylor must get more comfortable, and far less robotic while operating in the confines of the pocket. Taking advantage of the middle of the field will open up quite a bit for Taylor, and in turn, help the offense get to an even more efficient level than what it played at in 2015. If he doesn’t, he’ll become more predictable for defenses and regression could occur. It’s an important year for everyone involved, and Taylor’s progress will be the difference in it all.

Rex said Preston Brown has the physical attributes you look for in a MIKE linebacker but he needs to learn how to communicate better.

Rex Ryan says Bills will give LB Preston Brown "a good coach." Asked who, Ryan says we'll find out. "You know who," he says.

- During the 2015 season, the defense regressed at almost every position besides defensive tackle and cornerback. The defensive ends stats were down, the safety play wasn’t nearly as good, and the play of the linebackers fell off significantly from 2014 to 2015. While Nigel Bradham played average football — which was below average compared to what he did in 2014 — Preston Brown struggled mightily down the stretch of the season.

Brown was getting routinely engulfed by blockers and the defense suffered as a result. It even came to a point where Brown made some public critiques of the defensive scheme, which has made the Bills yearn for more from the now third-year linebacker — and they need him. With Bradham having gone to Philadelphia and Ty Powell’s restricted option not being picked up, the Bills are now down to Brown, Kevin Reddick, Tony Steward, and A.J. Tarpley — not exactly an awe-inspiring group.

The inside linebacker play is a big part to the Rex Ryan defense, and Brown will need to play much more like the 2014 version of himself than the one we saw last year, which is why the Bills are publicly critiquing him, and assigning the ‘you know who’ coach to help him progress. That ‘you know who’ coach? It is almost assuredly Rex’s twin brother, Rob, and Rex wouldn’t have it any other way.

Rex Ryan said Jim Schwartz's defensive scheme was easier mentally on the Bills so the transition wasn't as smooth as he hoped.

- Besides a slight little pat on the back, it’s further confirmation that the Bills, come hell or high water, will feature Rex Ryan’s complex defensive scheme in 2016 — the same one that multiple players on the team publicly criticized during the 2015 season. Although saying it in a rather odd way at the NFL Combine, Rex Ryan wasn’t kidding with his “fully pregnant” comment regarding going all in on his defense in the upcoming season.

The trick will be finding the players that take to the defense the same way that brought him success in both Baltimore and with the New York Jets. That’s a bit of a harder task this offseason with both starters and depth needed, and not a lot of resources to do so. It will be a challenge, but one the Bills head coach is clearly hellbent on doing his way.

Rex Ryan said he thinks Mario Williams will get "everything he wants" in Miami. On the rematch: "We may have that circled, too."

- Mario Williams was the most notable player that criticized Rex Ryan’s defensive scheme, doing so on four separate occasions in the run leading up to his release from the roster. When the Bills head coach referred to “everything he wants,” he was speaking about Mario having no coverage responsibilities, and operating exclusively as a defensive end that is paid to get after the quarterback.

It was clear that the two sides just weren’t destined to operate under the same roof. Williams could have been a really good five-technique in Rex Ryan’s system, but that’s not what he wanted to do — and it certainly wasn’t what he was paid to do. The fault for the failed marriage likely lies somewhere in the middle, but both sides will have a little extra motivation the two times they square off in 2016.

Rex Ryan said he hears Hard Knocks would go to #Saints or #Rams "and that's fine by me."

- Rex Ryan has been asked several times since the season ended about the possibility of being on Hard Knocks, and every single time, he was replied with a certain displeasure for the prospects of having his team be featured. He did it with the New York Jets, and that isn’t an experience he’d like to go through again. If what he says is true, it appears that he’ll be getting his wish in 2016.

7) No extended West Coast stay, either

Ryan said #Bills didn't want a situation where they would have to stay on West Coast for a week & #NFL will accommodate.

- Twice over the past four seasons, the Bills have chosen to stay at a location to practice during the week, as opposed to having to travel too often. They did so in 2012 after playing road games in San Francisco and Arizona in back-to-back weeks, which led them to stay in Tempe for the week and practice at Arizona State University. This past season, the Bills spent the week just outside of London preparing for their first time in the NFL’s International Series.

That doesn’t appear to be the case for 2016, as the Bills have put in the request to have all three of their West Coast games (Los Angeles, Oakland, and Seattle) with at least a week in between. The logistical planning of doing that as an organization, likely combined with how the team played in London last year, led to Rex Ryan and the Bills opting for traveling West three separate times.