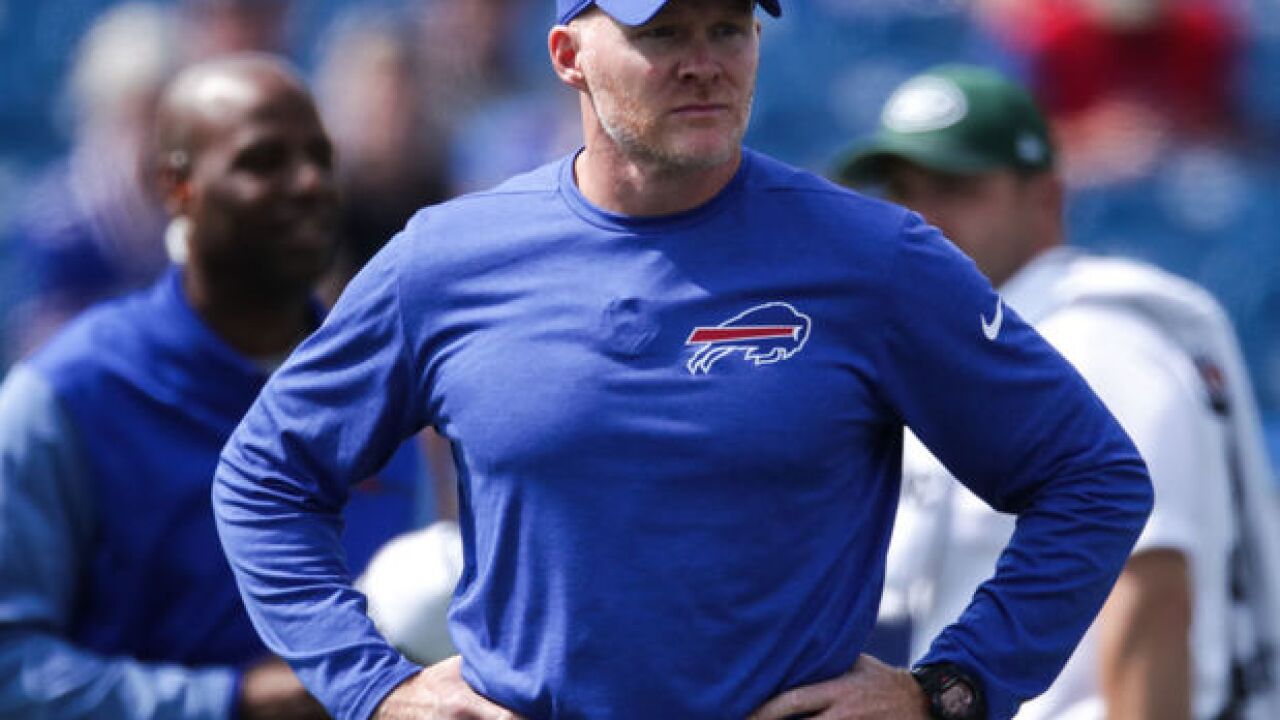 As Thursday’s practice came to a close, so did the second week of Organized Team Activities for the Buffalo Bills. The team is now six practices into this stage of the offseason, and have only one more week before all the workouts are no longer voluntary.

What happened at the most recent session of OTAs? Seven observations from the practice:

1) McCarron has a solid day with the 1s
- Unlike last week's session that the media was able to view, the Bills had A.J. McCarron, not Nathan Peterman, with the first-team offense. In his time with the top unit, McCarron showed excellent timing and rhythm with his receivers during 11-on-11s. He'll be the first to tell you that the timing aspect is the part of being a quarterback that he would most like to master, and throwing to the likes of Kelvin Benjamin, Malachi Dupre, Jeremy Kerley, and Rod Streater with the first unit, McCarron was solid all day long. It's a long road ahead for all of the offensive players fighting for a starting job on the roster, but McCarron showed much better than Nathan Peterman on Thursday, which is the second straight week that we've seen that happen.

2) No changes along the first-team offensive line
- In what we thought might be a rotation around the offensive line, the Bills had the same five offensive linemen with the first-team offense on Thursday as they did last week. That includes Dion Dawkins and Jordan Mills at left and right tackle, Vladimir Ducasse and John Miller at left and right guard, and Russell Bodine at center. That left both Ryan Groy and Wyatt Teller on the second unit for the second straight week. Now, there could be a natural explanation for this. Perhaps the Bills have a three-day rotation plan, which includes both Groy and Teller getting some work with the first-team offense and we've just seen days three and six to where there aren't any changes. The earliest we'll be able to see if that is indeed the case will be during the three-day mandatory minicamp from June 12-14, because the media is in line to see practice number nine of OTAs next week. However, if that trend does not change, it means the Bills may not have any intention of trying Groy out at guard -- which would be a slight surprise given the early retirements of both Eric Wood and Richie Incognito. Groy isn't even getting time with the second-team offense at guard. In the meantime, Teller continues to get work with the second-team, though this week it was at left guard and last week it was on the right side.

3) Taron Johnson has some competition at nickel
- The Bills saw the return of cornerback Vontae Davis to OTAs this week, which means we got our first clear view of the cornerback position and how it stacks up at this point. Last week when Davis was absent, the Bills used veteran Phillip Gaines with the first-team defense at outside cornerback, which allowed rookie and fourth-round pick Taron Johnson to take the reps with both the first and second-team defense. This time around with Davis in the fold, it was Davis with the first unit at right cornerback, and Gaines was working with the top group as the nickel corner. Heading into OTAs that was the expectation for Gaines, but now we have real confirmation that it will be Gaines versus Johnson, at least in the early going, for that critical role on the defense.

4) Marshall Newhouse takes on a new role
- The Bills made a few depth signings for their roster in free agency, with veteran offensive lineman Marshall Newhouse being among them. Last week Newhouse lined up at left tackle with the second-team offensive line, but today, they gave him a new challenge. On Thursday, Newhouse was lining up with the second unit at right guard, a bit of a switch from what the expectation was. It allowed Conor McDermott to get some reps at left tackle, with De'Ondre Wesley sliding outside to right tackle after playing left guard last week. They are likely testing the versatility of these pieces early on into the process to see if they can depend on them in those roles should there be an injury to a starting player. While I don't know if we'll see the humongous McDermott inside at guard anytime soon, the Bills are likely just seeing what they're working with during a low-pressure situation.

5) Tremaine Edmunds making a big impression amongst coaches
- Last week, I wrote how Edmunds appeared locked into the first-team middle linebacker role with the Bills, all while getting every single defensive snap with that first unit. With another week passed, not only has that trend continued, but the coaching staff is seeing significant strides made by the 20-year-old already. Defensive coordinator Leslie Frazier said that Edmunds' ability to gather and process information, and then to translate it to the field has been incredibly impressive to this point of the offseason, as has his ability to lead a huddle and be the leader of a defense because of his position. Frazier even went on to say that Edmunds reminds him of how well last year's first-round selection, Tre'Davious White, performed around this time of the year. As you might imagine, that's incredibly high praise considering White was one of the top defensive rookies in the National Football League in 2017. Edmunds couldn't have done more to impress his coaching staff through the first two weeks.

6) A pair of corners flash some ability
- The cornerback depth chart will be one that's up for grabs past the fourth guy, with the Bills potentially able to keep anywhere from one-to-three additional players on top of the perceived solidified four. That means it's an excellent opportunity for some young players to grab hold of a roster spot during the summer, and one place to help set them apart is right during the spring. Keeping that in mind, the Bills saw a pair of younger cornerbacks flash some ability on Thursday. The first of which is Breon Borders, who lines up at right cornerback with the second-team defense. A long and rangy corner, Borders showed his playmaking skills by picking off a pass late in practice. He's the type of cornerback from a size and skill-set standpoint that McDermott usually goes for in his outside corners, so he's certainly a name to monitor. With the third-team defense, I thought the play of undrafted rookie Ryan Carter stood out. He had a repetition where he filled the correct run-gap that went wide, and that would have dropped the running back for a loss on the play. It got the coaching staff excited and earned praise both from them and his teammates. It's just one play, but those big plays and knowing the playbook goes a long way for a young player trying to make an impression.

7) Potential punt returners identified
- When the Bills went into the special team portion of the practice, we saw them give us a glimpse who they're viewing as a punt return replacement to Brandon Tate. Of course, the Bills did not bring back Tate in free agency this past offseason, which left the job wide open. I saw four players -- all of which wide receivers -- take turns fielding punts. The group included Kaelin Clay, Austin Proehl, Jeremy Kerley, and Ray-Ray McCloud. Of the four, I might give the edge to McCloud at this point because he was the earliest drafted by this regime, and we've seen him have the ability while at Clemson. Still, this is a wide-open competition as training camp opens up in late July.