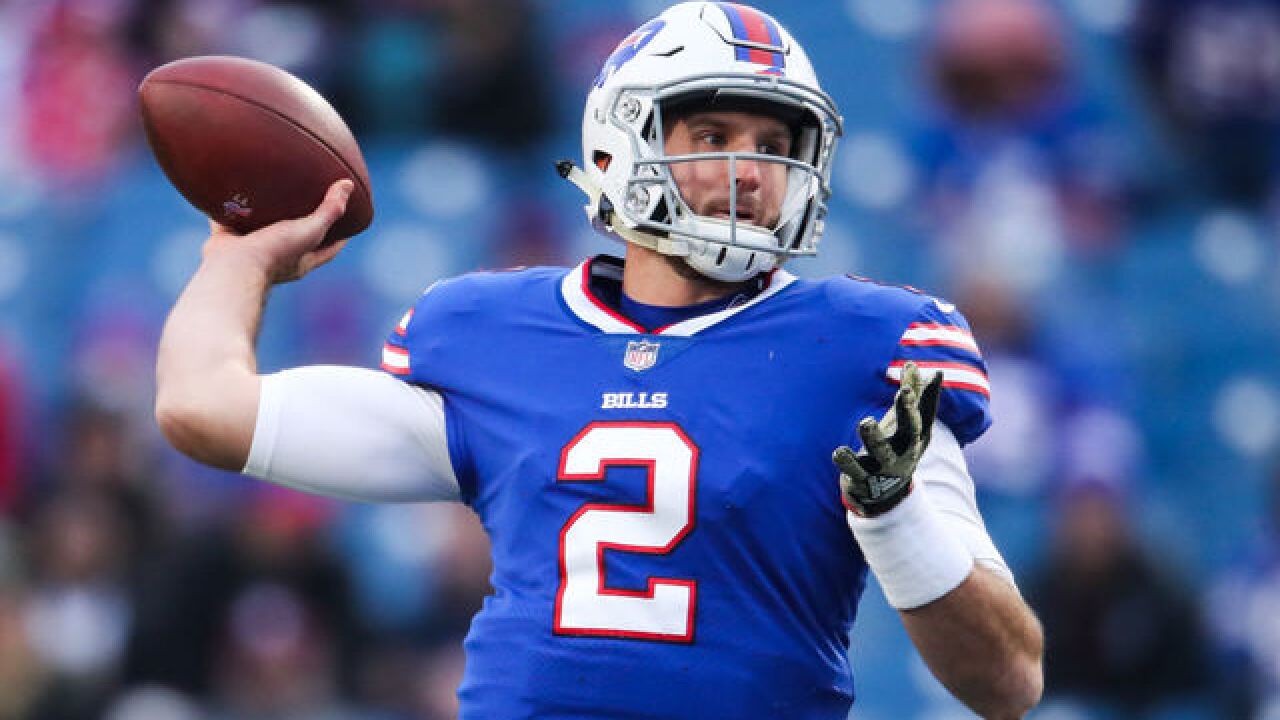 Things are getting real over at One Bills Drive. As the Buffalo Bills wrapped up the voluntary portion of the offseason last week, it was mandatory for the players to report to practice this week.

Tuesday marked the start of the annual three-day mandatory minicamp, the Bills' last hurrah before they break for six weeks ahead of training camp in late July.

What stood out on the first day of practices? Seven observations from the day of work:

1) Josh Allen takes a step forward
- All throughout OTAs, the Bills didn't want to commit to an increased workload for the first-round pick and rookie quarterback, Josh Allen by the time minicamp came around. Head coach Sean McDermott didn't rule it out, but he also wouldn't commit to giving the rookie more to chew on. On Tuesday, the Bills gave Allen a little bit more responsibility by giving him some reps with the first-team offense for the first time in his career. It wasn't something they took lightly, but they also admitted that this was a part of the plan they had set out for Allen when they initially drafted him. While he only took a series or two with the top unit, it was significant nonetheless. In those limited reps, Allen showed much of what he has throughout OTAs this spring -- an up-and-down affair. Allen went from one play where he zipped a pass in that no one else on the field could have by connecting with Kelvin Benjamin for a significant gain. On the next play, he threw the ball short and into double coverage, it deflected off the defender and straight into the air, and rookie linebacker Tremaine Edmunds picked off the pass. We're bound to see plenty more of these growing pains as it goes along, but the critical part about Tuesday was that the Bills felt he was ready enough to get some work with the first-team offense. I'd expect those rep counts to grow over the next couple of days, and when they get to training camp in late July.

2) Nathan Peterman shines again
- Don't look now, but Nathan Peterman is putting together a pretty solid spring. For the second straight practice that the media was allowed to see, Peterman was slinging the ball around incredibly well and both his accuracy and knowledge of the playbook has been evident.  Several times on Tuesday, he would help instruct the receivers where they should be, or what they should have done on a given play. That part of his approach has to be music to the Bills ears at this point, with nothing set in stone at the quarterback position. It's only the offseason workouts, and you should take everything with a grain of salt, but Peterman has been impressive -- as shocking as that may be for some fans to read. In the four practices we've seen, Peterman has been more impressive than veteran quarterback A.J. McCarron.

3) Bills give more significant workload to Robert Foster
- Last week I wrote about Robert Foster as a potential under-the-radar type to keep an eye on at wide receiver, and he was working in more and more with the top two units during Tuesday's practice. Now, there are some injuries that the Bills are dealing with at wide receiver at the current moment, but Foster has also been getting that time with the top unit ahead of the likes of some receivers that are perceived to have a better shot at making the roster -- namely, Rod Streater. With the extended time, Foster made some mistakes along the way. He dropped a couple of passes that needed to be caught -- one of which was a perfect throw from Nathan Peterman on an out route in which the receiver roasted the cornerback. He also fell on a route that the quarterback targeted for a potential first-down pickup. Even though he didn't have his best on Tuesday, the Bills are happy with what he's done to this point considering who he played ahead of to start minicamp.

4) Groy ahead of Bodine again
- Through the first two weeks, we saw Russell Bodine -- the free agent center acquisition -- get the first-team reps at center, with Ryan Groy nestled behind him on the depth chart. Last week, we saw a shift where Groy and Bodine flipped, and on Tuesday Groy was once again ahead of Bodine. It may just be an effort to get both players an equal amount of time with the top unit before they head to training camp, but it's looking more and more like an actual competition for the summer that will be won or lost in the preseason. And without either player practicing at either of the guard spots at all to this point, it seems that position is their only chance to start. It will be interesting to see how the Bills have the top offensive line unit situated on Wednesday -- as it will be the first time the media can see two consecutive practices.

5) Flip-flopping second-team offensive linemen
- Over the last few weeks there has been a bit of unexpected movement along the second-team offensive line. It all centers around two players in particular: Marshall Newhouse, the free agent acquistion, and De'Ondre Wesley, a relatively unknown player on the Bills roster. Both players have taken turns working both inside at guard, and outside at tackle as the spring has continued. It looks like finding players that can play more positions, and doing more with less with their backup offensive linemen, was a priority for the Bills. In 2017, they carried a lot of players at those positions, and it inhibited them in some other areas, which also left them woefully thin with an injury or two. As the Bills try to learn more about their new players, those two could compete with one another for a key swing spot for the reserve offensive line.

6) Dean Marlowe rising?
- Over on the defensive side of the ball, there isn't a lot of mystery as to what the final 53-man roster might look like. However, one unexpected player appears to be earning some extended opportunities -- and is also somewhat intriguing. Safety Dean Marlowe has been getting some time with the second-team defense in spots through the spring after mainly being an afterthought. It's hard not to notice Marlowe on the field, with a strong and long build that make him -- if ever pressed into duty -- an increasing option to cover tight ends. It needs to be stressed again that this is only the spring, but it appears that Marlowe could be one of the winners in the eyes of the coaching staff that's getting more opportunity as the practices have progressed.

7) Ray-Ray McCloud shows some zip, but also shows some rookie
- The wide receiver group has continued to be one of the more compelling things to track this spring because everything is still up in the air. It's given some opportunities to players like Robert Foster, and also allowed one of their rookie wideouts to get some key on-the-job experience this summer. To this point, between the wide receiver draft picks Ray-Ray McCloud and Austin Proehl, I've been most impressed with McCloud. He's gotten some reps as a punt returner and shows some natural acceleration in and out of his breaks during route running. McCloud is a bit on the smaller side, but he's intriguing enough for them to think there could be something there to build on.