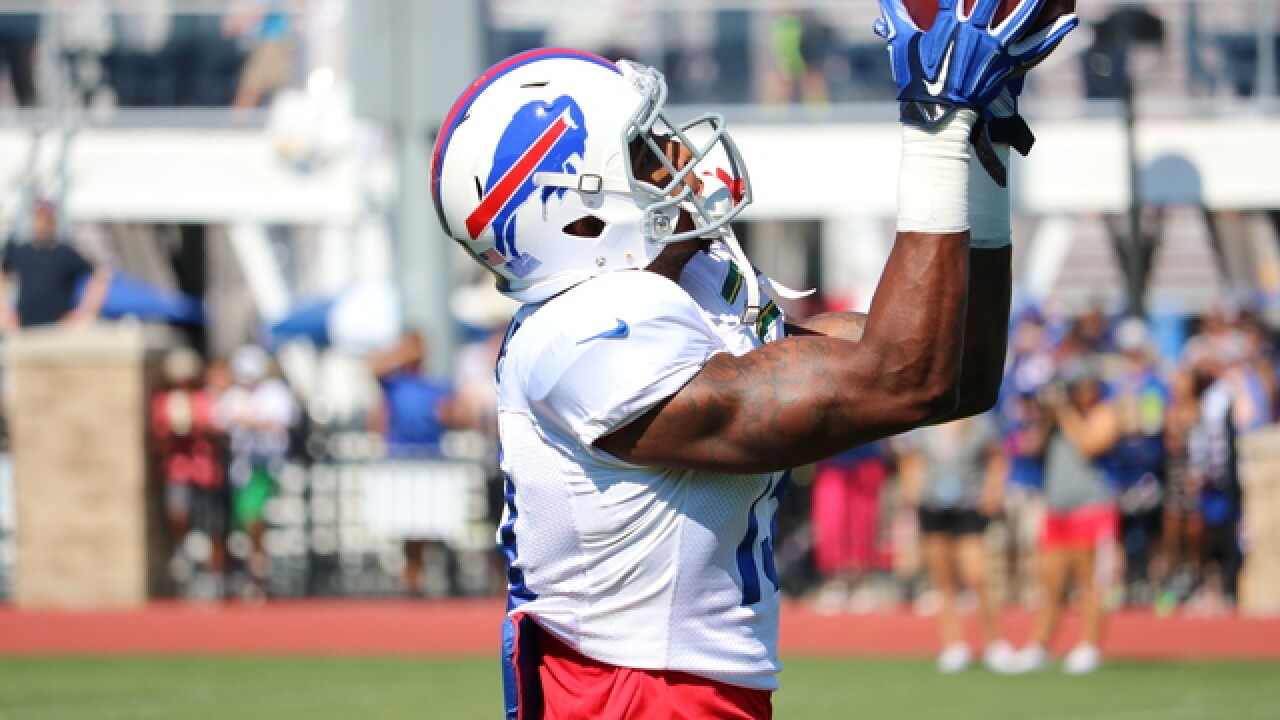 While there was a celebration of sorts over in Orchard Park with the renaming of their game day home, the players and coaching staff remained at St. John Fisher College for the final tune-up practice of the week. The Bills will now head back to Buffalo for the weekend as they prepare for the second preseason game of 2016 — against the New York Giants at New Era Field.

Last week for their final practice, the Bills were in shells and helmets and a pair of injuries were the result. This week, the Bills removed the shells and participated in an even lower intensity practice than what we saw last week. Even still, some impressions were made.

Seven observations from the final practice of the week:

1) Tyrod struggles quite a bit
- It was probably just a down day, but Taylor uncharacteristically was turning the ball over, and generally inaccurate with his throws. He did dial up at least one gem, a beautiful loft pass to Reggie Bush in the corner of the end zone during red zone drills, but he was mostly missing the mark. He was throwing passes wide, he put his receivers in position to take a big hit over the middle of the field (if there actually was hitting), there was a fumbled snap, and he was even picked off twice during the practice. Considering that Taylor was intercepted only six times in 14 games last year, dishing out two in a practice isn’t like him at all. It’s not anything to be concerned over, though, because Taylor has had a generally good training camp in 2016, and you can tell his confidence is really growing as a leader on the team. Just chalk this up as a bad day, and he’ll quickly have an opportunity to do that on Saturday with more time against the Giants than he had against the Indianapolis Colts.

2) Dareus injury?
- Even though the Buffalo Bills will be without the top defensive lineman on their roster for the first four games, near the end of practice on Thursday, the Bills had to shut down Marcell Dareus for the rest of the night. Dareus came off the field and was getting his right arm checked on by the training staff on hand at St. John Fisher College for a few moments, before walking away and spending the rest of practice talking to his teammates on the sidelines. Even then, it still looked like Dareus was cradling his right arm a bit, which indicated that it was still bothering him. After practice, he was spotted with a big wrap, and perhaps some ice on his elbow:

Marcell Dareus had his right arm/elbow wrapped up after practice #Bills pic.twitter.com/v2JhY7tLG5

Even though the Bills won’t have him until early October for the regular season, a potential injury to another one of their defensive players — especially in a low intensity practice — has to have the Bills scratching their heads a bit.

3) Duke Williams continues to stand out
- Perhaps the biggest development of the week, really since Aaron Williams suffered a concussion last week, has been outstanding since being put in with the first-team defense. He stood out last Saturday against the Colts, and all week he has risen to the occasion of getting more reps — and significant ones at that. All week he has been working next to Corey Graham with the first-team defense, and during tonight’s practice, he was flying all around the field and making his presence felt. On those plays that were referenced where Tyrod Taylor put his receivers at risk of taking a big hit, Duke Williams was always the one right there ready to pounce and deliver a big hit to try and force an incompletion. For this week at least, he has passed by veteran safety Robert Blanton on the depth chart, but we’ve seen this before with Duke Williams. His biggest test moving forward is keeping that type of play going for the long haul.

4) O’Leary shows up in a big way
- Of all the days at training camp to this point in the summer, tight end Nick O’Leary has mostly faded into the background, chipping in short-yardage catches every once and again while mostly working with the third-team offense. During Thursday’s practice, O’Leary was one of the most noticeable players on the field because he kept getting open. By my count, O’Leary made six different catches during 11-on-11 team drills on Thursday, and one of them came right at the end of the day when he corralled a red zone pass for a touchdown. It is likely that this is too little, too late for O’Leary, who is undersized, not quite as athletic as you’d like for an undersized player, and has mostly stayed off the radar. He will need a huge preseason effort, on both offense and special teams, to show that he’s worthy of a roster spot in 2016.

5) Dez Lewis in roster jeopardy?
- If we rewind to exactly two months ago, the Buffalo Bills just got done with their mandatory minicamp, and the Bills couldn’t stop raving about second-year wide receiver Dez Lewis. Through OTAs and the minicamp practices, Lewis was on fire and made several plays while working mostly with the first-team offense. That was then, and this is now — and now, Dez Lewis is struggling to keep up with the rest of the receivers that are fighting for a spot on the roster. As it has become a problem for him this summer, like it was last year, Lewis is fighting the ball and dropping passes — and he did so again on Thursday night. Since the pads went on and things have become more physical, Lewis has shown flashes of what they want him to do consistently, but he has mostly faded into the background. I would not be surprised whatsoever if the Bills were seriously considering keeping him off the final 53-man roster. However there is risk there, because he’s a fast, big-bodied wide receiver that is still young into his career. He still might make the roster, but I don’t believe it’s as sure of a bet as it once was.

6) Boykin steps up his game
- As Dez Lewis is fading, Jarrett Boykin did well with more reps on Thursday’s practice with both Sammy Watkins and Greg Salas watching from the sidelines. It’s especially important for him, due to Rex Ryan expressing at least a little disappointment that he leveled off during the first couple of weeks of training camp. On Thursday, Boykin certainly tried to make up for lost time with not one, but two highlight reel catches. On the first, he laid out for a pass on a flag route that beat Mario Butler, and made the diving catch for a big gain. Later on, EJ Manuel threw him an essential jump ball deep down the left sideline, and it looked like cornerback Jonathan Dowling actually initially caught the pass for an interception, and Boykin then ripped it out of his arms for another big gain down the field. Like Lewis, Greg Little, and others, Boykin is firmly on the bubble for the 53-man roster.

7) Striker showing well, but buried on depth chart
- Ever since the first night practice of training camp in 2016 took place and Eric Striker found himself working with the first-team defense for that one fateful evening, Striker has not been able to get back up to his initial lofty status early on in camp. While he continues to show solid ability rushing the passer at a position of major need due to injuries, more and more players have passed Striker by. IK Enemkpali recaptured his first-team status before getting injured, but Striker has also been passed by Lorenzo Alexander, undrafted free agent Bryson Albright, and even now, by the recently signed Kroy Biermann based on practice reps. For the most part, Striker has worked with the third-team defense — which doesn’t exactly bode well for him in making the roster in September. He zoomed right past third-string offensive tackle Marquis Lucas on two separate occasions for a sack, and when in, continued to get pressure off his side of the line. Perhaps it has something to do with his ability against the run, or on special teams, but the fan-favorite Striker just hasn’t been able to recapture his opportunities with the top unit.

Day 15 LVP: OT Marquis Lucas
- He struggled mightily all night long during team drills, surrendering one sack to Max Valles on Thursday night. He faces long odds to make the roster this fall.

Up Next: The Bills will take on the New York Giants on Saturday, August 20 at New Era Field, and kickoff is scheduled for 4:00 pm. The Bills next practice on Monday, August 22 for the final scheduled practice of training camp at St. John Fisher College from 6:00 to 8:00 pm. Practice is open to the public, but a ticket is needed for entry.

Miss a day of practice? Catch up with my daily observations: