5 takeaways from the Bills brass at MQC 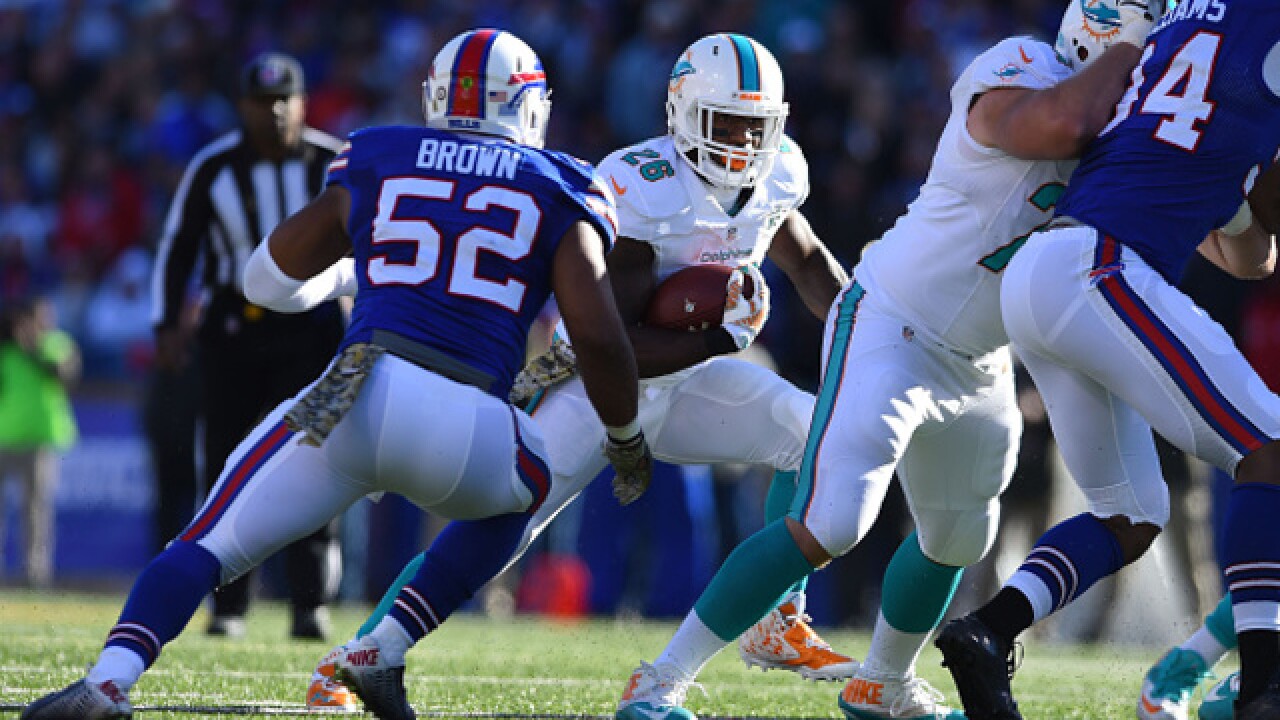 Rich Barnes
<p>ORCHARD PARK, NY - NOVEMBER 08: Lamar Miller #26 of the Miami Dolphins runs the ball as Preston Brown #52 of the Buffalo Bills defends during the first half at Ralph Wilson Stadium on November 8, 2015 in Orchard Park, New York. (Photo by Rich Barnes/Getty Images)</p>

After the NFL Draft winds down, all the dust settles, and the Buffalo Bills have a good idea of what their roster will look like for the upcoming season, they give some big fans of the team an inside look to their thought process on both the draft, and the upcoming season.

As it has become tradition, part of the Bills front office goes to speak at the annual post-draft event held by the Monday Quarterback Club. This year, it featured Bills Director of Player Personnel Jim Monos, in addition to Rob Hanrahan, the team's Director of Pro Personnel. Founded back in 1960, the former 'Touchdown Club' is a large group of fans that meet for events several times on Mondays throughout the year to talk about the Bills.

While they were addressing questions from the fans in attendance in the team's press box at Ralph Wilson Stadium, there were a few interesting tidbits of conversation about the players on the roster.

Here's what I took away from the conversation:

1) No mention of one notable player in the RT race

- When asked about Matt Slauson, the player the Bills hosted on a free agent visit just last week before he ultimately signed with the San Diego Chargers, Monos and Hanrahan were then pressed about the right tackle position as it stands today. While some of the information wasn't new -- the fact that there will be a competition to start at right tackle -- it was who they talked about. Perhaps even more importantly, it was who they didn't talk about, too. They made mention of both Jordan Mills -- the player at this point who I believe is the favorite to win the job, and Seantrel Henderson as two players that will factor into the conversation. Curiously absent from the thought? Former second-round pick Cyrus Kouandjio. Perhaps it was just a slip of the mind, but they made no mention of Kouandjio as someone that could push for the starting job this summer -- which isn't exactly the strongest endorsement for his short-term outlook. Entering his third season, Kouandjio has made only two starts for the Bills since entering the league, and could be in jeopardy of making the roster if the Bills add additional depth at offensive tackle.

- It's quite an interesting spring and summer coming up for veteran kicker Dan Carpenter. Already having had his contract restructured to take away some guaranteed money in the event that he doesn't make the team, Hanrahan brought up both the undrafted rookie kicker Marshall Morgan and kickoff specialist Jordan Gay as the trio -- not duo -- that will all compete for the job. Gay has been with the Bills for most of the last two seasons, but will now get a shot to be "the guy" along with the other two, although they said he needs to improve his accuracy if he's going to win the job. A note on the undrafted Morgan, as well: Special teams coordinator Danny Crossman identified him as one of just a few college kickers this year that could actually make it in the NFL. However, Hanrahan said if the Bills chose the rookie kicker as the winner of the competition, that they'd have to "ride the rookie roller coaster" and stick with him through thick and thin, being fully aware that the veteran Carpenter would be scooped up quite quickly elsewhere. It sounded like they had faith in Carpenter to return to his old, reliable ways, but were at least intrigued by both the leg of Jordan Gay, and the potential of Marshall Morgan.

3) No guarantees for Preston Brown, Ragland

- You might just file this under the #TeamSpeak distinction, because Doug Whaley was quite adamant that both Reggie Ragland and Preston Brown would play beside one another, but there were a couple of interesting lines from the event. Jim Monos called Ragland the prototypical middle linebacker, which many would agree with based on his skill-set. While he is an inside linebacker in the Bills 3-4, if lined up next to Brown, Ragland would be the weakside inside linebacker in the system, not the middle backer. Hanrahan also chimed in to say that he didn't want to flat out say those two would be the starters, which left a tiny window of opportunity for free agent acquisition Zach Brown. Even if it's only a slim chance that the duo doesn't start -- which it likely is -- it sounded as though the Bills wanted both of those players to earn it this spring and summer. Ragland took reps at middle linebacker during the first day of rookie minicamp, for what it's worth.

4) Non-committal on any WRs past the top two

- Past right tackle, the biggest question mark on the roster is at wide receiver. Sammy Watkins and Robert Woods are the starters, but the rest of the depth chart is an outright uncertainty. While it was confirmed that Woods would once again resume his role as a starter opposite Watkins, Monos and Hanrahan didn't offer up much decisiveness as to who else would be a contributor. They pointed to the spring and summer practices as a time for one of the many to step up, and brought up players that they signed in the offseason (Jarrett Boykin, Greg Little) that have some league experience. Those two, Greg Salas, Leonard Hankerson, Marquise Goodwin, Marcus Easley, Kolby Listenbee, Dez Lewis, Walt Powell, and a pair of undrafted free agents will all compete to make the roster this summer.

- Sure, the NFL Draft is all said and done, but the draft day slide of Ole Miss offensive tackle Laremy Tunsil was one of the most memorable in the event's history. Tunsil's social media accounts were hacked, and a video of him in a gas mask smoking something was released during the draft. Tunsil was reportedly taken off some teams' boards because of the video, and the one-time favorite to be the top player taken slid all the way down to Miami and the 13th selection. So, what would have happened if the slide came all the way to the Bills at 19th overall? While not completely tipping his hand, Monos said with a smile that there would have been a definitive conversation had in the draft room had Tunsil still been available. Monos also added that he hated seeing such a talented player going to a division rival like the Dolphins. Tunsil, along with North Dakota State quarterback Carson Wentz, might have been the only exceptions to the Bills desire to add a defensive player at 19th overall, and it would have made for a fascinating draft day decision.