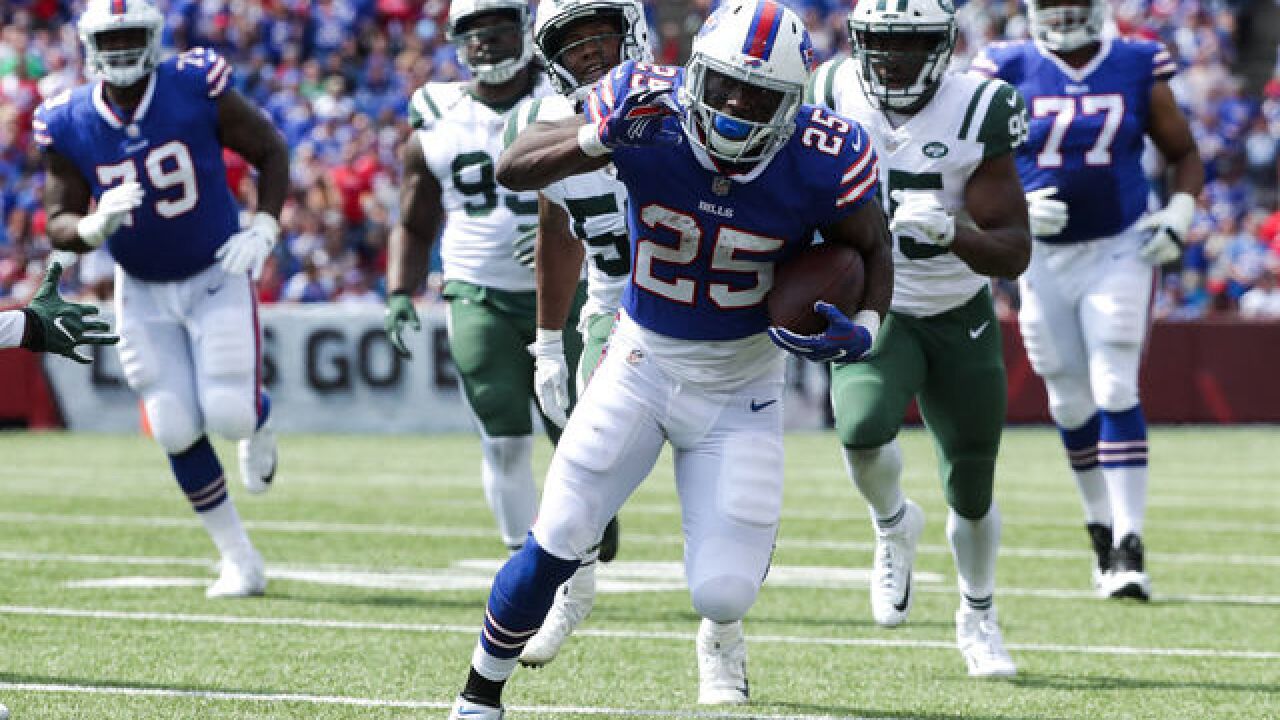 Copyright 2017 Scripps Media, Inc. All rights reserved. This material may not be published, broadcast, rewritten, or redistributed.
Tom Szczerbowski
<p>ORCHARD PARK, NY - SEPTEMBER 10: LeSean McCoy #25 of the Buffalo Bills runs the ball during the first half against the New York Jets on September 10, 2017 at New Era Field in Orchard Park, New York. (Photo by Tom Szczerbowski/Getty Images)</p>

Up next, a position that needs to build toward the future immediately — running back:

LeSean McCoy
2017 Season GPA: 3.14 (Snap Count: 779)
2018 Contract Status: $8.95 million cap hit, signed through 2019
Age: 29 (DOB: 8/12/1988)
- If it wasn’t for LeSean McCoy in 2017… I’m not sure where the Bills would have ended up on offense — or really in the standings. It was a frustrating year at times for McCoy — especially when teams were daring the Bills to pass the ball and they still couldn’t, but he was able to charge through to have a quality and highly productive season based on the factors he was facing. Think about it — he overcame a passing attack that never got going, an offensive coordinator that lacked creativity and insisted on his scheme being run through the first month of the season, an offensive line that faltered more than it did in 2016, and a loaded box to run against. For him to rush for as many yards as he did, and to be as effective as he was all year was remarkable. Even though he’s turning 30 in August, it does not appear that McCoy has slowed down at all from what we’ve seen over the last three seasons in Buffalo. He still has speed, vision, and a vicious jump-cut that leaves defenders in his dust and fans’ jaws on the floor. He will continue to be a focal point for the Bills offense — he just needs more help in the backfield than what he did in 2017.

Travaris Cadet
2017 Season GPA: 2.81 (Snap Count: 103)
2018 Contract Status: Unrestricted Free Agent
Age: 29 (DOB: 2/1/1989)
- Once the Bills came to their senses and started to use Travaris Cadet as the backup running back to McCoy, it wound up being a short-lived endeavor. He was injured in the second game that he overtook Mike Tolbert for the backup job, suffering a gruesome season-ending injury that required him to be carted off the field. When he was on the field, he provided a nice jumpstart to the position when McCoy needed a rest — and he really started to gain more trust as his time in Buffalo went on. More of a speedy back, Cadet kept defenses honest when he looked to bust a run out wide, rather than how defenses played the much slower Tolbert. Just like McCoy, Cadet still has some game to him, even though he’s 29 years old at the running back position — in which there seems to be a wall for those players in declining ability. He was a pleasant surprise in 2017 as a midseason pickup.

Patrick DiMarco
2017 Season GPA: 2.77 (Snap Count: 286)
2018 Contract Status: $2.05 million cap hit, signed through 2020
Age: 28 (4/30/1989)
- Playing a position that doesn’t receive a large role in the offense any longer, I thought DiMarco played really well in his role when called upon. As a lead blocker for the running game, he was a great asset to the team and McCoy gladly followed him or found other running room because he canceled out an oncoming linebacker or safety. DiMarco had his season grade dinged a bit because of some poor plays in the passing game — but that’s not really what he’s best at. I’d expect him to continue to play a similar role in 2018 as long as he keeps clearing up running room for the backs.

Mike Tolbert
2017 Season GPA: 2.73 (Snap Count: 223)
2018 Contract Status: Unrestricted Free Agent
Age: 32 (11/23/1985)
- When the Bills signed Mike Tolbert to the roster, fans thought they were getting a locker room presence, a special teams player, and a utility running back only to be used in the event of an emergency. The Bills, quite frankly, had other ideas. Tolbert was the main backup running back for all but two games that he was healthy. And for each one of those games, minus when he bowled over a Dolphins defender in Week 17, he was a frustrating factor in the Bills offense. More of a plodding runner, the Bills inexplicably gave him stretch runs to the outside way too often, and predictably, they went for either negative yardage or for small gains. As time went on, he became a bit of an albatross for fans of the team that immediately reacted whenever he would be on the field as opposed to McCoy, Cadet, or even Marcus Murphy. I think he’s solid for the locker room and a special teams asset, but his role was a little too large based on what he offered to the offense. They must upgrade the backup running back spot.

Those that did not have a snap, or had minimal snaps in 2017 but are signed for 2018: Marcus Murphy, Aaron Green

1) Draft a backup running back
- This really can’t be an overlooked part of the offseason for the Bills. They still have LeSean McCoy running at a high level, but they don’t want to go into a second straight year with nothing behind him. It doesn’t necessarily need to be in the first two or three rounds, but at some point, they need to invest a draft pick into a young running back that fits into Brian Daboll’s offense. They could use someone to spell McCoy and to develop as a potential starter once McCoy moves on to either retirement or a different team. This is a pressing issue, they can’t go into another year with Mike Tolbert, or someone like him, as their main backup to McCoy again.

2) If healthy, re-sign Travaris Cadet
- This will be a big ‘if,’ but Cadet actually showed some good things for the Bills when trusted to be the main backup runner in five different games. I spotted him at the team’s facility ahead of the Eric Wood press conference after the season, so he’s already working hard to get back into shape to be signed in 2018. An unrestricted free agent, the Bills can likely bring back Cadet on the cheap and see if he has the same ability as he showed last season. At best, they’d have their second or third-string running back heading into 2018 and a potential candidate to return kicks and/or punts. At worst, he loses a step due to the injury and they release him without owing much of anything on the salary cap. It’s a very low risk, medium reward type of signing — which probably makes it worth their time.

3) Sign an undrafted free agent or two
- This is really just to add depth to the position because you never know what kind of gem you might be able to find in the undrafted free agent market. The Bills still have Marcus Murphy and Aaron Green under contract, but it wouldn’t hurt anything to add another name or two in the hopes that one of them hits as a core special teams player — or better yet, even someone with potential that can help the offense down the line.