2017 Buffalo Bills All-22 in Review: Quarterbacks 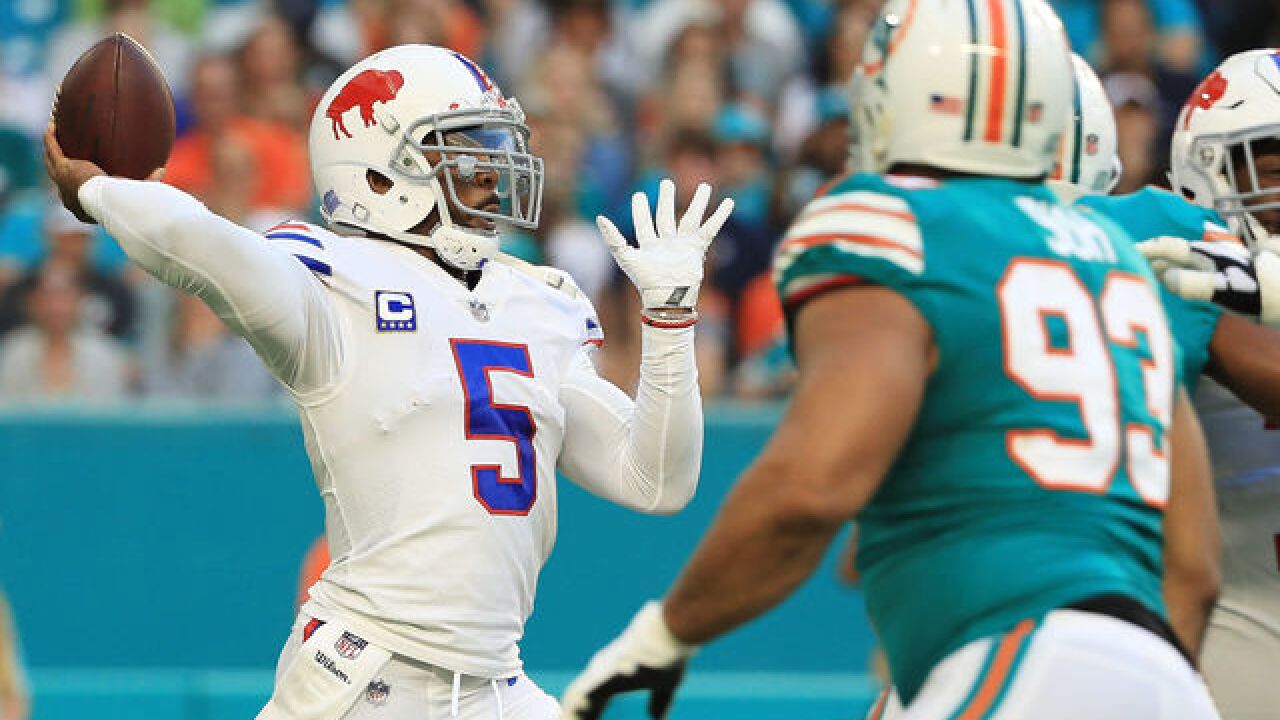 Copyright 2017 Scripps Media, Inc. All rights reserved. This material may not be published, broadcast, rewritten, or redistributed.
Mike Ehrmann
<p>MIAMI GARDENS, FL - DECEMBER 31: Tyrod Taylor #5 of the Buffalo Bills passes during the second quarter against the Miami Dolphins at Hard Rock Stadium on December 31, 2017 in Miami Gardens, Florida. (Photo by Mike Ehrmann/Getty Images)</p>

Up next, the position and what they do with it, will define their offseason -- and quite possibly the season to follow. It's all about the quarterback:

Tyrod Taylor
2017 Season GPA: 2.53 (Snap Count: 1,004)
2018 Contract Status: $18.08 million cap hit, signed through 2018 (2019-2021 voids if on the roster five days after 2018 league year Super Bowl)
Age: 28 (DOB: 8/3/1989)
- Given the green light to start for a third straight season for the Buffalo Bills, Tyrod Taylor continued to do the same things that led to this Bills staff needing him to have a major renegotiation of his contract in the offseason leading up to the campaign. While it wasn’t just his fault, Taylor’s was careful to a fault — and while it’s good that it limited interceptions, it was also a bad thing because the offense really couldn’t get out of the rapidly thickening concrete that was being behind in an individual game. Among the main points of contention, Taylor was just unable to consistently throw his players open — and on top of it, he didn’t consistently see the entire field well enough to take advantage of the weaknesses in the defense. On the upside, Taylor’s mobility and his Houdini-like ability to get out of what seemed like a sure loss of yards was a magnetic trait that kept making you think “Well, let’s see how he progresses.” As a passer, though, it just never fully came together for the Bills and Taylor. And in the early stages of the season, he was basically working in an offense that didn’t actually suit his skill-set. Former offensive coordinator Rick Dennison was hellbent on running his specific offense, regardless of the quarterback he had starting for him. Early on, there was a great deal of three and five-step drops from under center, when shotgun has always been the strength of Taylor. So, it was a combination of errors for Taylor — some his fault, and some not — but ones that he’ll ultimately be judged for considering his lofty cap number for the upcoming season.

Nathan Peterman
2017 Season GPA: 1.50 (Snap Count: 101)
2018 Contract Status: $614,877 cap hit, signed through 2020
Age: 23 (DOB: 5/4/1994)
- In one of the most memorable moments of the season, head coach Sean McDermott stepped to the podium ahead of the team’s Week 11 matchup against the Los Angeles Chargers and declared that the Bills — in a playoff position no less — were benching Taylor in favor of rookie Nathan Peterman. And the decision blew up spectacularly. Peterman put together a solid performance in mop-up duty against the New Orleans Saints the prior week, but that all went away in Los Angeles. His first interception was not his fault — while fired in a bit quickly to fullback Patrick DiMarco, it also hit the player right in the hands, bounced in the air, and landed in the arms of a Chargers defender. The next four interceptions in that fateful first half, though, were all on a trying-to-do-too-much Peterman. In all the years I’ve been grading the film, I have never given an ‘F’ to a player because there is usually some sort of redeeming factor of the game for that person. However, in the case of Peterman against the Chargers, the implosion was the reason that they lost the game, and the performance garnered an ‘F’ and a weighted GPA of 0 for that game. His biggest problem area in the season was throwing the ball with enough velocity on out routes — a concept that had him get picked off twice in such a limited sample size. It wasn’t all his fault because it was clear he wasn’t ready for that moment against a high-quality defense, and that’s on the coaching staff to sense those things. To his credit, he stuck with it and actually had a solid game against the Indianapolis Colts in the snow game — despite the conditions. Fittingly, after Tyrod Taylor was injured in the playoff game, Peterman came in the game — and ended it with an interception.

1) Do everything in their power to secure a first round QB they believe in
- We can sit here and discuss the virtues of trying to find a defensive tackle, a linebacker, a running back — or really anything else, but it’s all secondary to finally finding an answer to the question that has evaded the franchise since Jim Kelly retired. Who will be their next franchise quarterback? That must be the focal point of the 2018 NFL Draft — and you’d have to believe that it is for GM Brandon Beane as well. The trouble is, in order for them to do it and trade all the way up into the top six, it will likely cost them a great deal, especially if they’re trading into the top three or four picks. Would they be able to stomach the idea of trading both first-round picks, perhaps next year’s first-round pick, and something else to sweeten the deal? That might just be what it takes to get themselves the young quarterback they truly believe in. So whether it’s UCLA’s Josh Rosen, USC’s Sam Darnold, Oklahoma’s Baker Mayfield, or Wyoming’s Josh Allen that is the apple of their eye (and I’ll be writing more about that as we go along in the offseason), if the Bills want to secure that player, they are likely going to need to move all the way up to get the job done. And if there’s any GM that can do it, the wheeling and dealing Brandon Beane certainly isn’t afraid of the task.

2) Make the Tyrod Taylor decision by March 16
- In an ideal world, the Bills could wait until after the draft to make the Tyrod Taylor decision to see how the draft and free agency all shake out before making a firm decision on their own 2018 identity at quarterback. However, this isn’t an ideal world this offseason for them, and they have a deadline to make the decision on Taylor. On March 16, Taylor has a $6 million roster bonus due that becomes fully guaranteed both in the money they have to pay him, and against the salary cap. At the present moment, if the Bills were to walk away from Taylor today, they would be on the hook for $8.64 million against the cap. If March 16 comes and goes, that increases their minimal cap hit for Taylor to $14.64 million if they were to part ways with him. With that in mind, that puts a bright red circle around Friday, March 16 as the day they must make a decision to either trade or release him. And at this point, you’d have to think the odds favor the Bills moving on ahead of the 2018 season — but in the NFL, you can never truly rule out anything.

3) If Tyrod is moved, wait until after the draft and sign a veteran
- Obviously this is all dependent on the ultimate decision they make on Tyrod Taylor, but even if they are able to secure a potential young quarterback to be their future starter, they’re going to need a veteran presence on the roster to at least be the backup as they continue the development of Nathan Peterman as a potential backup of the future. The reasons for waiting until after the draft is important, too. If they were to get into the early market for players like Case Keenum, Sam Bradford, or whoever else for the short-term, that would cost them so much that it would cancel out the high 2019 compensatory pick they could be receiving for losing E.J. Gaines via free agency this offseason. Plus, if the goal is to eventually turn the keys over to the young draft pick, signing a player to that contract for anywhere from 0 to a full year’s worth of starts doesn’t seem all that worth it to me. In my opinion, the better course of action would be to wait until after the draft (in the hopes that they land the young quarterback) and then to sign a moderately priced veteran that the young player can work with on his development of learning how to be a professional quarterback. There is also the option of the Bills waiting to see who gets released from their current contracts too because that wouldn’t count against their compensatory formula for 2019. Either way, the Bills must first make the decision on Taylor and then have a direct plan of attack to accomplish all of their goals.