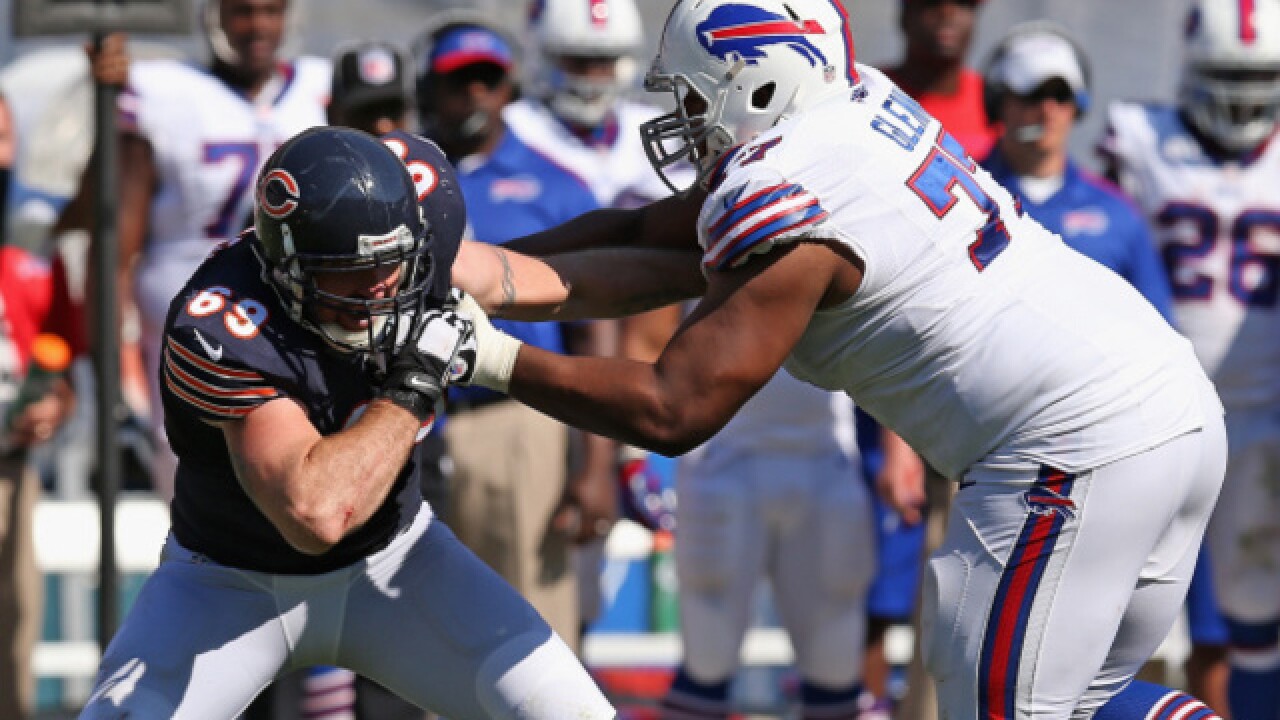 For the Buffalo Bills and all but two franchises in the NFL, the reality of the offseason has set in. Preparations by teams of how to attack the offseason, their own free agents, and late April’s draft are starting to take hold.

Up next, we take a look at a position that begs a big decision to be made in the upcoming offseason -- offensive tackle:

Cordy Glenn
2017 Season GPA: 2.96 (Snap Count: 275)
2018 Contract Status: $14.45 million cap hit, signed through 2020
Age: 28 (DOB: 9/18/1989)
- Marred by injuries to both feet, 2017 was truly a frustrating season for both the Buffalo Bills and Cordy Glenn. However, even when he was on the field — and still dealing with those injuries — Glenn played at a fairly high level and was garnered the highest grade amongst the offensive tackles on the team. When healthy, he’s truly a top-flight left tackle in the league — though as a 330-pound offensive tackle dealing with multiple foot injuries, you’d have to think the Bills have a legitimate concern if Glenn can actually get back to that form. Whenever it seemed like he was about to turn a corner to full health, he had a setback and had to be sidelined for several weeks again. Glenn was scheduled to have yet another procedure on his foot, which could add further worry to the Bills and other teams. Because of that factor, the presence of Dion Dawkins his age, and the money involved (more on that shortly), it’s really tough to project him into the future with the Bills, which is usually a precursor for a move of some sort.

Dion Dawkins
2017 Season GPA: 2.68 (Snap Count: 861)
2018 Contract Status: $950,736 cap hit, signed through 2020
Age: 23 (DOB: 4/26/1994)
- The two top draws of the 2017 rookie class were cornerback Tre’Davious White and linebacker Matt Milano, but Bills fans should feel optimistic about the job Dion Dawkins did as a first-year, almost full-time starting left tackle in the NFL. Dawkins had absolute moments of brilliance in run blocking — which is where he was at his best. Now, he does need to work to become a more consistent pass blocker, but he also showed some flashes of potential throughout the year in that area as well. The Bills got a really good base of work from Dawkins for his rookie season — enough where they should feel comfortable with slotting him into the starting left tackle job for 2018 and beyond to see just how much better he can get. At the very worst, based on last year, they have an average to slightly above average starting offensive tackle in the league. And as we’ve seen in the NFL, it could be much worse on the offensive line.

Seantrel Henderson
2017 Season GPA: 2.61 (Snap Count: 47)
2018 Contract Status: Unrestricted Free Agent
Age: 26 (1/21/1992)
- After serving the remainder of his 10-game suspension, Seantrel Henderson came back to become a reserve tackle, and sometimes the 6th offensive lineman on the field when the Bills wanted to go into a heavy set up front. Not really having enough time to make a big impression on the field, that’s likely a good indication of what they think they had in the former starting right tackle. He really started off training camp with a strong summer, but eventually started to struggle in the preseason — and by the time he was back from his suspension, both Dawkins and Jordan Mills were entrenched in their roles. As a soon-to-be unrestricted free agent, it’s likely that the Bills move on from Henderson.

Jordan Mills
2017 Season GPA: 2.23 (Snap Count: 1,103)
2018 Contract Status: $2.15 million cap hit, signed through 2018
Age: 27 (12/24/1990)
- For yet another season, Jordan Mills took the majority of the snaps at right tackle, but I have to admit — his consistency in 2017 was far better than what we saw in previous years as the team’s starter. You can tell just by watching him on film how much he cares and tries to be in the right spots every single time. However, there are times his lack of athleticism and recognition leave him in a tough spot. I believe the Bills should look to find a new starter at the right tackle position — even if they elect to move on from Cordy Glenn, but I think there is a solid case to be made to keep Mills around as competition to be the third offensive tackle in the event of injury. He would be a solid depth player, in my estimation.

Those that did not have a snap in 2017 but are signed for 2018: Conor McDermott*, Josh James, Aaron Green
*Took one snap in snow game vs. Indianapolis that was unable to be graded

1) Trade or release Cordy Glenn ahead of March 16
- This date is so incredibly important for the Bills to make a decision, based on how terrible Cordy Glenn’s contract in 2018 is for the organization. Glenn, who the Doug Whaley regime committed to for the long-term, allowed a substantial deadline day for Glenn’s contract in 2018. Here’s why March 16 is so important: According to his contract numbers (per Spotrac.com) in order for the Bills to part ways with Glenn — whether it be via trade or by releasing him outright, they would be on the hook for $11.1 million to their salary cap in dead money — which is bad enough as it is. On March 16, an additional $6.5 million of Cordy Glenn’s base salary guarantees, and if he’s still on the Bills roster when that hits, that automatically gets tied to their cap, even if they trade him. So on that day, to get him off the roster, it would cost them $17.6 million against their cap. And if they waited until after March 18, when a $2 million roster bonus is due, it would cost the Bills $19.6 million against their cap to part ways with Cordy Glenn. Now, they could ride it out in 2018 with Cordy Glenn on the roster with a $14.45 million cap hit, and a much more tolerable exit strategy in 2019. However, that would be a tough pill to swallow for what is now an injury risk, and with the potential to save at least over $3 million (possibly more if they designate it a post-June 1 exemption) on this year’s salary cap. So you see, if the Bills want to get resources for Cordy Glenn, it’s going to need to be before the start of the new league year.

2) Draft a tackle in 3rd round or later
- While the Bills could certainly take a tackle (or really, any number of positions) with one of their two first-round picks, you have to look at the Carolina draft strategy over the years — and they haven’t exactly had the best offensive tackles heading into those drafts, either. Since the Panthers took Cam Newton first overall in 2011, the earliest they have selected an offensive tackle over that span of time was with the final pick in the second round in 2017 (Taylor Moton), and then with a fourth-round pick in 2015 (Darryl Williams). Seeing as how the Bills just selected an offensive tackle in the second round in 2017, that likely drops the probability that they prioritize that on draft day — unless an absolute stud falls to them at 21 or 22. The value is in the mid-rounds with offensive tackles, so that should be a spot to pull the trigger on one. If the player is good enough, they can step in and start right away at right tackle — which would make either Jordan Mills or Conor McDermott expendable. Or, they could just go into the season with four offensive tackles — which is something they’re clearly okay with given the fact that they held five on the roster for multiple weeks during the 2017 season. At worst, it provides a potential three-headed competition for the starting right tackle job, and another tackle to develop over time once the contract of Jordan Mills runs up.

3) Continue to develop Conor McDermott
- He’s not a name you often hear about, but he’s someone the Bills believe in. I asked offensive line coach Juan Castillo in the middle of the season about McDermott and what they see in him, and they believe that he has the potential to compete for a starting job. He was no doubt their project in 2017 — and an additional draft pick (a sixth-round pick in 2017) for the Bills last year after scooping him up off of waivers from New England. They really like his length (6-foot-8), athleticism, and his work ethic -- and if he puts on some more weight, it could put him in the conversation to potentially start at right tackle in 2018. Don’t be surprised if you see him getting some legitimate run in the spring or summer months.