2017 Buffalo Bills All-22 in Review: Linebackers 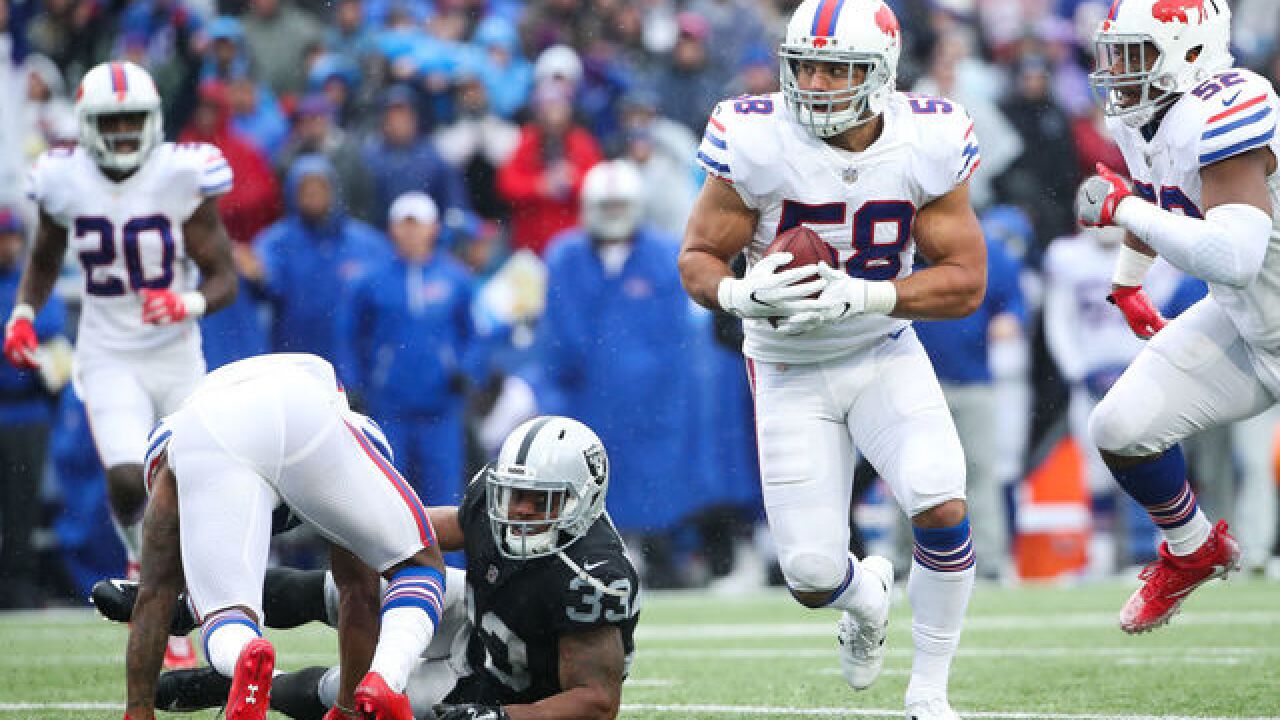 Copyright 2017 Scripps Media, Inc. All rights reserved. This material may not be published, broadcast, rewritten, or redistributed.
Tom Szczerbowski
<p>ORCHARD PARK, NY - OCTOBER 29: Matt Milano #58 of the Buffalo Bills runs with the ball after recovering a fumble during the second quarter of an NFL game against the Oakland Raiders on October 29, 2017 at New Era Field in Orchard Park, New York. (Photo by Tom Szczerbowski/Getty Images)</p>

Up next, a position that quite possibly needs two new starters in 2018 — linebacker:

Matt Milano
2017 Season GPA: 3.02 (Snap Count: 452)
2018 Contract Status: $620,379 cap hit, signed through 2020
Age: 23 (7/28/1994)
- For the first few weeks of the season, the Buffalo Bills dealt with below average linebacker play from both of their starting players that were out there nearly 100-percent of the snaps. And then, once Ramon Humber suffered a thumb injury, there was suddenly a bright ray of hope and optimism in the form of Matt Milano. A fifth-round rookie, Milano took to Sean McDermott’s defensive scheme like a fish to water. Milano has the required athleticism and was flying all over the field. He played with great recognition ability, and diagnosed plays quickly enough to react and make a difference. And, he wasn’t a liability in coverage — as opposed to the three men that had been starting. The Bills didn’t go #FullMilano until after a few weeks of having Humber back in the lineup, and then the natural shift occurred. He is plugged in as a starting outside linebacker for the foreseeable future, and as one of the best defenders on the team last season, it’s looking like they found themselves a big-time steal in the fifth round of the 2017 NFL Draft.

Lorenzo Alexander
2017 Season GPA: 2.60 (Snap Count: 718)
2018 Contract Status: $3.55 million cap hit, signed through 2018
Age: 34 (5/31/1983)
- Following a breakout season in 2016, Lorenzo Alexander shifted into a bit of a different role in 2017 based mainly off of necessity. The Bills really didn’t have any other options to start at strong side linebacker, and while it wasn’t an ideal fit, it was an ongoing process for the Bills to try and understand and implement the role that best worked for him. When Alexander was on the field too much on defense and in two linebacker sets, he really struggled. At this point in his career, he’s not made to drop into coverage as much as they had him doing, and his best asset is as a pass rusher. As the season went on, the Bills began to understand how to best utilize Alexaner — to which they completely lowered his snap count to under 50-percent most weeks, and used him in obvious pass rushing situations. His productivity returned upon the revelation, and it proved his worth especially heading into a 2018 where there are still questions at linebacker. Even though he’ll be 35 before the season begins, having him as a situational pass rusher — and as a leader in the locker room — is well worth the $3.55 million cap hit.

Preston Brown
2017 Season GPA: 2.39 (Snap Count: 1,158)
2018 Contract Status: Unrestricted Free Agent
Age: 25 (10/27/1992)
- At some point, you have to really feel bad for Preston Brown. He’s been dealt a bad hand in Buffalo — essentially having to learn and run a defense that didn’t fit him for three out of his four seasons. His rookie season was his best, and the system fit is a pretty clear indicator for this thumping downhill 4-3 middle linebacker. In Sean McDermott’s scheme in 2017, he certainly gave it his best shot. He slimmed way down, he improved his athleticism, and tried to be that zone coverage linebacker that the head coach so covets. The trouble is, that just isn’t his game. He was at his best and brightest when he was getting downhill to try and stuff the run. He has a true knack for that. However, too often he was caught out of position in zone defense, or was played by a play action pass, which led to intermediate to big gains over the middle of the field. For someone that was on the field as much as Brown, the Bills can’t afford to have that again.

Ramon Humber
2017 Season GPA: 2.36 (Snap Count: 628)
2018 Contract Status: Unrestricted Free Agent
Age: 30 (8/10/1987)
- As is the case with Preston Brown, I thought Ramon Humber was especially effective in downhill run support, and even when asked to blitz. However, where the rookie Milano flew by him on the depth chart was in comfortability in dropping back into coverage and with having a good feel for the zone. Another area that Humber really struggled in was securing tackles, missing quite a few opportunities to bring down the ball carrier initially. A career special teams player, Humber was more in his element after Milano went to the starting lineup full-time and the veteran could play a huge percentage of the kickoff and punt snaps.

Those that did not have a snap, or had minimal snaps in 2017 but are signed for 2018: Tanner Vallejo, Deon Lacey, Xavier Woodson-Luster

1) Let Preston Brown hit free agency
- As I said before, this season wasn’t Preston Brown’s fault — and just like Nigel Bradham a few years ago after being stuck in Rex Ryan’s scheme (which wasn’t right for him), Bradham signed with the Philadelphia Eagles and he’s fulfilled his potential as a top-tier outside linebacker. I have no doubt that Preston Brown will find a home — and likely one that suits his skill-set quite well. I would not be surprised to see him flourish elsewhere, but it just wasn’t a strong fit from the outset and I don’t think it would be wise for the Bills to try to make it work, either. Brown is one of the three unrestricted free agents — along with cornerback E.J. Gaines and wide receiver Jordan Matthews — that is likely to garner interest on the open market. While Brown’s eventual free agent contract won’t be a huge one, he’s still only 25 years old and might sign for more than many are expecting. Letting him walk could help them secure a 6th or 7th round compensatory selection in 2019 — or, it could give them the flexibility to go out and sign a free agent at around the same salary level without having fear of it cancelling out the potential picks they could get for Gaines and Matthews.

3) Re-sign Ramon Humber
- Despite some of his limitations as a defensive player, Humber provides a lot of value as a core special teams player — and now as a depth player after showing that he could do the job and even flourish at times. His cost should be fairly low for the Bills to be able to bring back as a backup linebacker. I think it would be in their best interest to build around him with their depth linebackers and bring him back for the 2018 season.