2017 Buffalo Bills All-22 in Review: Guards/Centers 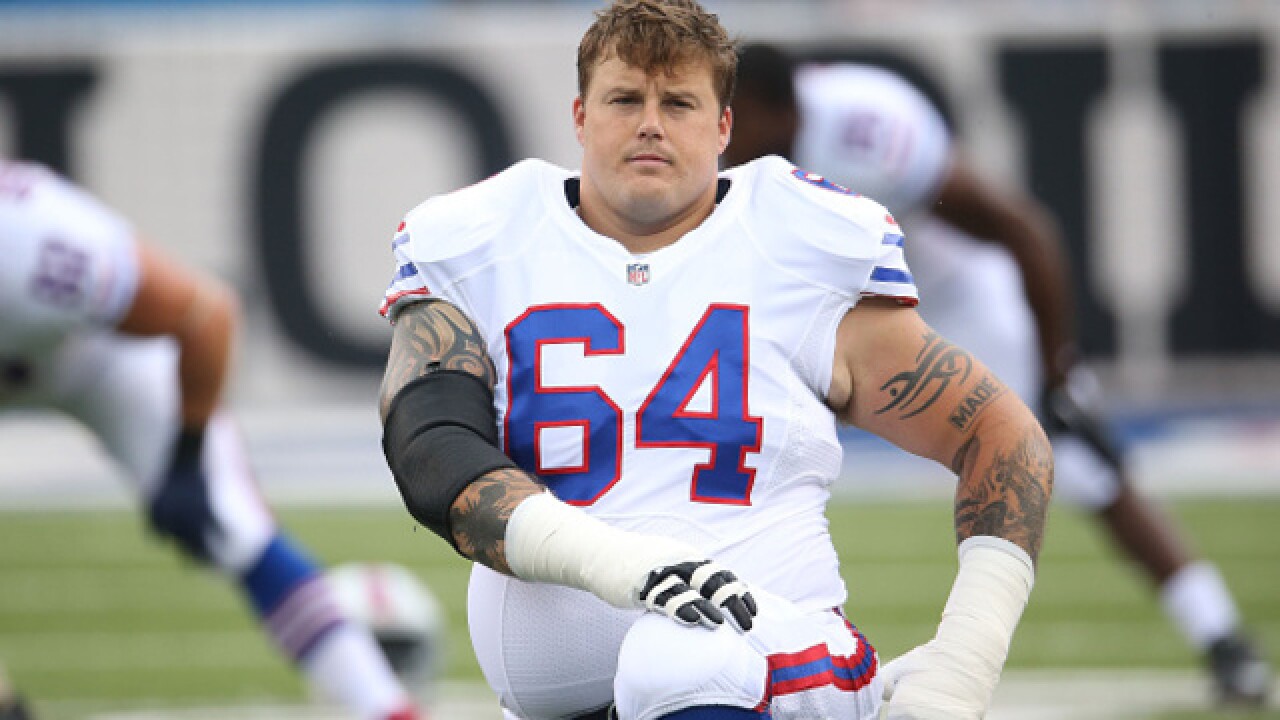 Up next, a position that is about a year away from what could be a complete reboot, the interior offensive line:

Eric Wood
2017 Season GPA: 2.89 (Snap Count: 1,132)
2018 Contract Status: Signed, but unable to play due to health
Age: 31 (DOB: 3/18/1986)
- The highest graded interior offensive linemen that they had in 2017 by my grading, the Buffalo Bills thought they had their center spot locked up for at least the next two seasons after they had inked Eric Wood to an extension ahead of the past season. That is until his end-of-season medical check happened. Wood has now been deemed unable to play due to a neck injury, no matter if any surgery or rehab is done, meaning the Bills will now see one of their deepest positions become quite weak like all the rest. It’s definitely a setback for the Bills, who just have to add one more position to add on the offseason list. Wood was a leader in their locker room, and a steadying force along the offensive line — to which the Bills will sorely miss his presence.

Richie Incognito
2017 Season GPA: 2.88 (Snap Count: 1,111)
2018 Contract Status: $7.575 million cap hit, signed through 2018
Age: 34 (DOB: 8/5/1983)
- It was another Pro Bowl year for Richie Incognito, who was one of the lone representatives in the game for the team. He was a good player for the Bills for much of the year and made a lot of key blocks when the running game was going, or when he was in a one-on-one matchup. However, what we also saw was a few more beats than we were used to — mainly because he was so good in his first two seasons that we rarely witnessed it happen. Heading into a season in 2018 where he’ll be 35 years old and with only one year left on his deal — and now with his best buddy in the locker room Eric Wood unable to play any longer — you have to wonder if the upcoming season is the last one for Incognito’s career and if he’d elect to retire. The Bills could conceivably walk away from Incognito and get savings on their cap of over $6 million in 2018, but given the Eric Wood surprise, I would think they want to keep their best remaining and healthy offensive lineman on their roster for the upcoming season. He’s still got plenty of game left, despite his age by NFL standards.

Ryan Groy
2017 Season GPA: 2.75 (Snap Count: 67)
2018 Contract Status: $2.5 million cap hit, signed through 2018
Age: 27 (DOB: 9/30/1990)
- Although there was some clamoring from Bills fans for Groy to be inserted into the lineup at right guard rather than either John Miller or Vladimir Ducasse, the Bills never agreed with that notion. In 2017, all of Groy’s snaps came either when Richie Incognito was temporarily out of the game, or when the Bills went to a heavy set with six offensive linemen. In those instances, he did fairly well — just as he did in extended duty in 2016 when Eric Wood went down with an injury just a little past halfway through the season. Groy started the rest of the way and proved his value to the team — so much so that they matched an offer sheet that he signed as a restricted free agent last year. Now, Groy can shift into the starting center role which has proved to be his most natural fitting position since coming to the Bills.

Vladimir Ducasse
2017 Season GPA: 2.73 (Snap Count: 876)
2018 Contract Status: $1.533 million cap hit, signed through 2019
Age: 30 (DOB: 10/15/1987)
- In my opinion, the positive performance of Vladimir Ducasse in 2017 was one of the biggest surprises of the year. Following a poor training camp and preseason, Ducasse was made inactive through the first four weeks of the season and he was written off — although remained on the roster. In Week Five, he was given the starting right guard position after John Miller had struggled, to the complaints of many fans out there. However, Ducasse was head and shoulders above Miller in terms of efficiency as the starting player at that position. He seemed like a much more natural fit and even carried a GPA around 3.00 through his first five starts. Over that span, he turned a position of weakness into a temporary strength. Now, down the stretch, he saw his level of play dip to a more average level, but the whole season effort was good enough for there to be no questions as to who the superior player was at right guard. The key here for him will be as to what blocking scheme new offensive coordinator Brian Daboll uses. However, he’s signed through 2019 and he did well enough last year to be a backup option — if not the starter at right guard to begin 2018.

John Miller
2017 Season GPA: 1.87 (Snap Count: 256)
2018 Contract Status: $2.075 million cap hit, signed through 2018
Age: 24 (DOB: 8/12/1993)
- In his third professional season, John Miller was in a poor fit of a blocking scheme and struggled all through the summer and in his four starts to begin the 2017 season. It was truly a disappointment because the former third-round pick seemed like he had really turned a corner in 2016 and looked like a long-term option at right guard. Miller struggled to keep the pocket clean from his one-on-one battles and fell off his block too often to avoid eventual replacement. He suffered an in-practice injury during the middle of the year, but even with that, he was never really a consideration to be dressed on game day after he was benched in Week Five.

1) Insert Ryan Groy into the starting lineup
- I don’t believe that the Bills should overthink this with Ryan Groy. They’ve got a player that has proved to be a capable starter for an extended stretch, and they have him at an extremely affordable cost to their salary cap. Center has been a popular mock draft target with one of the Bills’ two first-round picks lately, but too many people are forgetting about Groy’s performance in 2016. I think there’s a good chance they give him every opportunity to be the starting center in 2018. If he becomes an issue, then it can be addressed significantly in the 2019 offseason — which seems like a pretty clear reboot year for the interior offensive line, especially if Richie Incognito retires. The depth of the interior line was amongst their strongest this past season, so for the 2018 offseason and with the number of needs they have elsewhere, it would probably be in their best interest to let the depth naturally fill into starting roles, and address the back-end as opposed to trying to come away with a starter in the draft. They could always sign a center that was deemed a cap casualty by his last team but only in a move that would not prohibit them from landing multiple compensatory selections in 2019.

2) Try to trade John Miller
- It’s been a disappointing development for the Bills and their fans with the former third-round pick, but this offseason feels like it’s setting up to be a parting of the ways for the two sides. As a full-time starter in 2015, he struggled in his rookie season — only to come back and have a good and encouraging sophomore campaign in 2016. Then in 2017, with a new offensive scheme and coaching staff, the bottom fell out and he had to be replaced by a journeyman offensive lineman. Still with one year left on his contract, and with a solid 2016 season to his name, I would not be surprised if the Bills try to flip him for a late round pick leading up to the 2018 NFL Draft, considering that it could save them almost $2 million on the cap, and they could get something for someone that they showed a lack of belief in following the first quarter of the season. Even if they aren’t able to trade him, I wouldn’t rule out them just cutting him as a cap casualty at some point ahead of the 2018 season. His cap number is $2,075,030, and his dead cap hit would be only $170,030, which is a total saving of $1,905,000 towards this year’s cap. The destiny of yet another one of Doug Whaley’s higher draft picks is trending towards not being in Buffalo.

3) Draft a swing interior lineman to develop
- If the Bills head into the season with a combination of Incognito, Groy, and Ducasse as their starting interior offensive line, that would be a serviceable unit heading into the 2018 season. However, they would certainly need to address the vacated depth with both Eric Wood and potentially John Miller moving on. The best way to do this would be to look at selecting a player that has potential to play either guard or center in the third round or later. That’s where you’ll find the most value on players at the position, and since they don’t need to go for an immediate starter, they can afford to wait. However, best case scenario, if that player becomes a hit at training camp and in the preseason, you insert him into the starting lineup and then move either Ryan Groy or Vladimir Ducasse as the top reserve. The matter is not a pressing one based on the legwork they did in the 2017 offseason, which is why it doesn’t need to facilitate using a high pick on the interior line.