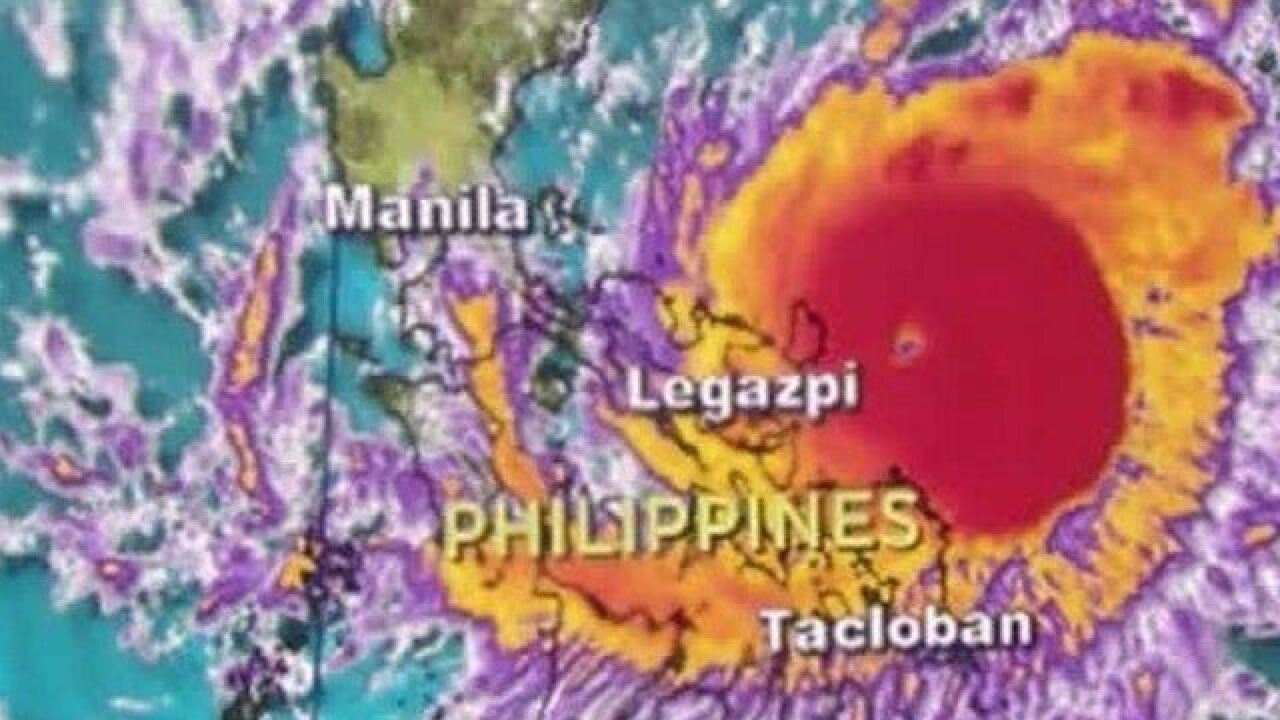 MANILA, Philippines (CNN) -- Super typhoon Nock-ten made landfall in the Philippines on Christmas Day after authorities worked to evacuate thousands of residents from low-lying areas of the Southeast Asian country's eastern provinces.

At 8 p.m. local time (7 a.m. ET), authorities said the typhoon, known locally as Nina, made landfall over Bato in the province of Catanduanes.

The storm hit the Bicol region with moderate to heavy rainfall, according to the Philippine Atmospheric, Geophysical and Astronomical Services Administration (PAGASA).

The Joint Typhoon Warning Center (JTWC) reported that Nock-ten has weakened and now has maximum sustained winds of 240 kph (149 mph) with gusts up to 296 kph (184 mph). The typhoon remains a category 4 equivalent, according to CNN's Severe Weather Team.

The provinces of Catanduanes and Albay have been declared under a "state of imminent danger/disaster."

The storm is expected to traverse the provinces of Camarines Sur, Camarines Norte, Southern Quezon, Laguna, Batangas and Cavite. The storm had been forecast to move west at 15 kph (9 mph).

The National Disaster Risk Reduction and Management Council reported 11,476 passengers, more than 1,000 cargo ships and over a dozen other vessels were stranded in various ports in the region.

The Philippines' tropical cyclone warning signal number 4 had been hoisted for Catanduanes and neighboring Camarines Sur. The warning signal, the second-highest level on the scale of alerts, indicates the storm could cause "heavy damage" to high-risk structures. Rice, corn and coconut plantations will likely suffer severe losses.

A storm surge height of up to 2.5 meters is possible over the coastal areas of Camarines Sur, Camarines Norte, Albay, Sorsogon and Catanduanes, PASAGA reported.

Forecasters warned that the storm could bring lashing winds and dump heavy rain in several areas across of the country, including the capital, Manila.

There are fears that Nock-ten could potentially bring flooding to the capital, one of the most densely populated urban centers of the country, during the busy holiday weekend.

PAGASA reports that the typhoon will cause moderate to heavy rainfall in a 500-kilometer (311-mile) radius.

The typhoon warning center projects that the typhoon will gradually weaken "as the system begins to interact with land," but warned it could still retain typhoon intensity.

The governor of the eastern seaboard province of Camarines Sur, Miguel Villafuerte, posted on Twitter that nearly 50,000 family evacuations had been scheduled by 7 p.m. Saturday local time (6 a.m. ET Saturday).

As an added incentive to push people out of their homes and into shelters ahead of Christmas in this Catholic-majority country, Villafuerte has promised to provide the traditional dish of lechon (roasted pig) for his constituents if they proceed to evacuation centers, CNN affiliate ABS-CBN reported.

The Philippines has been battered by devastating typhoons in recent years, most notably Typhoon Haiyan in 2013 -- considered to be among the strongest storms to make landfall. Haiyan killed more than 6,000 people and forced nearly 4 million people from their homes.