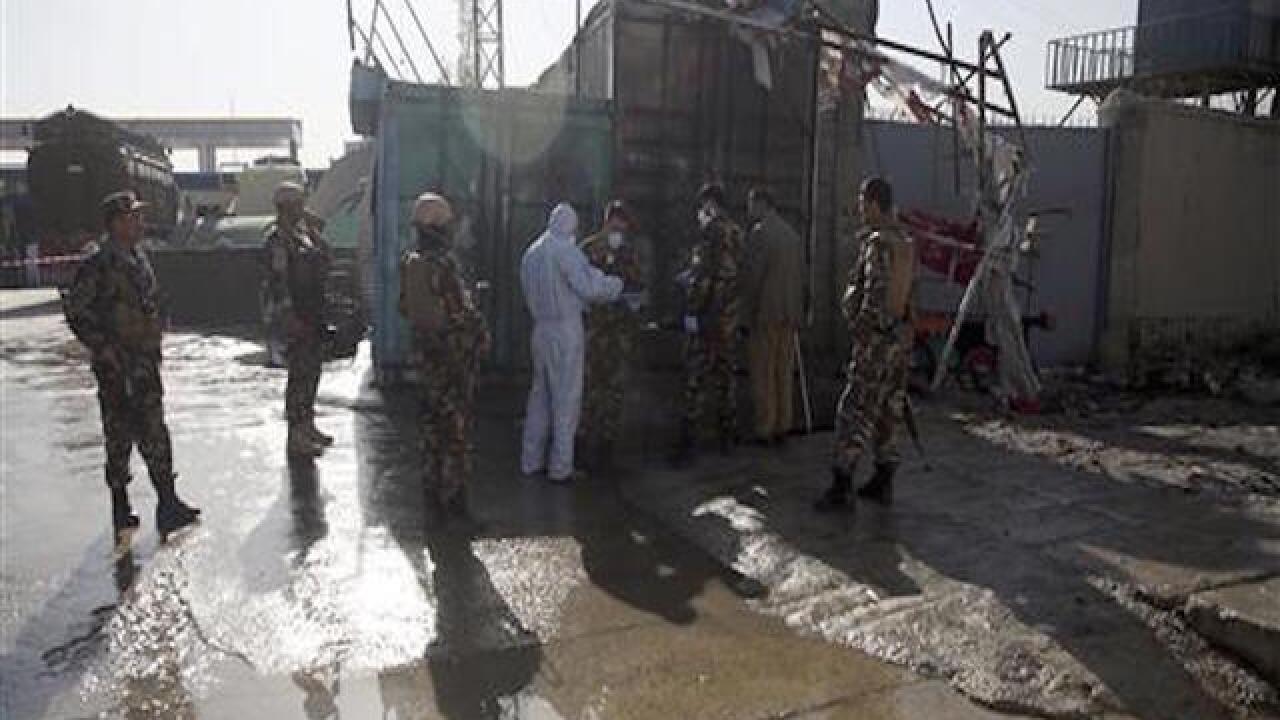 KABUL, Afghanistan (AP) — A Taliban suicide bomber killed 14 Nepalese security guards in an attack Monday on their minibus in the Afghan capital, Kabul, the Interior Ministry and an Afghan security official said.

Elsewhere in Afghanistan, a bomb rigged to a motorbike killed 10 Afghan civilians during morning rush hour in a busy market in a province in the northeast.

And later Monday in Kabul, a second Taliban bombing killed an Afghan civilian and wounded five people, including a provincial council member who was the intended target of that attack, authorities said.

The attack was the latest to hit Kabul as the Taliban have stepped up their assaults as part of their summer offensive. The insurgents frequently target government employees and Afghan security forces across the country.

In the bombing that killed the Nepalese, the bomber was on foot when he struck the minibus, said Gen. Abdul Rahman Rahimi, the city's police chief. He did not identify the foreign security company the guards work for.

The Interior Ministry confirmed that all 14 killed were Nepalese citizens, describing the attack as the work of a "terrorist suicide bomber." It said the explosion also wounded nine people, five Nepalese employees and four Afghan civilians.

Amrit Rokaya Chhetri, a Nepalese guard wounded in the attack, told The Associated Press they were on their way to the Canadian Embassy when the blast took place.

"Many people died," Chhetri said from his hospital bed, his head covered with bandage. "I say to my family, I am ok and I will come home."

Abdullah Abdullah, the country's chief executive officer, condemned the attack in a posting on Twitter, saying: "This attack is an act of terror and intimidation."

Taliban spokesman Zabihullah Mujahid claimed responsibility for the attack in a statement to media.

In Nepal, Bharat Raj Paudyal, spokesman for Nepal's Ministry of Foreign Affairs, said the government is aware of Monday's incident in Kabul and is trying to verify the names of the victims and details about the bombing. Nepal does not have an embassy in Afghanistan but the embassy in Islamabad, Pakistan, is working to get the details, he said.

In a conflicting statement, Afghanistan's Islamic State affiliate also claimed responsibility for the Kabul attack, identifying the suicide bomber as Erfanullah Ahmed and saying he carried out the attack by detonating his explosives' belt. The conflicting claims could not immediately be reconciled.

Insurgents frequently target buses with government employees — or those perceived to be working for the Kabul government. In late May, a suicide bomber struck a minibus carrying court employees during morning rush hour in Kabul, killing 11 people — judges and court employees. The Taliban claimed responsibility for that attack as well.

In the northeastern Badakhshan province, the parked motorbike-bomb that killed at least 10 Afghan civilians on Monday also wounded 40 others, according to Naved Froutan, spokesman for the provincial governor.

The explosion took place in the main bazaar in Kashim district, he said, adding that "an investigation is underway to determine the target of the attack, but all victims of the attack are civilians." He added that women and children were among those killed and wounded of the attack.

Mujahid, the Taliban spokesman, denied any involvement by the insurgents in the blast in Badakhshan, though Taliban are active in the area and regularly target Afghan security forces there.

As for Monday's second blast in Kabul, it went off near the home of Mawlavi Attaullah Faizani, a member of the Kabul provincial council, said Sediq Sediqqi, spokesman for the Afghan interior minister.

Sediqqi said the bomb went off as Faizani was passing by in his vehicle. Mujahid confirmed the Taliban had targeted the provincial council member.

Afghan President Asharf Ghani condemned all three of Monday's attacks, according to a statement from the presidential palace. It quoted Ghani as saying that "terrorists do not hesitate to kill people even during the holy month of Ramadan" and that they are seeking to "create fear among the people."