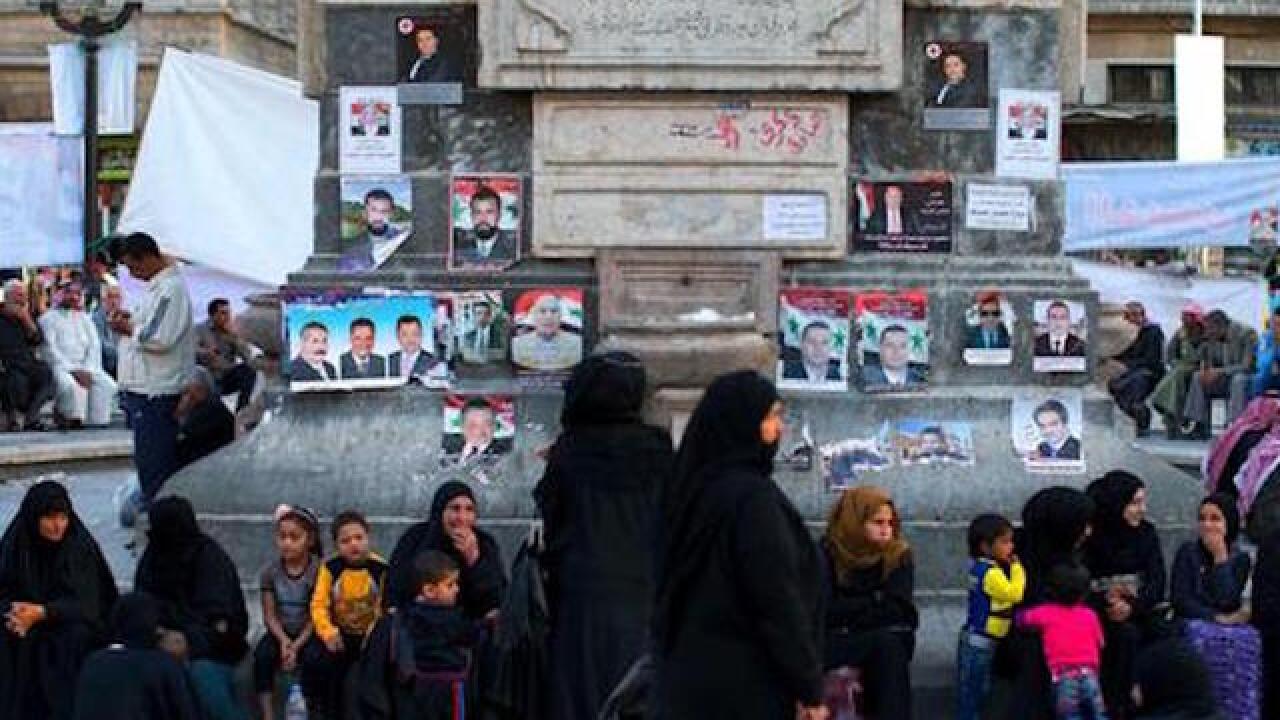 Copyright Associated Press
Hassan Ammar
<p>Syrians sit in front of campaign posters for parliamentary candidates as they gather in the Marjeh square in Damascus , Syria, Monday, April 11, 2016. The vote - expected to be a rubber stamp of President Bashar Assad's loyalists - will only proceed in government-controlled areas as the Damascus authorities are unable to organize any balloting in rebel-controlled areas or the territory under the Islamic State group. (AP Photo/Hassan Ammar)</p>

Al-Manar TV, run by Lebanon's Hezbollah militant group, which is fighting alongside Syrian government forces, reported the offensive to retake Tel al-Ais. The Syrian Observatory for Human Rights, an activist-run monitoring group, said clashes were ongoing around Tel al-Ais and the nearby village of Khan Touman.

Tel al-Ais overlooks a supply line connecting the capital, Damascus, to the northern city of Aleppo, parts of which have been held by groups opposed to the government since 2012.

Insurgents captured Tel al-Ais earlier this month after heavy fighting despite a U.S. and Russian-brokered cease-fire, which excludes the al-Qaida-affiliated Nusra Front.

Elsewhere in Syria, a Russian helicopter crashed near the central city of Homs, killing two pilots.

Russia's Defense Ministry said the Mi-28N helicopter gunship crashed early Tuesday after completing its mission. It said there was no evidence that it came under fire. The bodies of the pilots were recovered and taken to the Hemeimeem air base on Syria's coast, the ministry said.

Russia has been carrying out airstrikes since Sept. 30 in support of Syrian government forces. The air campaign has allowed Russia to test some of its latest weapons, including the Mi-28 helicopter.

Russia has now lost three aircraft in Syria. The others were an Su-24 bomber that was shot down by a Turkish jet in November and a helicopter sent on a rescue mission, which was hit by ground fire.

In northern Syria, Turkish artillery shelled Islamic State targets in the Syrian town of Azaz from across the border after rockets fired from Syria struck a Turkish border town, according to Turkey's state-run Anadolu news agency.

Two rockets landed in the Turkish town of Kilis on Tuesday, wounding at least eight people. At least four other people were wounded in a similar incident on Monday.