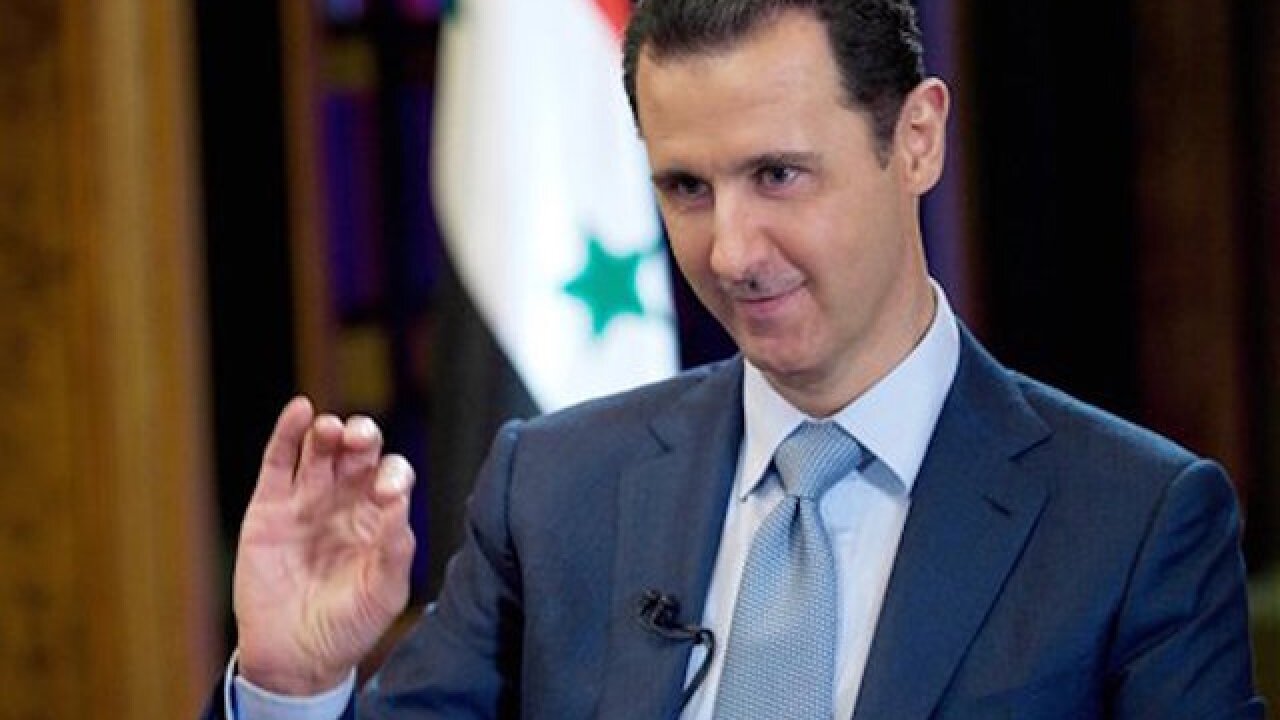 SANA via AP
<p>In this Feb. 10, 2015, file photo released by the Syrian official news agency SANA, Syrian President Bashar Assad gives an interview with the BBC in Damascus, Syria. On Wednesday, March 30, 2016, Assad said in an interview with Sputnik, a Russian state news agency, that Syria needs a national unity government that would secure the transition to a new constitution, rejecting the "transitional body" demanded by the opposition, which wants him to step down. (SANA via AP, File)</p>

BEIRUT (AP) — Airstrikes hit near a school and a hospital east of the Syrian capital of Damascus on Wednesday, killing at least 23 people in one of the deadliest incidents involving civilians since a partial cease-fire came into effect in the war-torn country more than a month ago, pro-opposition activists said Thursday.

British Foreign Minister Philip Hammond, meanwhile, scoffed at Syrian President Bashar Assad's remarks offering a national unity government with some members of the opposition. Instead, Britain's top diplomat said a transitional government with full powers was the only way forward in Syria.

The Britain-based Syrian Observatory for Human Rights said Thursday's casualties near the capital were caused by a series of airstrikes that struck the rebel-held town of Deir al-Asafir, which lies east of Damascus in an area known as Eastern Ghouta. Four children and a civil defense worker were among the victims, the Observatory said. The Local Coordination Committees, another opposition activist group, put the death toll from the airstrikes at 17.

The civil defense, also known in opposition-held parts of Syria as the White Helmets, confirmed that one of their volunteers, Mohammad Ghourani, died while carrying out his duty.

It was not immediately clear who was behind the airstrikes.

The government says al-Qaida's branch in Syria, the Nusra Front, operates in the eastern suburbs of Damascus. The militant group and its rival, the Islamic State group, are both excluded from a cease-fire that has been in place in Syria for a month.

The Syrian opposition says the government of President Bashar Assad has been targeting civilians despite the truce.

The Syrian National Coalition, an opposition group, denounced the "massacre" in Deir al-Asafir, saying it threatened to derail the cease-fire and peace talks that are scheduled to resume in Geneva in two weeks.

"This crime is the latest in a series of actions that aim to consecrate ongoing violations of the cease-fire," the SNC said in a statement.

The Observatory says around 2,700 families live in Deir al-Asafir. Government troops have been trying to encircle the town for weeks. There was no immediate reaction from the Syrian government, which rarely comments on security issues.

The talks in Geneva are meant to start a political process for transition in Syria away from Assad. In comments made in an interview with Russia's state news agency Sputnik, however, Assad rejected a key opposition demand for a transitional ruling body with full powers, which major powers agreed on at a Geneva conference in June 2012. He proposed instead a national unity government that comprises government loyalists and members of the opposition.

Assad also said he is ready to hold a snap presidential election if the people call for it. But the proposal was quickly shot down by the opposition, which said sharing power with Assad is absolutely out of the question.

Hammond, on a visit to Beirut Thursday, said Assad's offer was not enough.

"Bashar Assad talks about a unity government, by which he means bringing one or two hand-picked regime friendly oppositionists into minor posts in the government. That is not sufficient," Hammond told reporters. "There has to be change of direction in Syria ... and it has to be a government that is not, or at least in the future will not be led by Bashar Assad."

Syria's prime minister, meanwhile, said the country's economy is being subjected to a "fierce war," adding that his government is working to stop the fall of local currency.

Wael al-Halqi's comments on Thursday came as the Syrian pound crashed against foreign currencies — plunging to its lowest level in five years, 530 pounds to the U.S. dollar. Al-Halqi, who spoke during a parliamentary session, did now say what the government will do.

When Syria's conflict began in March 2011, the exchange rate was 47 pounds to the dollar. Earlier this week, state media reported that several people were detained with large amounts of cash while dealing on the black market.

The Syrian pound's latest crash began when Russia announced the withdrawal of the bulk of its forces from Syria.

Also Thursday, the Russian defense ministry said Russian demining experts have arrived in Syria to start clearing mines in the ancient town of Palmyra, recaptured on Sunday by Syrian troops under the cover of Russian airstrikes.

The taking back of Palmyra was an important victory over Islamic State extremists who operated a 10-month reign of terror there. Russia had pledged to help the Syrian government with clearing the archaeological sites of mines, and the Russian ministry said in a statement that the first demining group landed early Thursday at Russia's base in Syria.

It was not immediately clear when the Russians would get to Palmyra. The demining is expected to take several months.