Suicide bomber kills more than a dozen in Iraq 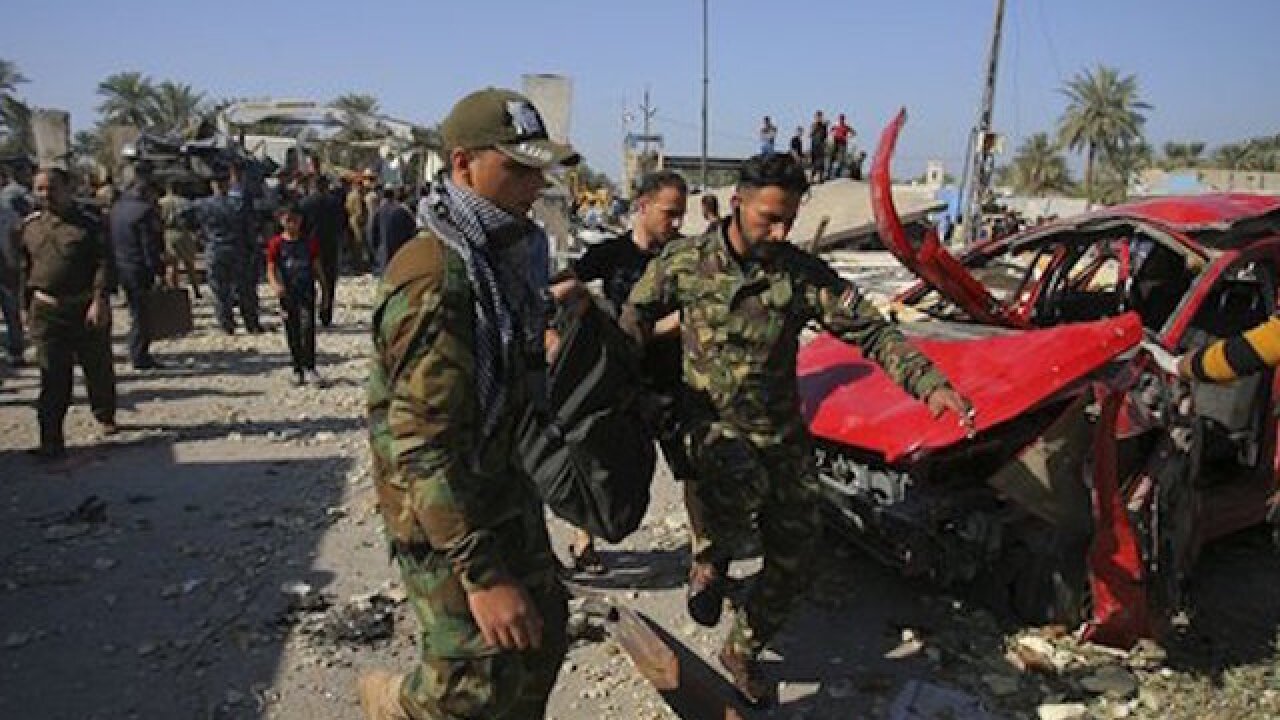 Copyright Associated Press
Anmar Khalil
<p>Iraqi security forces evacuate a body of a victim killed from a suicide bomb attack in Hillah, about 60 miles (95 kilometers) south of Baghdad, Iraq, Sunday, March 6, 2016. The suicide bomber on Sunday rammed his explosives-laden fuel truck into a security checkpoint south of Baghdad, killing and wounding dozens, officials said, the latest episode in an uptick in violence in the war-ravaged country. (AP Photo/Anmar Khalil)</p>

The deadliest attack took place in the southern province of Dhi Qar when a suicide bomber blew himself up inside a restaurant that is frequented by Shiite paramilitary militia fighters, killing at least 14 people.

Another 27 people were wounded in the attack that targeted a famous restaurant on the main highway that links Baghdad with the southern provinces, a police officer said.

Dhi Qar is located about 200 miles (320 kilometers) southeast of the capital.

At around the same time, a suicide car bomber set off his explosives-laden car in a commercial area in the oil-rich city of Basra, killing at least five people and wounding 10 others, another police officer said.

Pieces of flesh and debris littered the bloodstained pavement as thick black smoke billowed from the area. The attack also damaged up to 30 cars.

Basra is located about 340 miles (550 kilometers) southeast of Baghdad.

Earlier in the day, a suicide bomber rammed his car into a security checkpoint in Baghdad's northeastern suburb of Sadr al-Qanat, killing six troops and wounding 13 others.

Another suicide car bomber hit a headquarters of paramilitary troops in the town of Mishahda, 20 miles (30 kilometers) north of Baghdad, killing four troops and wounding 10 others.

Medical officials confirmed the causality figures. All officials spoke on condition of anonymity as they were not authorized to release information.

The Islamic State group seized much of northern and western in Iraq in the summer of 2014 and established a self-styled Islamic caliphate in the areas of Iraq and Syria under its control, imposing a violent version of Islamic law.

Iraqi forces backed by a U.S.-led coalition have advanced against IS on a number of fronts in recent months. But the extremists have meanwhile carried out a number of large-scale bombings targeting civilians in Baghdad and elsewhere.

According to the United Nations figures, at least 1,119 Iraqis were killed and 1,561 were wounded in March, a sharp increase from the previous month that stood at 670 killed and 1,290 wounded. The figures include 575 civilians killed and another 1,196 wounded. The other casualties were Iraqi security forces, including Kurdish forces known as the peshmerga and government-allied militiamen.