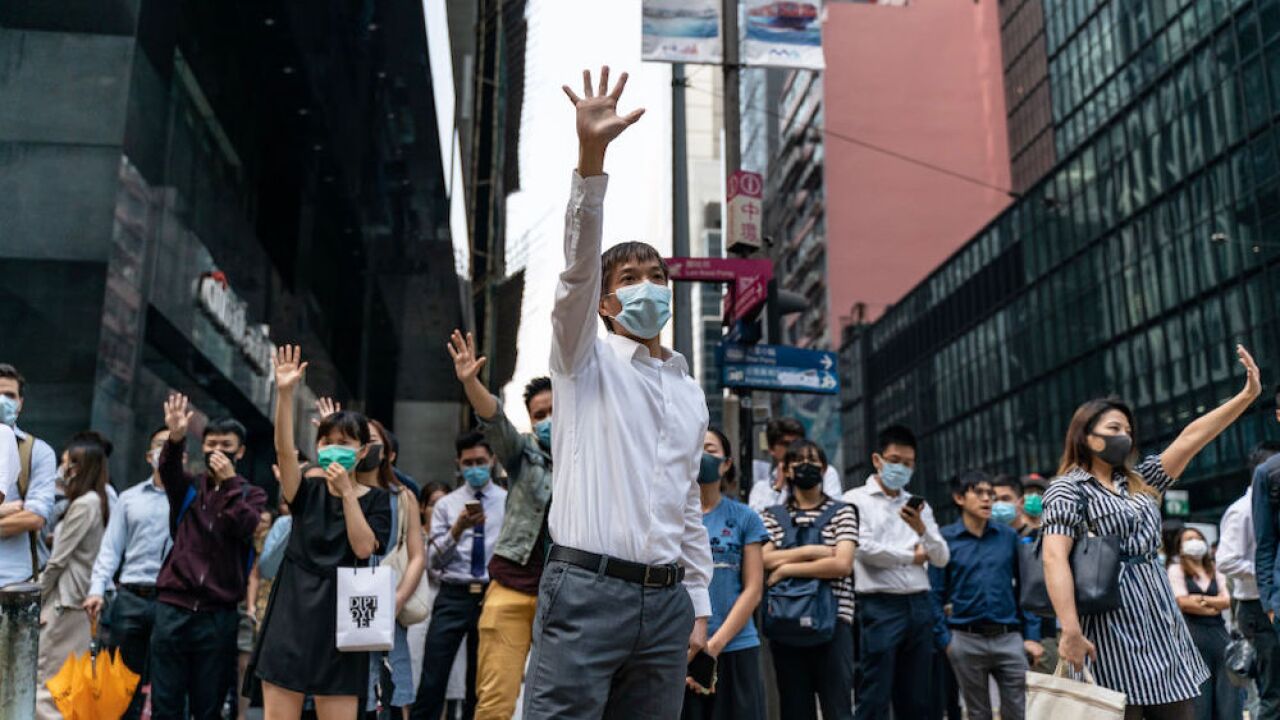 The threat of violence hung over Hong Kong Thursday evening as thousands of student protesters prepared to face off with riot police, amid a continued occupation of several of the city's most prestigious universities.

The level of unrest and destruction in the almost six-month-long protest movement has reached new and unnerving heights in recent days, with several people critically injured and Chinese state media warning radical protesters, "You are on the edge of doom."

Sporadic clashes broke out Thursday morning, as police fired tear gas at protesters near the Hong Kong Polytechnic University in Kowloon. While on Hong Kong Island, roads surrounding the University of Hong Kong were blocked by protesters, resulting in traffic delays.

Universities have emerged as a new focal point of the protest movement, with numerous campuses across the city becoming home to heavily fortified temporary protest camps.

At the Chinese University of Hong Kong (CUHK) in the New Territories, several thousand protesters have effectively barricaded themselves inside the grounds, blocking all entrances for the third straight day.

The CUHK campus was on Tuesday the scene of some of the most intense fighting in the city since demonstrations began in June, with hundreds of riot police firing more than 1,567 canisters of tear gas during a chaotic and ultimately aborted clearance operation.

Throughout Wednesday and Thursday, protesters and those helping them continued to pour into the sprawling grounds by road and by foot, bringing supplies, including protective gear, food and water.

A highly organized operation was launched inside the campus, sorting and distributing the supplies, building and reinforcing barricades, and stockpiling weapons, including petrol bombs, bows and arrows, javelins, and pieces of wood hammered with nails.

So far police have appeared reticent to return to the university despite a Hong Kong court rejecting an application by students to block police from entering the campus without a warrant.

Many overseas students studying at the university have been asked to leave by their home colleges and CUHK administrators announced the early cancellation of classes, stopping the fall semester around two weeks early. On Wednesday, police said they had evacuated several students from mainland China via police boat, because the roads were blocked by protesters.

The effects of the campus unrest could be felt across the city Thursday, with continued travel disruptions and protesters, including large numbers of office workers on their lunch break, taking over the busy streets in Central district for a fourth straight day. Office workers also came out in support of the student protesters in Tai Koo, in the east of the city.

Two of the three tunnels connecting Hong Kong Island with the Kowloon peninsula, including the busiest Cross-Harbour Tunnel, were closed to traffic Thursday morning and the MTR continued to suspend service at several stations.

All schools have suspended classes for the rest of the week -- the first such instance since protests began.

The protests this week have taken a dark turn, with more people critically injured than at any point in the long-running movement.

Hong Kong's Hospital Authority said 67 people were treated in hospitals in total on Wednesday with injuries related to the protests.

On Wednesday, a 70-year-old man was hospitalized and remains in critical condition after being hit on the head by a brick thrown by a protester, police said.

The injured man was on a lunch break from his job as a cleaner when he voluntarily began clearing bricks from the road with other members of the public, according to police. Video of the alleged incident shows protesters and government supporters hurling bricks at one another before a man falls to the ground.

A 15-year-old boy was struck in the head by what is believed to be a tear gas canister and is also in critical condition, according to Hong Kong's Hospital Authority.

Earlier in the week, a protester was shot by police and a man was set on fire following a dispute with protesters Monday.

'You are on the edge of doom'

The major escalation in political unrest this week has once again raised questions over what will happen next. Looming over those conversations is the specter of a possible Chinese intervention.

"We have had enough talking, persuasion and warnings. To stop the unrest has to be implemented and advanced more resolutely now. The country will never accept the situation to be out of control, justice to be covered or Hong Kong to be sunk," the editorial from CCTV read.

It echoed an editorial in the state-run tabloid Global Times suggesting the People's Armed Police and the People's Liberation Army were ready to back up Hong Kong's government "when necessary."

"We also warn the radical protesters: You are on the edge of doom. Those who are coerced to be 'valiant' should walk away as soon as possible when you still can make the call," the editorial said.

However, it is not clear if Beijing has a red line, and what it would take for protesters to cross it before provoking a Chinese military response.

Analysts say it is still a question that Beijing is actively considering.

"It's smart not to state a clear red line because you are going to have to act on it to keep your credibility once that line has been breached. And there is every likelihood that protesters would actively seek to breach that line," Adam Ni, a China researcher at Macquarie University in Sydney told CNN last month.

The Chinese government has hinted that it might be looking at new ways of resolving the crisis in Hong Kong, both short-term and long-term.

After a meeting of a top Chinese Communist Party body in October, senior Chinese official Shen Chunyao said that Beijing would work to improve the legal system and strengthen "law enforcement" in Hong Kong, and neighboring Macao.

He added it was time to introduce new lessons in "patriotism" across Hong Kong, a move which has been discussed by the Chinese government for a long time.

On Tuesday, the Chinese government unveiled a new range of patriotic education measures for the country, which according to state-run Xinhua would "focus on young Chinese."

"Patriotism should be embedded in the whole process of school education," the article said.

Buried in point 20 of the new patriotic education outline is a call to "guide" the citizens of Hong Kong and Macao to "enhance their national identity and consciously safeguard national unity."