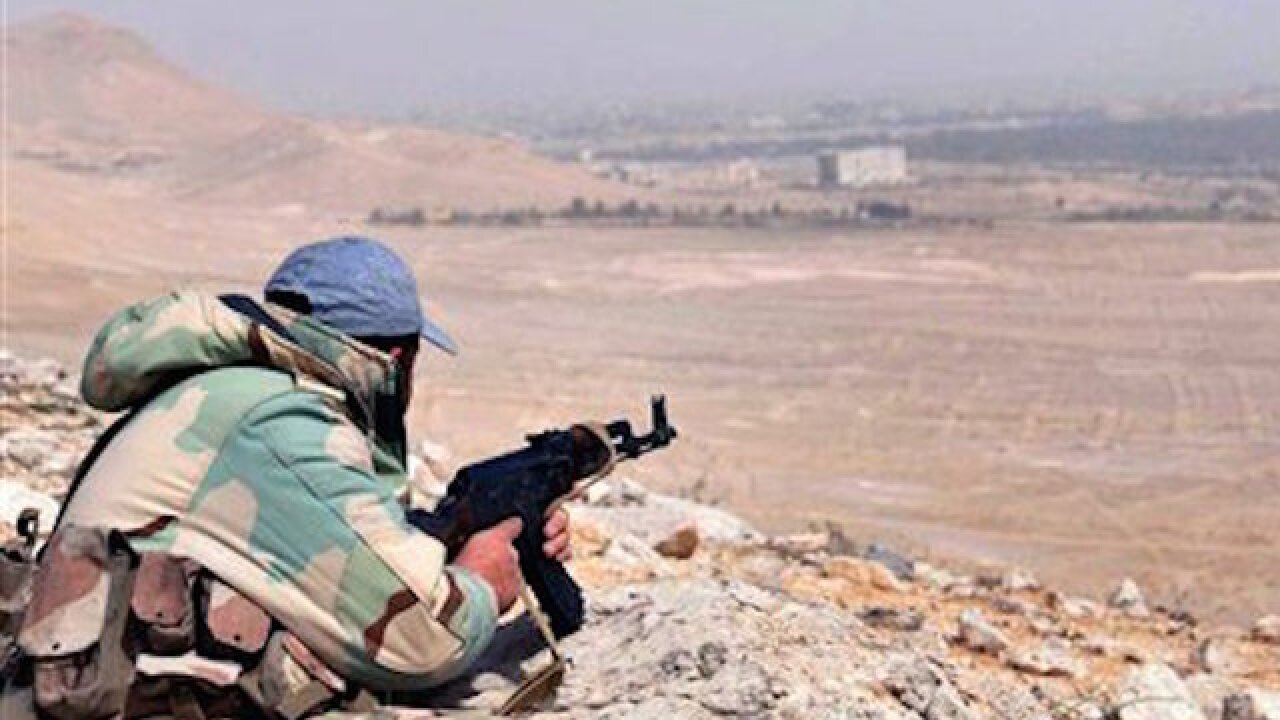 Uncredited
<p>In this photo released on Thursday, March 24, 2016, by the Syrian official news agency SANA, a Syrian government soldier takes his position on hill at the entrance of Palmyra, central Syria. Syrian government forces recaptured a Mamluk-era citadel in Palmyra from the extremist Islamic State group on Friday, Syrian state media and monitoring groups said, as the fierce battle for control of the historic town entered its third day. (SANA via AP)</p>

BEIRUT (AP) — A senior Egyptian al-Qaida figure fighting in Syria was killed in a U.S. drone strike this week, the latest to be killed in such attacks in Syria, a Syrian opposition monitoring group and relatives said Friday.

The Britain-based Syrian Observatory for Human Rights said Rifai Ahmad Taha was killed in a strike Tuesday in the northwestern Idlib province.

Before joining al-Qaida, Taha was a top figure in Egypt's notorious militant group Gamaa Islamiya, which massacred 58 foreign tourists in the ancient Egyptian city of Luxor in 1997. He was also allied with Osama bin Laden in Afghanistan.

The Observatory's chief Rami Abdurrahman said several al-Qaida members, including Taha, were killed in Tuesday's strike. He said one of the dead was identified as Abu Omar al-Masri — which is Arabic for Abu Omar the Egyptian — but that it was not clear if Taha was using that name. Taha was believed to be in his 60s.

In Egypt, a relative said that Taha's wife and brother have received confirmation about his death. The relative spoke on condition of anonymity fearing reprisals.

"I can confirm that the US struck a vehicle killing several AQ militants," said Allen, using an acronym to refer to al-Qaida. "The results of this strike are still being assessed."

On Wednesday, Syria's al-Qaida branch known as the Nusra Front confirmed the death of Abu Firas al-Souri, a senior figure in the group, in a U.S. airstrike that also took place in Idlib province. Al-Souri was killed on Sunday, the group said.

Taha's relative said dozens of members of Islamic groups were paying condolences Friday to the family at the home of his brother, Gharib, in the southern Egyptian village of Nagaa Dunqal. According to the relative, Taha had told his family he believes he is being followed and just three days before his death he called his brother from Syria to tell him that the Americans are monitoring his movements.

Taha was jailed in 2001 in Egypt under the rule of then-President Hosni Mubarak after being detained in Syria and handed over to Cairo. He was released after the long-serving leader was removed from power in 2011.

Before that he spent nearly three decades outside Egypt, including stints in Afghanistan and Sudan where bin Laden lived, and was also in Pakistan.

Taha was also involved in plotting the assassination attempt against Mubarak during a visit to Ethiopia in 1995. The former Egyptian president was not harmed when his convoy was hit with bullets.

In the early 1980s Taha, spent five years in jail after the 1981 assassination of Egyptian President Anwar Sadat by Muslim extremists.

In other developments, Syrian government forces fought fierce battles Friday against militants near the city of Aleppo, the country's largest and once commercial center, the Observatory and the Local Coordination Committees said.

Meanwhile, the fate of dozens of cement workers and contractors abducted from their workplace northeast of Damascus on Thursday by the Islamic State group remained unknown.

There were conflicting reports.

The Observatory said around 170 workers were expected to be released after successful mediation with elders from Dumeir, the area northeast of Damascus from where they were kidnapped. The activist group said some of the other employees, including guards and armed government loyalists, would not be released.

In Lebanon, media belonging to the Hezbollah group, which is fighting alongside Syrian President Bashar Assad's troops, said most of the 260 employees who were at the factory have been released already. It added that six workers were slain in front of their colleagues during interrogation, while 30 others remain unaccounted for.