Woman accused of scamming churches out of $200,000

A Buffalo woman is accused of stealing more than $200,000 from local churches and nonproft organizations through phony grant writing services.

By: WKBW Staff
Posted at 2:14 PM, Mar 15, 2018
A Buffalo woman is accused of stealing more than $200,000 from local churches and nonproft organizations through phony grant writing services.
New York Attorney General Eric Schneiderman was in Buffalo on Thursday to announce criminal charges against Christina Sanford Gordon. Schneiderman says Gordon misrepresented herself as a successful fundraiser and grant writing expert and took money from the churches and organizations in exchange for services she did not provide.
The Attorney General's Office says Gordon is a seasoned scam artist who developed an intricate scheme for defrauding the churches and organizations.
Schneiderman says Gordon used a free state web portal called the Grants Gateway to represent herself as an expert fundraiser with years of experience using the web tool. She even created a fictitious person named "Sylvia Gregory" who she claimed also worked for Grants Gateway and was someone with whom she had a close working relationship.
Schneiderman's office says Gordon used the fictitious "Gregory" to gain the trust of her victims, even sending them emails as "Gregory" to congratulate them on being awarded a grant that they did not actually receive. Schneiderman says Gordon even created fake letters from the Attorney General's Office congratulating them on their award. 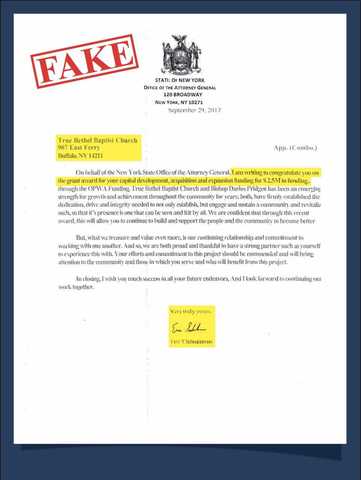 The victim organizations not only paid Gordon for her fundraising services, they also began capital projects under the belief they had secured state funding for those projects.
In one instance, Elim Christian Fellowship Church (“Elim”) paid Gordon more than $16,000 for fundraising services. Gordon allegedly claimed that she had applied for, and secured grants totaling $900,000 for Elim through Grants Gateway, for projects such as paving the church parking lot, installing fencing, and purchasing new media equipment. As a result, Elim undertook several capital projects to improve its church and campus, which totaled more than $345,000. Elim later learned that Gordon had, in fact, never applied for any grants and the church had never been awarded any funds for the capital projects. Elim now owes contractors over $345,000 for projects that it never would have undertaken if not deceived by Gordon. Additionally, two of the contractors have put liens on Elim’s church property.
Similarly, Reverend Elzie Fisher of Good Shepherd Temple Church (“Good Shepherd”) paid Gordon $4,575 from his personal funds to apply for and obtain grants to make capital improvements to his church, including fixing the roof and removing asbestos. Because Gordon allegedly falsely notified the church that it had received a $500,000 grant, Good Shepherd allowed a roofing company to begin replacing the church roof. The company tore off half of the roof and replaced it with plywood sheathing. The roofing company then ceased construction because it had not received any payment. Currently, half of the church roof has no shingling on it and is susceptible to weather-related damage. The church does not have the funds to complete the project, which it estimates will take at a minimum of $43,000 to complete.
Additionally, Gordon allegedly told True Bethel Baptist Church’s True Community Development Corporation that she could obtain grants through Grants Gateway. True Community Development Corporation paid a total of $5,900 to Gordon. Gordon then allegedly provided the Executive Director with two fraudulent letters purportedly from Attorney General Schneiderman, congratulating them on receiving two state grants for capital development projects: one in August 2017 for $3.2 million, and one in September 2017 for $2.5 million.
The Attorney General’s investigation further revealed that Gordon’s scheme allegedly followed a similar pattern at several other organizations, including Greater Works Christian Fellowship Church, Mount Moriah Missionary Baptist Church, 716ers Elite AAU Basketball, Buffalo Black Achievers, and the Nidus Development. Gordon allegedly spent tens of thousands of dollars that she bilked from victims on a lavish lifestyle that included high-end clothing, jewelry, furs, cruises, and more.
The Attorney General’s office found that Gordon never actually applied for or obtained any grants. Instead, she allegedly spent the money the community groups paid her for supposed grant writing services on lavish personal expenses, including beauty treatments, cruises, jewelry, and apparel. 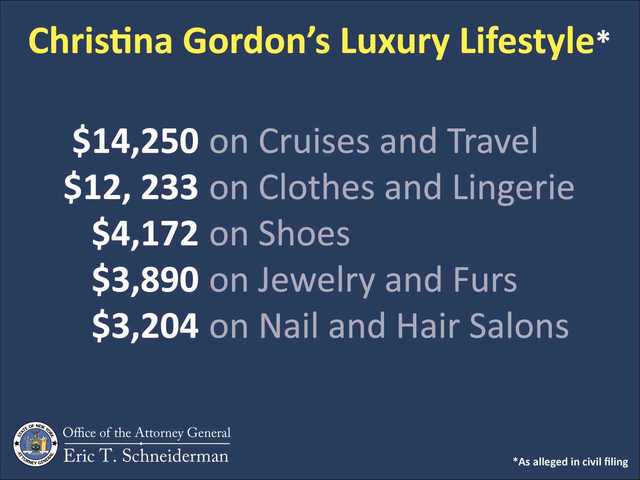 Gordon’s criminal history dates back to 1989 and spans nearly her entire adult life; in fact, Gordon allegedly began ripping off churches and nonprofits in Buffalo just two months after being released from federal prison in January 2017 on prior, unrelated charges.
The Attorney General's office is suing Gordon to get full restitution for the victimized organizations. Gordon is also charged with seven felony counts, including one count of Grand Larceny in the Second Degree, one count of Scheme to Defraud in the First Degree, and five counts of Criminal Possession of a Forged Instrument in the Second Degree. Gordon, a repeat felon, could face significant prison time.
State grants are often the lifeblood of organizations whose mission is to help others,” said Attorney General Schneiderman. “As we allege, Gordon’s far-reaching scheme defrauded dozens of Buffalo churches and non-profits, preying on their funding needs by lying, stealing their money, and stringing them along – often with disastrous results for the organizations. We’ve filed criminal charges and a civil suit in order to get these organizations the restitution they deserve. New Yorkers who believe they have been similarly defrauded should contact our office right away.”
New Yorkers who believe Gordon has defrauded them are encouraged to file a complaint online or call the Attorney General’s Buffalo Regional office at (716) 853-8404.
Attorney General Schneiderman urges charitable organizations seeking to hire a fundraiser to double check their references and remember the old adage: “If it sounds too good to be true, it probably is.” Be wary of any offers or deals that sound too good to be true, as they likely are too good to be true.