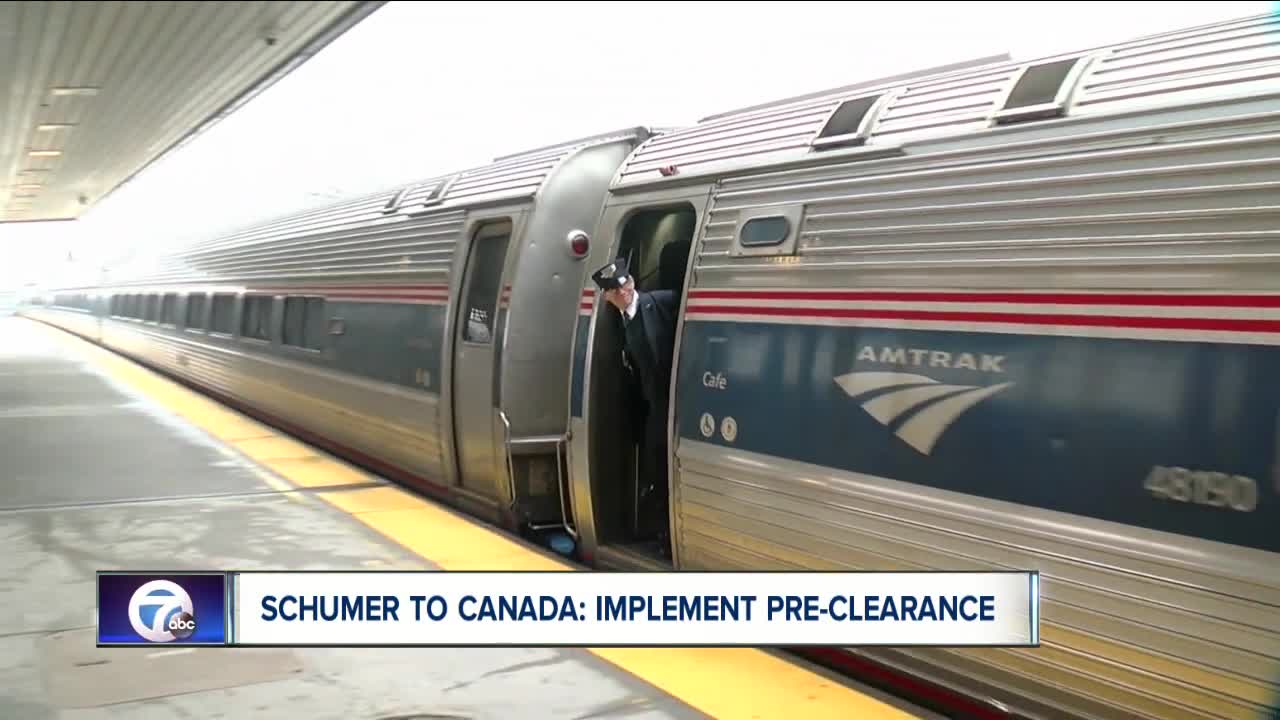 Schumer to Canada: Implement the agreed upon pre-clearance process at Niagara Falls

The United States and Canada agreed in 2019 to put into practice procedures to help the trains get across the border quicker. The goal was to create a commuter train service between Western NY and Toronto.

While the Niagara Falls International Railway Station, opened in 2016, was designed with state-of-the-art technology to speed screening, Schumer said the Canadians are still using an open-air, uncovered location that is time consuming and "unpleasant" for travelers

"It makes many people, whether they are on the American or Canadian side, not want to take the trip," said Schumer.

The U.S. Senator feels the situation is hurting the entire region economically as it makes easy train travel into Southern Ontario, which is going through a period of rapid growth, challenging for passengers.

Under the agreed upon plan, Canadian Border agents would use the Niagara Falls, NY train station to perform their checks. The Amtrak train would not need to make another stop when crossing into Canada.

A copy of Schumer’s letter to the Canadian government appears below.

I write on behalf of the new, state-of-the-art train station in Niagara Falls, New York. It has been my privilege over the last decade to secure funding for this new station and help see this project through from the groundbreaking to the ribbon-cutting. This station was designed to accommodate pre-clearance for passengers entering both the United States and Canada. However, despite the available infrastructure and a willingness on the part of local officials and United States Customs and Border Protection (CBP), pre-clearance is still not available for rail passengers entering Canada.

On the heels of the completion of renovations at the Whirlpool Bridge, the time could not be better for Canadian customs officials to undertake pre-clearance at the Niagara Falls Train Station on the American side. The pre-clearance expansion agreement that was agreed to by our two countries last summer is a good first step in easing the burden of crossing the border while still maintaining the integrity of all necessary safety protocols. The ability to pass through customs before they board the train and enter Canada would be a remarkable convenience for anyone seeking to travel between our two countries by rail. Instead, passengers must board a train in Niagara Falls, New York, then disembark in a less secure space in Ontario for a customs check, before re-boarding the train and continuing on. This cumbersome process can be avoided, all while affording the Canadian customs officials the luxury and convenience of a brand new, pre-clearance-ready space that meets all modern IT and spatial requirements.

Establishing a pre-clearance partnership is the first step in increasing passenger traffic at the Niagara Falls Train Station and establishing an even more robust link between Western New York and Southern Ontario via commuter rail. I greatly encourage the Canadian government to take this first step, and am willing to help in any way possible.

Please feel free to contact me or a member of my staff if you have any questions or if I can be of further assistance.