Buffalo Common Council to decide if zoning should be changed to start construction
Posted: 7:00 PM, Jan 09, 2020 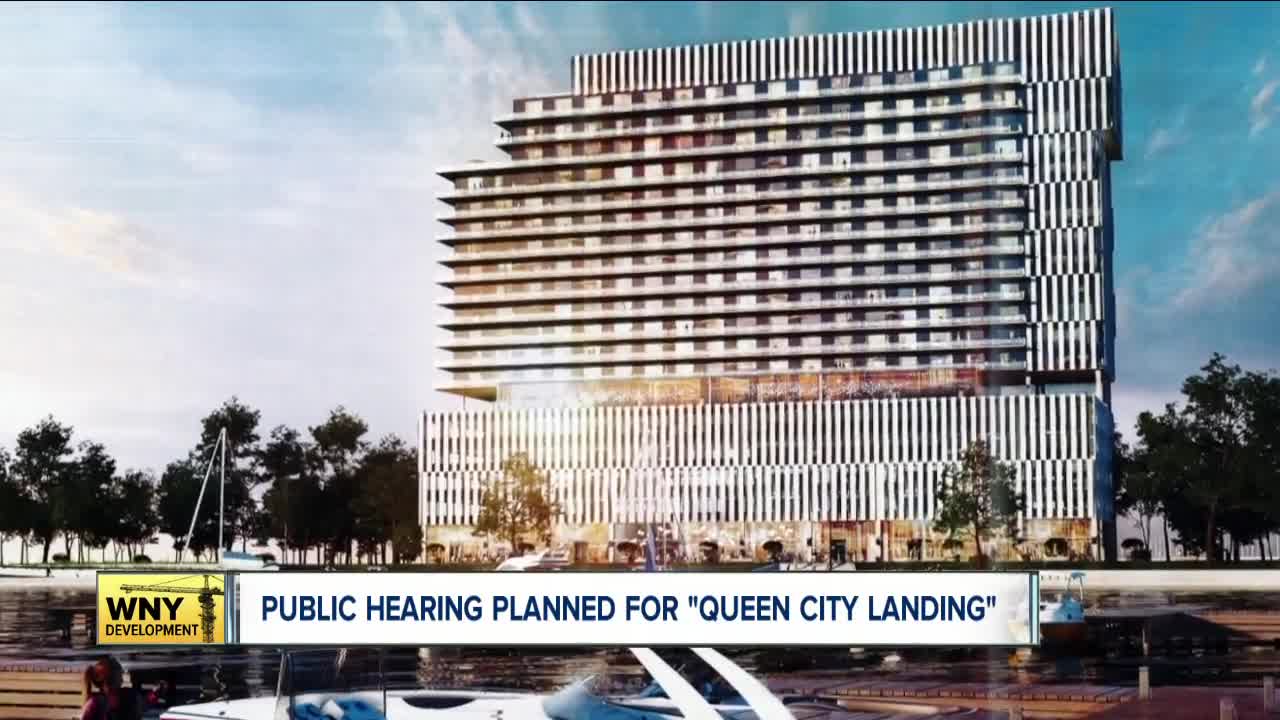 BUFFALO, N.Y. (WKBW) — In 2016, Gerry Buchheit submitted a plan to redevelop the former Freezer Queen site on Buffalo's Outer Harbor (Fuhrmann Boulevard) into a mixed-use structure with a detached garage.

Buchheit owned the property and called his project "Queen City Landing" (QCL). It was to include a mixture of commercial, retail and residential space.

While the idea was finding favor with the City of Buffalo, it was not popular with everyone. "We get emails and calls about in our office, absolutely," said South District Buffalo Common Councilmember Christopher Scanlon.

Opponents argue that a proper environmental impact study is not being conducted. "One car every 10.4 seconds crossing the public pedestrian and bike path," said Arthur Giacalone, an environmental attorney. Giacalone explained his estimate is based on information from Queen City Landing's consultant.

Height is another concern.

When the project was first proposed in 2016, the 23-story height was acceptable under the city's code. Since then, the Buffalo Green Code was implemented which prevents towers on the waterfront and limits buildings to only 6-stories/90 feet tall, explained Arthur Giacalone.

Queen City Landing LLC has filed a modified plan that would see the structure reduced to 20-floors and not have a detached parking garage.

To work around the Green Code height restrictions and permit a 20-story structure, an effort is now underway to have QCL considered a Public Unit Development (PUD) - something that needs Buffalo Common Council approval, in order to waive or modify the Green Code requirements for the site.

"If you can get an incredible view from a 6-story building, why do you need a 20-story building - other than your financial greed," added Giacalone.

In filings with the Buffalo Planning Board, sponsors of Queen City Landing say it has also been redesigned to be more environmentally friendly.

Giacalone is not buying it. The attorney said the modified plans increase the size of the surface parking lot and expand the footprint of the structure.

"I think on the outer harbor, we do need to do some sort of development to attract people out there. What that is, I am not quite sure what it is going to look like," said Councilmember Christopher Scanlon. Scanlon is still undecided whether he will support the project going forward in its current configuration.

The public is being asked to give feedback on waiving the Green Code requirements for Queen City Landing (QCL) and having it designated as a Public Unit Development (PUD). The public hearing will take place in the Buffalo Common Council Chambers on Tuesday January 14th at 1 p.m. Comments will help determine whether the matter will be referred to the full Common Council for a vote on January 21, 2020.

According to documents filed with the City of Buffalo, Queen City Landing is supposed to have restaurants, banquet areas, commercial space, and 206 apartments with 98 having waterfront balconies. There will also be a mechanical penthouse with common areas for residential tenants.

Revised plans also call for a waterfront terrace, bike and walking paths to the waterfront, passive recreational areas, docks for public use and public waterfront access.