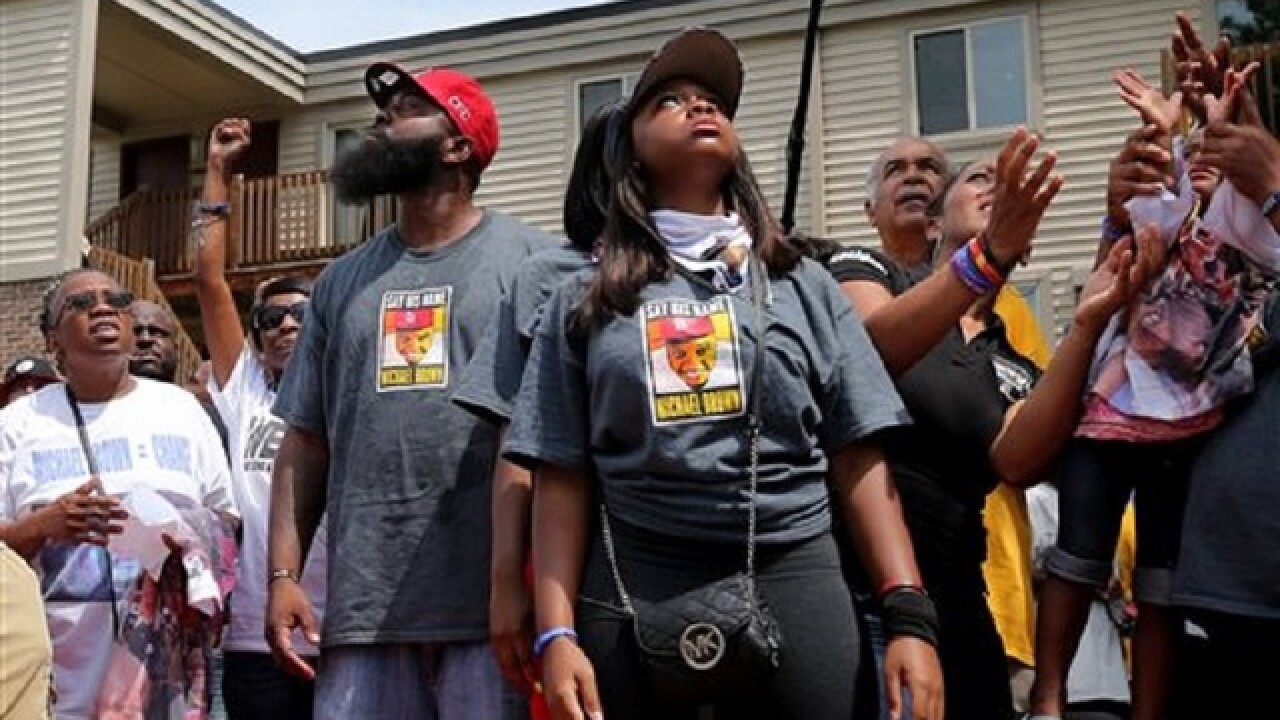 FERGUSON, Mo. (AP) — Gunshots rang out but apparently hit no one after a car struck a protester during a peaceful demonstration in Ferguson, Missouri, on the second anniversary of Michael Brown's death.

Witnesses told The Associated Press that a car drove through a group of protesters who were blocking a street during the demonstration Tuesday night to mark two years since the unarmed black 18-year-old's fatal shooting by a white police officer. They said the car struck a young man so hard that he flew into the air.

"A lady came down and hit a protester — knocked the shoes off his feet," said Sharon Cowan, who was at the scene. "Hit him, and he rolled and he bounced."

Graphic video provided to AP by Heather De Mian, who was at the scene and frequently livestreams protests in the St. Louis area, appeared to corroborate the witnesses' account, showing a man hit and thrown several feet as bystanders shriek.

The man seemed badly injured and was put into a private car to be taken to a hospital, Cowan said.

Shots can be heard on the video less than a minute after the collision. Some witnesses said protesters were firing at the vehicle, which a city spokesman later said was pockmarked with bullet holes.

Small said no one inside the vehicle was injured.

By around 10 p.m., the protesters had disbanded. No arrests were made.

Earlier in the day, a few hundred people gathered for a memorial service and moment of silence along Canfield Drive at the spot where Brown was fatally shot by officer Darren Wilson after a confrontation on Aug. 9, 2014.

A state grand jury declined to press charges against Wilson, and the U.S. Justice Department later cleared him, concluding that he had acted in self-defense. He resigned in November 2014.

Brown's death led to months of sometimes-violent protests in Ferguson. It was also was a catalyst for the Black Lives Matter movement, which rebukes police treatment of minorities and has grown following several other killings of black men and boys by police, such as Tamir Rice in Cleveland and Philando Castile in Minnesota.

The 2014 shooting also led to a Justice Department investigation that found patterns of racial bias in Ferguson's police and municipal court system. The federal agency and the city agreed this year to make sweeping changes.

Brown's father, also named Michael Brown, said in a brief speech during the memorial service that the anniversary was a sad day for him and his family, and for the world, too.