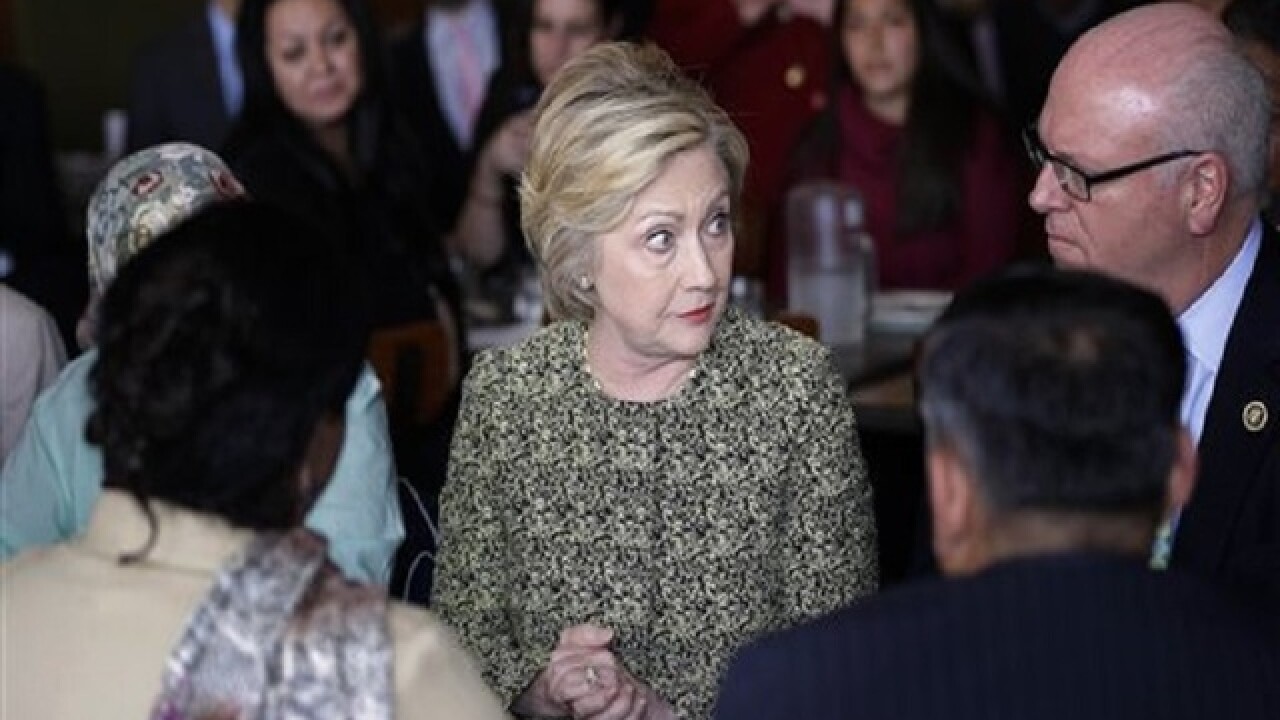 NEW YORK (AP) — Tensions frayed in both parties Monday as Hillary Clinton and Donald Trump tried to stave off the prospect of a lengthy battle to the nomination with big victories in New York.
While Clinton escalated her attacks against rival Bernie Sanders, Republican leader Donald Trump complained about a "rigged" nomination process, prompting a fierce defense from party leaders. Both candidates hope sizable delegate gains in next week's New York primary create a sense of inevitability around their candidacies.
Campaigning in southern California, Texas Sen. Ted Cruz described Trump's attacks on the Republican nomination process as "whining."
"Donald has been yelling and screaming. A lot of whining. I'm sure some cursing. And some late-night fevered tweeting," Cruz told hundreds of supporters gathered in Irvine, Calif.
He noted Trump's complaints follow his struggles in recent primary contests in Utah, North Dakota, Wisconsin and Colorado.
Trump has seized upon his delegate woes in recent days as evidence that "the fix" was in. He angrily denounced the allocation of Colorado delegates to Cruz as "dirty and disgusting" during a Monday night rally in Albany, New York.
Trump compared his loss there to situation in Louisiana, where he won the primary but lost the delegate count to Cruz, "who got his ass kicked." Trump said a similar game was playing out on the Democratic side, where "Bernie Sanders wins and wins and wins" but yet "can't win the race."
"The system is rigged, folks," said Trump, who spoke to more than 10,000 people in an Albany arena during a rally that was interrupted several times by protesters.
Trump's accusations come as he seeks to outmaneuver Cruz in local state gatherings where the delegates who will attend the summer convention are being chosen. In state after state, Cruz's campaign has implemented a more strategic approach to picking up delegates, which, despite Trump's current lead, are essential if he wants to reach the 1,237 delegates needed to win the nomination.
The complaints call into question the integrity of the voting process at a time when the party could be working to unify behind its front-runner. In an interview with conservative radio host Mike Gallagher, Reince Priebus, chairman of the Republican National Committee, pushed back against Trump's claims, saying the convention system used in Colorado is "not an affront to the people of Colorado. It just is what the rule is."
"I don't know why a majority is such a difficult concept for some people to accept," he said.
Clinton, meanwhile, hopes to capture what her team says would be an all-but-insurmountable lead by the end of the month. Campaigning across southern New York on Monday, Clinton targeted Sanders' record on guns, immigration, Wall Street reform and foreign policy.
"I have noticed that under the bright spotlight and scrutiny here in New York, Sen. Sanders has had trouble answering questions," she told reporters after a campaign event at an Indian restaurant in Queens, New York.
Sanders hit back at a rally in the upstate New York city of Binghamton, rallying supporters with a lengthy riff slamming Clinton for promoting fracking as secretary of state and only offering conditional opposition to the practice. The oil and gas drilling method, reviled by environmentalists, has been banned in New York.
The harsher tone comes just days before the two Democrats will meet onstage for their first debate in more than a month. Since their last faceoff, the contest has taken a decidedly negative turn, with the two candidates trading a series of barbs over their qualifications for the White House.
Clinton has avoided directly calling for Sanders to exit the race, saying she campaigned until the end in 2008 and she's all for a "good hard contest." But she denounced the aggressive tone that some of his supporters have taken toward her, saying she'd seen reports that her backers have been targeted and harassed.
"There seems to be a growing level of anxiety in that campaign, which I hope doesn't spill over into the way that his supporters treat other people," she said.
The April 19 primary in New York has become a make-or-break moment for both campaigns. Clinton's campaign is pushing for big wins in New York and across the northeast.
Sanders believes he can follow a string of primary wins with a victory in the delegate-rich state. He needs to win 68 percent of the remaining delegates and uncommitted superdelegates if he hopes to clinch the Democratic nomination. That would require blowout victories in upcoming states, big and small, including New York.
Associated Press 2016