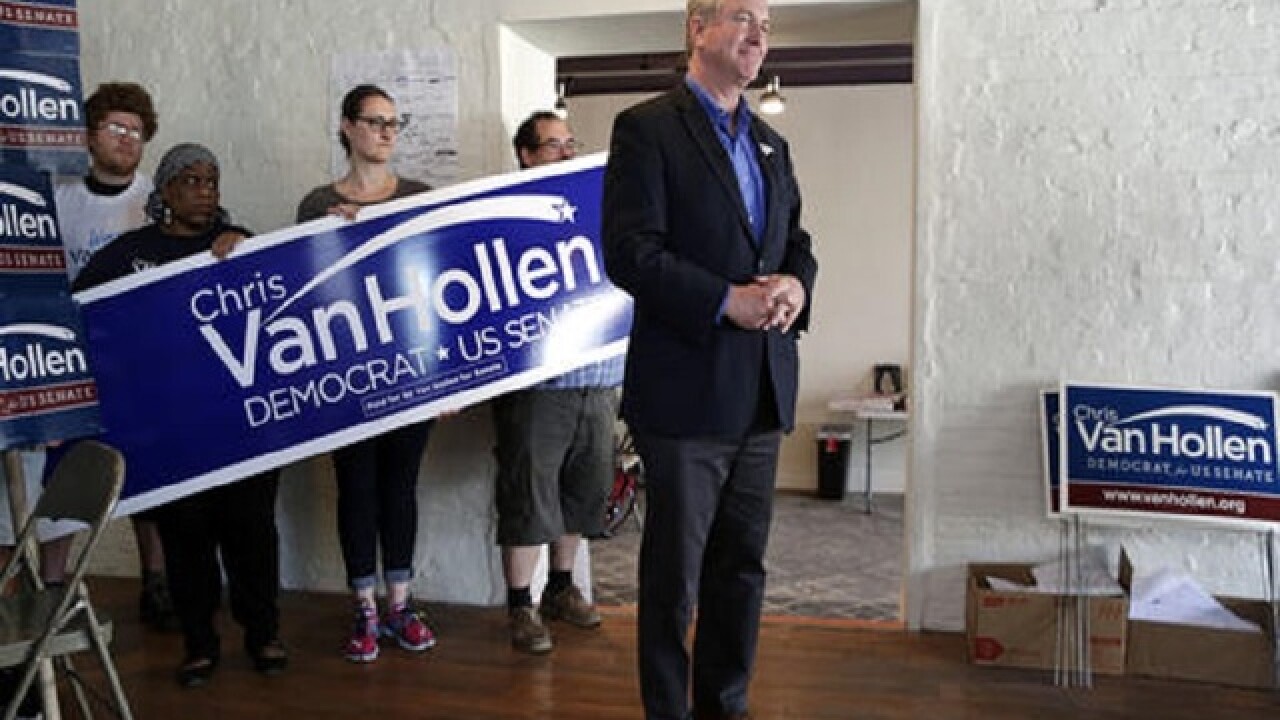 By: Associated Press
Posted at 10:45 PM, Apr 26, 2016
ANNAPOLIS, Md. (AP) — Rep. Chris Van Hollen won the Democratic primary for U.S. Senate on Tuesday, defeating Rep. Donna Edwards in a long battle that divided fellow Democrats on Capitol Hill in a race to find a successor to retiring Sen. Barbara Mikulski.
Van Hollen pointed to his record as a pragmatic progressive who is able to reach across the political aisle to get things done. Edwards campaigned as a candidate more committed to holding liberal principles without settling for political deals. Voters often said they liked both candidates and found the choice difficult.
"I've seen him in the leadership a much longer time than Donna Edwards, who I also like," said Jeff Studds, a 60-year-old retired middle school teacher who voted for Van Hollen.
In Baltimore, a judge ordered four city polling places to each stay open an extra hour because they opened late, after Edwards sought the order on Tuesday.
The race was a polarizing battle over race, gender and personality to replace the nation's longest-serving female senator. The White House and prominent national Democrats weighed in on behalf of Van Hollen, even as Edwards backers insisted that her opportunity to become only the second black female U.S. senator in history should not be denied.
The contest was characterized by negative political ads and heated debates.
Edwards criticized Van Hollen as a Washington insider, too willing to compromise liberal principles for a political deal. She cast herself as the true progressive in the race. But Van Hollen pointed to a progressive record of accomplishments, along with a willingness to work across party lines. He called Edwards ineffectual and said she was widely criticized for poor constituent services.
Republicans, meanwhile, are hoping to ride GOP Gov. Larry Hogan's popularity in November to pick up a crucial seat in a state where they are outnumbered by Democrats 2-1. Del. Kathy Szeliga emerged the winner in a crowded Republican field that included Richard Douglas, a former Defense Department appointee in the George W. Bush administration. Chrys Kefalas, who worked in former Gov. Robert Ehrlich's administration, also ran.
Van Hollen and Edwards both represent House districts that include the suburbs of the nation's capital. Van Hollen has been a congressman since 2003, and Edwards has been in office since 2008.
Van Hollen, 57, won his congressional seat in 2002, defeating incumbent Republican Rep. Connie Morella. Before that, he served 12 years as a state legislator.
Edwards, 57, was a lawyer and liberal activist before defeating incumbent Rep. Al Wynn in the 2008 primary on the way to becoming the first black woman to win election to Congress in Maryland.
Associated Press 2016