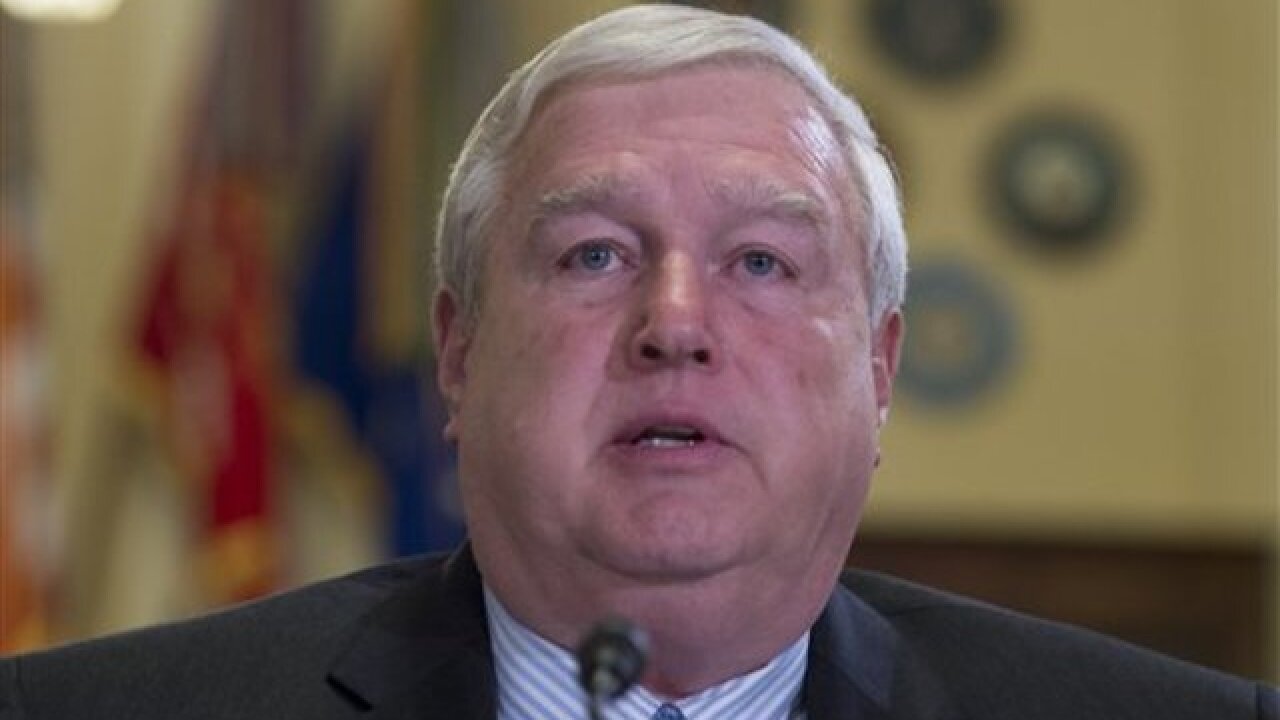 Molly Riley
<p>FILE - In this Nov. 2, 2015, file photo, Department of Veterans Affairs, Principal Deputy Under Secretary for Benefits Danny Pummill, testifies at a Veterans Affairs Committee hearing on Capitol Hill in Washington. The Department of Veterans Affairs is suspending Pummill for allowing two lower-ranking officials to manipulate the agency's hiring system for their own gain. Deputy VA Secretary Sloan Gibson says Pummill will be suspended without pay for 15 days for his role in a relocation scam that has roiled the agency for months. (AP Photo/Molly Riley, File)</p>

WASHINGTON (AP) — The Department of Veterans Affairs is suspending the head of the Veterans Benefits Administration for allowing two lower-ranking officials to manipulate the agency's hiring system for their own gain.
Deputy VA Secretary Sloan Gibson says acting VBA chief Danny Pummill will be suspended without pay for 15 days for his role in a relocation scam that has roiled the agency for months.
Pummill failed to exercise proper oversight as Kimberly Graves and Diana Rubens forced lower-ranking managers to accept job transfers and then stepped into the vacant positions themselves, keeping their senior-level pay while reducing their responsibilities, Gibson said Tuesday.
Pummill is one of VA's five highest-ranking officials and leads VBA's employees across 56 regional offices nationwide that provide compensation and pension benefits, life insurance, home loans and other services to millions of veterans.
Under VA rules, Pummill can appeal his suspension to an independent arbiter.
Pummill was the VBA's deputy chief when Rubens and Graves implemented the job relocations, which put both of them closer to their families. Pummill replaced former VBA chief Allison Hickey, who retired as allegations against Rubens and Graves were made public.
Rubens earns $181,497 as director of the VBA's Philadelphia regional office, while Graves receives $173,949 as head of the St. Paul, Minnesota, benefits office.
Graves and Rubens were reprimanded Tuesday and had their pay cut by 10 percent. The two women were reinstated to their positions last month after administrative judges overturned their firings.
The judges based their rulings, in part, on the fact that more senior officials such as Pummill had not been disciplined in the case. In a related action, the VA said it has reprimanded Beth McCoy, director of field operations for the VBA. Gibson said McCoy did not exercise proper judgment in taking over for Rubens as heads of field operations.
Gibson said the disciplinary actions were in the best interests of veterans and taxpayers. "Ultimately, that is what these decisions are about: getting back to the work of serving America's veterans," he said.
Rep. Jeff Miller, R-Fla., chairman of the House Veterans Affairs Committee, called the actions "a weak slap on the wrist."
Accountability at the VA "is almost non-existent," Miller said. "One thing is clear: this dysfunctional status quo will never change until we eliminate arcane civil service rules that put the job security of VA bureaucrats ahead of the veterans they are charged with serving."
Associated Press 2016