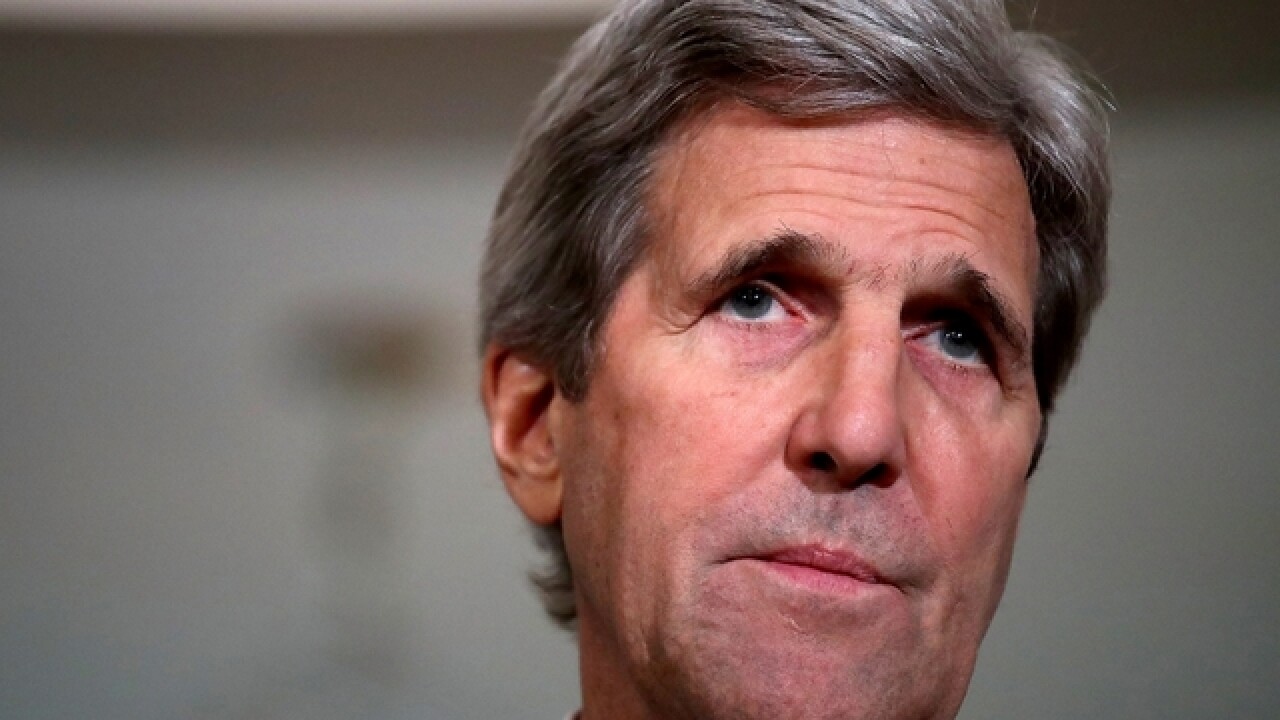 WASHINGTON (AP) — Scrambling to resuscitate a nearly dead truce in Syria, the Obama administration has again been forced to turn to Russia for help, with little hope for the desired U.S. outcome.

At stake are thousands of lives and the fate of a feeble peace process essential to the fight against the Islamic State group, and Secretary of State John Kerry has appealed once more to his Russian counterpart for assistance in containing and reducing the violence, particularly around city of Aleppo.

Kerry spoke at length on Friday with Russian Foreign Minister Sergey Lavrov to that end, and had been hoping to meet with Lavrov soon, according to U.S. officials. Kerry was scheduled to arrive in Switzerland late Sunday for talks with U.N. envoy Staffan de Mistura, Saudi Foreign Minister Adel al-Jubeir and Jordanian Foreign Minister Nasser Judeh, and planned to return to Washington on Monday.

But Lavrov was not expected to be in Geneva, complicating Kerry's efforts to make the case directly to the Russians for more pressure on their Syrian government allies to stop or at least limit attacks in Aleppo.

The State Department said Kerry, in his meetings, would "review ongoing efforts to reaffirm the cessation of hostilities nationwide in Syria, obtain the full humanitarian access to which the Syrian government committed and support a political transition."

Specific, viable options to achieve those broad goals are limited, and Friday's announcement of a new, partial cease-fire that does not include Aleppo underscored the difficulty Kerry faced.

U.S. and other officials described that initiative, brokered mainly by Russia and the United States as co-chairs of the International Syria Support Group, as a "reinforcement" of the February truce, now largely in tatters, that they hope to extend from Damascus and the capital's suburbs and the coastal province of Latakia to other areas.

"This is an agreement within the task force, but certainly on the part of the U.S. and Russia that there would be a reinforcement of the cessation of hostilities in these specific areas as a start, with the expectation that this ... would be then extended elsewhere," State Department spokesman Mark Toner said.

For Aleppo, the U.S. is considering drawing up with the Russians a detailed map of the city that would lay out "safe zones." Civilians and members of moderate opposition groups covered by the truce could find shelter from persistent attacks by Syrian President Bashar Assad's military, which claims to be targeting terrorists.

One U.S. official said "hard lines" would delineate specific areas and neighborhoods. The officials spoke on condition of anonymity because they were not authorized to discuss the matter publicly.

It was not immediately clear whether Russia would accept such a plan or if Moscow could persuade the Assad government to respect the prospective zones. Some U.S. officials are skeptical of the chances for success, but also note that it is worth a try to at least reduce the violence that has wracked Aleppo for the past week, with hundreds killed and thousands wounded.

Kerry discussed the deteriorating situation in calls over the past days with de Mistura and the head of a Syrian opposition negotiating committee. "We are working on specific initiatives to de-escalate the increased fighting and defuse tensions and hope to make tangible progress on such initiatives soon," State Department spokesman John Kirby said in a statement.

For the administration, Friday's announcement about the partial cease-fire is largely a means to measure the commitment of the warring parties to the concept of a truce that could lead to serious peace talks.

"It's a test for the Russians and for the regime, as well as for the Syrian opposition," Toner said.

The administration's problem is that the Russians, the Assad government and the opposition backed by the U.S. and its partners have all failed that test in the past.

In particular, the administration has been routinely disappointed that Russia has not lived up to pledges that U.S. officials think it has made. From the start of the conflict, the administration has sought numerous times for Moscow to use its influence with Damascus to bring about an end to the violence and to advance a political transition. At each turn, those hopes have been dashed with Russia continuing, and even increasing, its support for Assad.

U.S. officials concede there is little to suggest that will change.