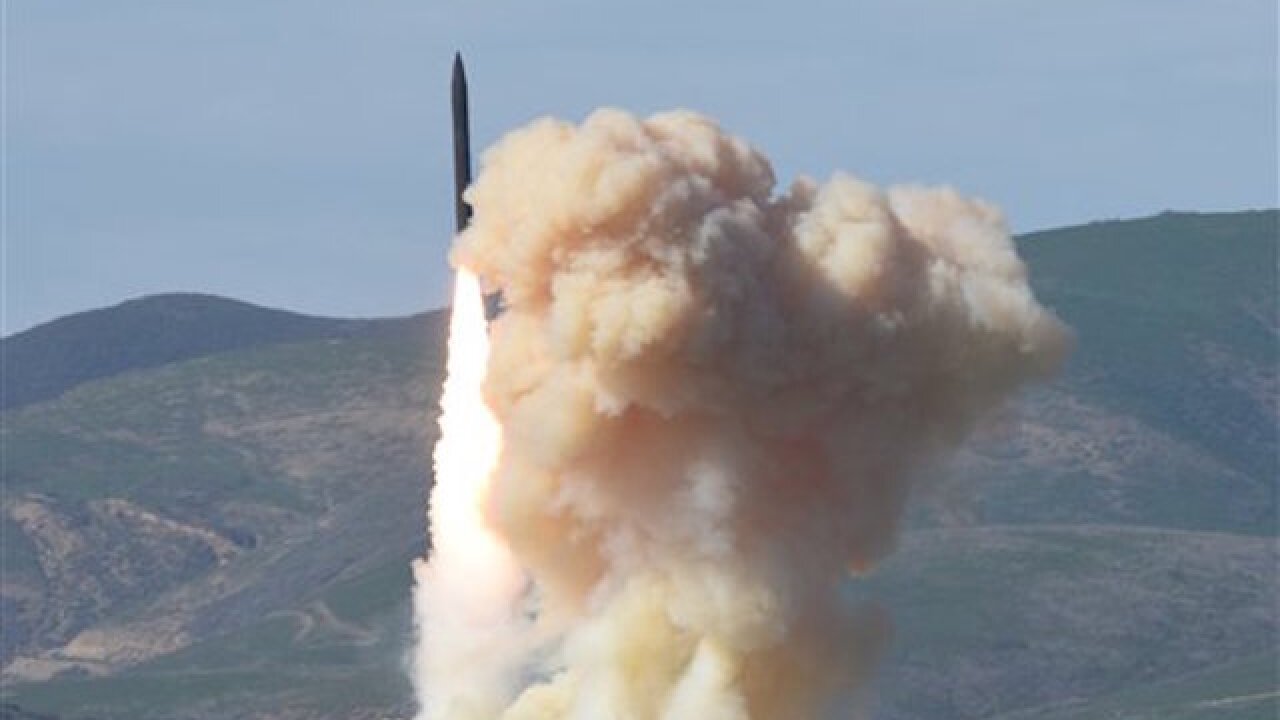 Copyright Associated Press
<p>This photo provided by the Defense Department's Missile Defense Agency, taken Jan. 28, 2016, shows a long-range ground-based interceptor is launched from Vandenberg Air Force Base, Calif. As North Korea rattles its nuclear saber and threatens to bomb the U.S. at ìany moment,î a nerve-jangling question hangs in the air: If North Korea did launch a nuclear-armed missile at an American city, could the Pentagonís missile defenses shoot it down beyond U.S. shores? (Defense Department's Missile Defense Agency via AP)</p>

SEOUL, South Korea (AP) — A North Korea missile launch meant to celebrate the birthday of the country's founder ended in failure, U.S. defense officials said, an embarrassing setback in what was reportedly the inaugural test of a new, powerful mid-range missile.

"It was a fiery, catastrophic attempt at a launch that was unsuccessful," Capt. Jeff Davis, a Pentagon spokesman, said Friday. U.S. officials are still assessing, but it was likely a road-mobile missile, given that it was launched from a location not usually used for ballistic missile launches, on the country's east coast, he said.

South Korea's Yonhap news agency carried an unsourced report that a "Musudan" missile, which could one day be capable of reaching far-off U.S. military bases in Asia and the Pacific, exploded in the air a few seconds after liftoff.

A U.S. official speaking on condition of anonymity to discuss intelligence matters told The Associated Press that it appeared to be a Musudan missile but no definitive conclusion had been reached.

Despite the failure, the North has another Musudan loaded on a mobile launcher and Pyongyang will likely fire it, according to South Korean and U.S. authorities, Yonhap reported.

U.S. Defense Secretary Ash Carter, speaking to reporters during a stop on the USS John C. Stennis aircraft carrier in the South China Sea, said that while the U.S. deemed the launch to be unsuccessful, it "was nonetheless another provocation by North Korea in a region that doesn't need that kind of behavior."

The launch comes as the two Koreas trade threats amid Pyongyang's anger over annual South Korean-U.S. military drills that North Korea calls a rehearsal for an invasion. The North has recently fired a slew of missiles and artillery shells into the sea in an apparent protest against the drills.

The surge in belligerent rhetoric and nuclear and missile activity in the North may also be linked to leader Kim Jong Un's preparations for a major ruling party meeting next month that analysts believe he will use to further solidify his autocratic rule. Some believe that Kim may try to use the country's claims of recent nuclear and missile success as a way to turn domestic focus toward tackling the country's abysmal economy.

A senior U.S. defense official, speaking on condition of anonymity because the official wasn't authorized to comment publicly, said the U.S. Strategic Command systems have detected and tracked what officials assessed as a failed North Korean missile launch.

White House Press Secretary Josh Earnest said in a statement that said the U.S. is "strongly committed" to the defense of its Asian allies, particularly South Korea and Japan.

"We're going to continue to stand with them as they face these threats but also reiterate our commitment to the defense of our allies," Earnest said.

The North American Aerospace Defense Command said the missile launched from North Korea did not pose a threat to North America.

The South's Defense Ministry said it wasn't immediately known whether the missile fired from an eastern costal area Friday morning was a short-range or mid-range missile.

The North's launch came amid speculation in the South that its rival was preparing to test a medium-range missile with a range of 3,500 kilometers (2,180 miles) — enough to reach U.S. military installments in Japan and Guam. Foreign experts have nicknamed the missile "Musudan" after the village in the northeast where North Korea has a launchpad.

North Korea has never flight-tested a Musudan, though it unveiled the missile during a 2010 military parade. South Korean defense officials said North Korea has deployed Musudan missiles since 2007.

Friday is the birthday anniversary of the late Kim Il Sung, the current leader's grandfather and the nation's founder. North Korea has occasionally used such celebrations to stage nuclear or missile tests that outsiders consider provocations.

In the North Korean capital, Pyongyang, citizens in formal clothing lined up to bow deeply before huge statues of Kim Il Sung and Kim Jong Il, his son and the father of Kim Jong Un, and laid brightly colored flowers at the statues' feet.

North Korea has unnerved the international community this year with an escalating campaign of belligerence. This includes a nuclear test in January, its fourth, and a long-range rocket launch in February, as well as nuclear threats against the United States and Seoul.

There is debate among analysts about the exact state of the North's nuclear capabilities — many believe Pyongyang has a handful of crude nuclear bombs — but each nuclear and missile test pushes them farther along in their goal of a nuclear-armed arsenal of long-range missiles.