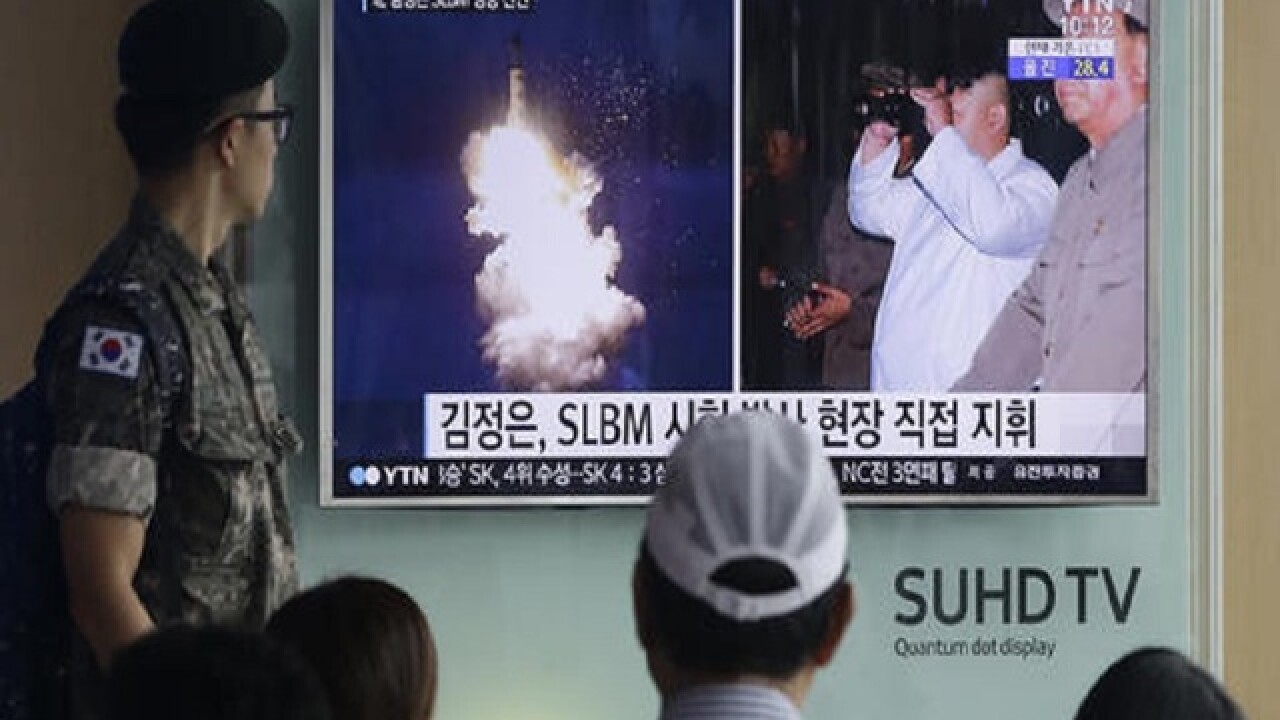 UNITED NATIONS (AP) — The U.N. Security Council is strongly condemning North Korea's latest ballistic missile launches and threatening "further significant measures" if it refuses to stop its nuclear and missile tests.
The U.N.'s most powerful body agreed to the tough statement hours after a closed-door emergency meeting Tuesday to discuss the three launches which landed near Japan.
The council expressed serious concern that North Korea carried out the launches "in flagrant disregard" of its demands.
It called for stepped-up implementation of sanctions against North Korea.
THIS IS A BREAKING NEWS UPDATE. Check back soon for further information. AP's earlier story is below.
The United States, Japan and South Korea stood united Tuesday in demanding that the U.N. Security Council condemn North Korea's latest ballistic missile launches and take further action to enforce its orders to halt nuclear and missile tests.
The three countries called an emergency closed-door meeting of the council in response to North Korea's firing of three missiles Monday that traveled about 1,000 kilometers (620 miles) and landed near Japan. Afterward, standing side-by-side, their ambassadors spoke to reporters.
U.S. Ambassador Samantha Power said "the Security Council must remain unequivocal and united in condemnation of these tests and we must take action to enforce the words we put on paper — to enforce our resolutions."
North Korea launched the missiles while China was hosting the Group of 20 economic summit, she said, once again showing the North's "blatant disregard" for U.N. sanctions and its international obligations "and its willingness to provoke and to threaten the international community with impunity."
Power said North Korea has carried out 22 missile launches so far this year and the latest hit "within 300 kilometers of Japan's coast." With each test, she said, North Korea demonstrates further advancement of its ballistic missile program whose aim according to the country's leader Kim Jong Un is "to arm the systems with nuclear weapons."
Japan's U.N. Ambassador Koro Bessho said he was encouraged that in the council meeting "there was much stronger show of unity" and all members "condemned the launches in very strong terms."
The tests not only threaten Japan's national security but the region and beyond, he said, stressing that the missiles were launched without any prior notification and could have hit planes or ships.
Bessho said Japan wants the council to consider further actions it can take "in unanimity, in unity, in bringing about change in North Korea's behavior."
South Korea's deputy U.N. ambassador Hahn Choong Hee said the international community should be united in sending a "clear and unequivocal message to North Korea that if they continue to provoke and violate their international commitments and sanctions, they will face much stronger and insurmountable and significant counter-measures from the international community."
What action the council takes remains to be seen and a lot depends on China, North Korea's neighbor and only major ally, though ties have frayed over the nuclear and missile tests and what many outsiders see as other provocations in recent years.
China's U.N. Ambassador Liu Jieyi, apparently annoyed that the latest missiles were fired during the G20, told reporters as he left the meeting: "The council will work on a press statement."
Power said the council came together in August to condemn four previous launches "and I think we have every expectation that we will do so again."
"There were very strong and numerous voices in the room for doing more," she said. "So without getting ahead of the council we were also interested in increasing the consequences after this pattern of using these launches to advance the capabilities of the program."
Copyright 2016 The Associated Press. All rights reserved. This material may not be published, broadcast, rewritten or redistributed.