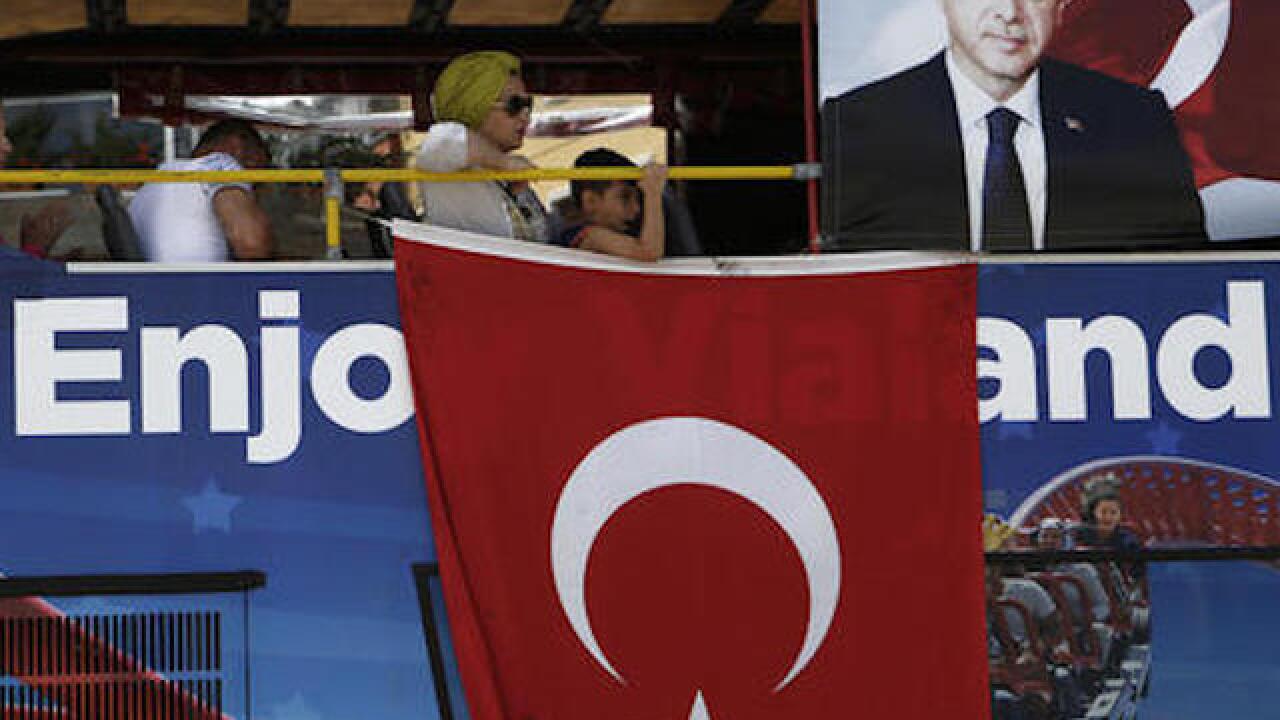 Copyright Associated Press
Petros Karadjias
<p>People sit on a tour bus with Turkish flags and a portrait of the Turkish President Recep Tayyip Erdogan in Taksim square in Istanbul, Monday, July 25, 2016. Turkish media say authorities have issued warrants for the detention of 42 journalists and detained 31 academics, as the government pressed ahead with a crackdown against people with allegedly linked to a U.S.-based Muslim cleric. (AP Photo/Petros Karadjias)</p>

ANKARA, Turkey (AP) — A court in Turkey issued a formal warrant Thursday for the arrest of U.S.-based Muslim cleric Fethullah Gulen, who the government accuses of being behind the failed July 15 coup that left more than 270 people dead.

The government says Gulen, a former ally of President Recep Tayyip Erdogan who lives in self-imposed exile in Pennsylvania, masterminded the failed coup attempt by renegade officers in Turkey's military and wants him extradited to Turkey.

Gulen has denied involvement or prior knowledge of the coup attempt.

Ankara has not yet made a formal extradition request, but the arrest warrant could be the prelude. Washington has asked for evidence of the cleric's involvement, and has said the extradition process must be allowed to take its course.

Anadolu said the court issued the warrant over a number of accusations, including an "attempt to eliminate the government of the Turkish Republic or to prevent it from carrying out its duties."

More specifically, Anadolu said the court based the arrest warrant on accusations the coup plotters tried to assassinate Erdogan, kidnapped Chief of Staff Gen. Hulusi Akar and other military officers, bombed parliament and killed police and civilians who resisted.

"It has been understood without a doubt that the attempted coup was an activity of the terror organization and that it was carried out with the orders of its founder, suspect Fethullah Gulen," Anadolu quoted from the court decision.

It is not the first time an arrest warrant has been issued for Gulen, who broke ranks publicly with Erdogan in 2013. In December 2014, a court issued a warrant for him on accusations of running an armed group.

Turkey has designated Gulen's movement, which runs charities, schools and businesses across the world, as a terrorist organization and has launched a widespread crackdown on suspected members since the failed coup.

"Without doubt, this organization has an extension in the business world. Maybe it is what they are most powerful at," he said during a speech to the heads of chambers of commerce in Ankara. "We are determined to totally cut off all business links of this organization, which has blood on its hands."

The president said that every cent that goes to the Gulen movement "is a bullet placed in a barrel to be fired against this nation. In the same way that we do not pardon those who fire the bullet, we will not forgive those who financed the bullet."

Erdogan added that the purge of the military would continue.

"After July 15, this sneaky organization's structure in the Turkish Armed Forces has started to be uncovered," he said. "For now, those who are captured are the tip of the iceberg. Efforts are continuing for others."

Separately, the deputy chairman of Turkey's ruling Justice and Development Party, Mehdi Eker, said countries around the world need to take action against schools or other establishments linked to Gulen.

Eker said the cleric's movement had hundreds of schools, charities or other establishments in more than 100 countries and warned they too could face "security risks" from the group in the future.

"If we had seen that these schools were not innocent educational nests but nurseries raising members for a terror organization, we would not have lived through the (attempted coup)," he told journalists in Ankara.

"It is our responsibility to warn countries that have (Gulen-linked) schools," Eker said. "In Africa, we know that they work as nurseries (for terror) and we want to warn them."