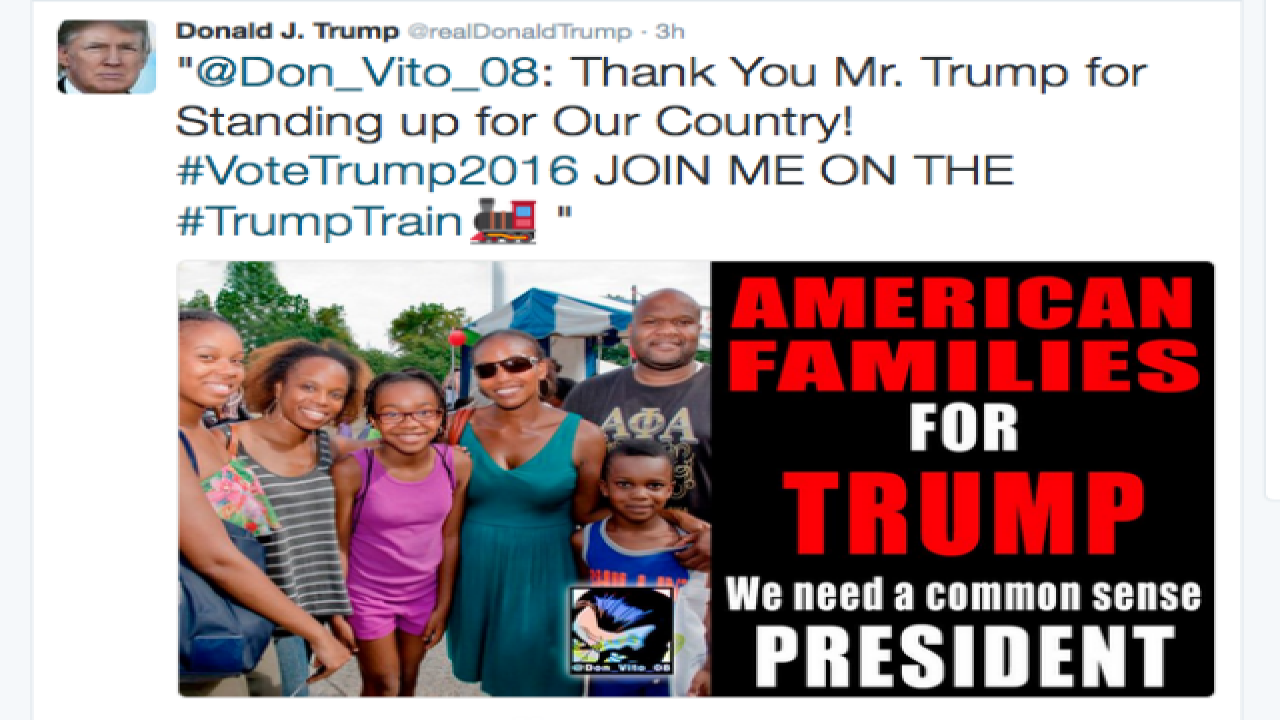 CINCINNATI – A photo of a Cincinnati family apparently tweeted by the Donald Trump campaign and ripped off from WCPO.com created an uproar on social media and with the family over the weekend.

The picture has been doctored (above) with the words: "American Families For Trump: We need a common sense president" and suggests they are on the "Trump Train."

But the parents, Eddie and Vanessa Perry, said they are not endorsing or publicly supporting any presidential candidate, according to a BuzzFeed story.

“When I saw it, I immediately knew it was political propaganda,” Eddie Perry said.

“I’m not saying there aren’t black families who endorse Trump,” he said. “However, this black family didn’t endorse anyone.”

The photo, tweeted by @realDonaldTrump, was taken by a WCPO freelancer at the Midwest Regional Black Family Reunion in Cincinnati last August. Here's the original photo as it appeared – undoctored - in a WCPO.com photo gallery from that event.

The tweeted photo was stamped by @Don_Vito_08 and posted on the same account that tweeted an unflattering image of Ted Cruz's wife and a photo of Trump's wife in March.

Some Twitter users caught the deception, traced the photo to WCPO.com, and made the connection with @Don_Vito_08.

@MarkCzerniec @realDonaldTrump Is this for real? What a disgrace! Someone needs to check this @jaketapper @cnn @TaraSetmayer @ananavarro

@MarkCzerniec @realDenaldTrump @realDonaldTrump Oh my God. You are freaking kidding me. How stupid!

Take a look at this and Trumps morning retweet. Unreal! He is such a fraud! https://t.co/68PTIG5aHB

@MarkCzerniec you found this too! The account he RT'd is a Trump camp fake account for cover I'm pretty sure. Same: pic.twitter.com/EmKgZlOR6Y

The photographer, Joseph Fuqua, told WCPO  he got a tweet telling him that his photo had been doctored and "seen by millions." No one contacted him to ask for permission, he said.

"I ought to send him a bill," Fuqua said, referring to Trump.

"Look, I know how campaigns work and I don't imagine Donald Trump did it personally. It was some intern. But if a billionaire is going to use my photo, he should pay for it."