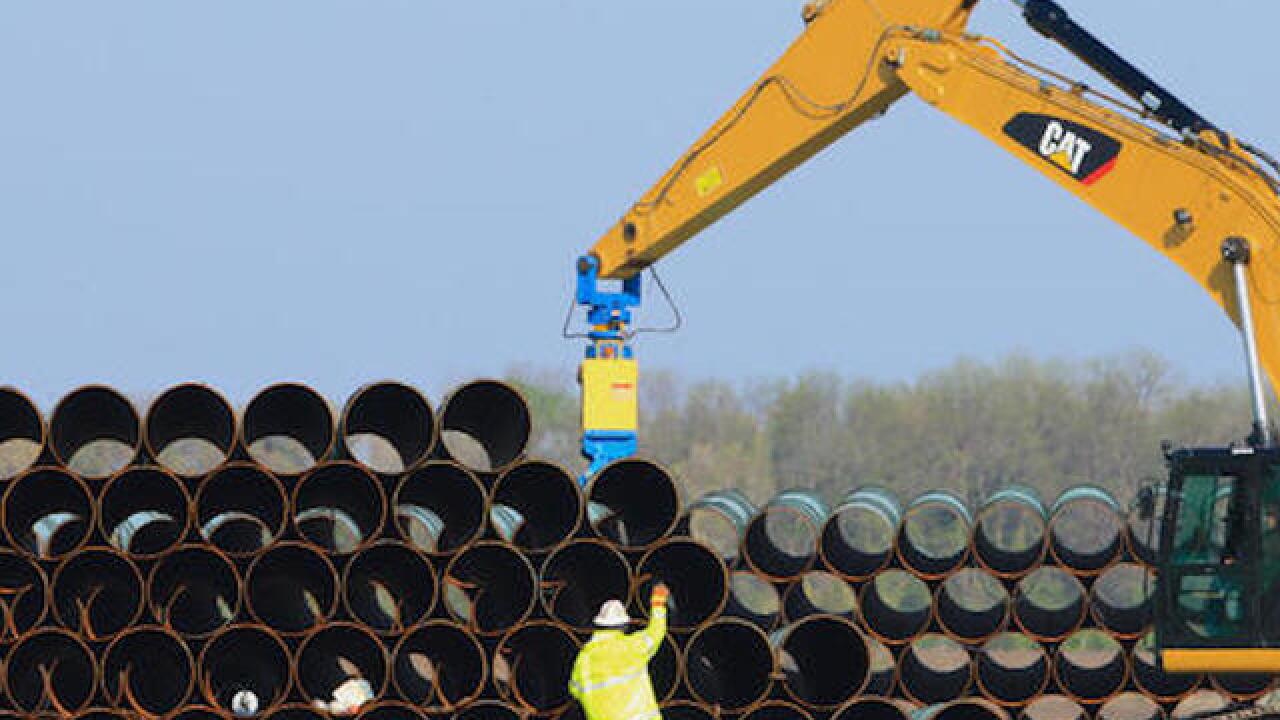 Copyright Associated Press
Nati Harnik
<p>In this May 9, 2015 file photo, pipes for the proposed Dakota Access oil pipeline, that would stretch from the Bakken oil fields in North Dakota to Illinois, are stacked at a staging area in Worthing, S.D. On Friday, April 1, 2016, members of the Standing Rock Sioux and other tribes plan a protest ride against the proposed pipeline Friday, April 1, 2016, across the Standing Rock Reservation, which straddles the North Dakota-South Dakota border. (AP Photo/Nati Harnik, File)</p>

BISMARCK, N.D. (AP) — TransCanada Corp. has resumed sending oil through the Keystone Pipeline after a weeklong shutdown prompted by a leak and oil spill in southeastern South Dakota.

The pipeline came back online Sunday, but with a reduced pressure under a controlled restart whose terms were ordered by the federal Pipeline and Hazardous Materials Safety Administration. TransCanada also will be reviewing construction records, doing additional inspections of the pipeline and additional ground and air monitoring, spokesman Mark Cooper said Monday.

TransCanada estimates about 400 barrels of oil, or just under 17,000 gallons, spilled onto private land during the leak, the duration of which the company says is unknown. Federal regulators sent the company an order Saturday that said an "anomaly" on a weld on the pipeline was to blame for the leak, but the cause wasn't immediately determined. When a third-party metallurgist hired by TransCanada discovered the leak, it was releasing oil at a rate of about two drops per minute.

State Department of Natural Resources environmental scientist Brian Walsh said oil contaminated only the nearby soil and not any waterways or aquifers. Tainted soil was removed and work will continue to restore the site, Cooper said. The two directly affected landowners will be compensated for their time and any damages, he said.

"We recognize this is a significant inconvenience to their day-to-day lives," Cooper said.

The leak was discovered April 2 on the pipeline that transports crude from Alberta, Canada, to refineries in Illinois and Oklahoma, passing through the eastern Dakotas, Nebraska, Kansas and Missouri. It can handle 550,000 barrels, or about 23 million gallons, daily. Cooper did not have an estimate on when the pipeline would ramp up to normal operations.

Analysts have said the shutdown will have only a short-term impact on the oil market, and that consumers are unlikely to see an impact at the gas pump because the system is already oversupplied.

The state Department of Natural Resources has the authority to levy fines for such incidents, but Walsh declined Monday to speculate on that possibility.

"At this point we're focused on getting the impacts cleaned up," he said.

The 2,639-mile Keystone Pipeline is part of a system that also would have included the Keystone XL pipeline had President Barack Obama not rejected the project in November.

The conservation and family agriculture group Dakota Rural Action said after the spill that it raises questions about the company's ability to safely operate the pipeline.

TransCanada has said the leak is the first detected on the pipeline since it began operating six years ago, though there have been leaks at pumping stations.

"This is the safest way to transport oil to Americans for their everyday lives," Cooper said.