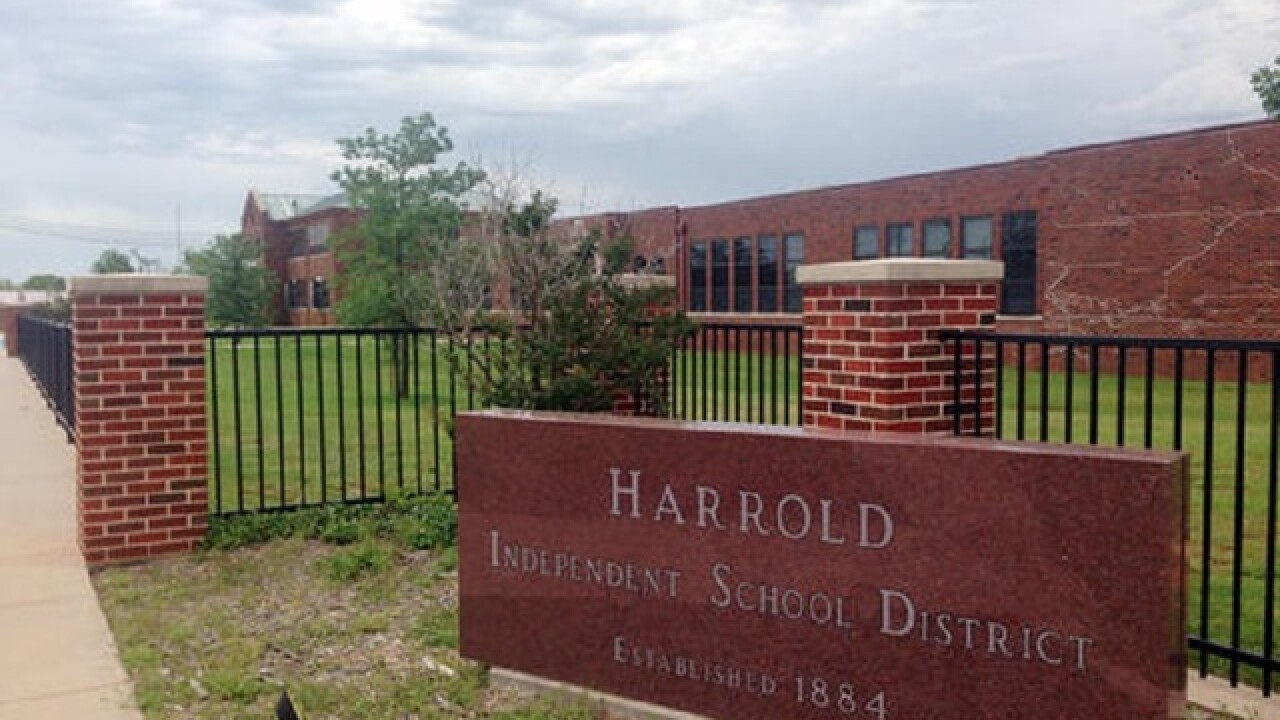 Paul J. Weber
<p>A Harold Independent School District building is shown on Thursday, May 26, 2016, in Harrold, Texas. The unlikely battleground over whether U.S. schools must provide bathroom rights to transgender students is here in Harrold: a farming town with only 100 students, a high school graduating class of four this May and not one transgender person on campus. (AP Photo/Paul J. Weber)</p>

By: Associated Press
Posted at 10:06 PM, May 26, 2016
HARROLD, Texas (AP) — An unlikely battleground over whether public schools must allow transgender students to use the bathroom of their choice is taking shape in two tiny towns in Texas and Arizona, neither of which currently enrolls anyone who is transgender.
Eleven states suing the Obama administration claim that a new federal directive about transgender students thrusts "seismic changes" upon 100,000 schools nationwide. But only two districts joined the lawsuit — Harrold, a Texas farming town with 100 students and a 2016 graduating class of four, and the Heber-Overgaard Unified School District northeast of Phoenix, a conservative region where summer homes are popular.
The directive handed down this month says transgender students must be allowed to use bathrooms and locker rooms that match their gender identity. It is a theoretical scenario at best for Harrold and Heber-Overgaard, which together have roughly 550 students.
Kindergarteners and high school students in Harrold share 10 bathrooms in a single brick schoolhouse that is shorter than the football field, where the Harrold Hornets play six-man football because there are not enough players for 11. A few times a day, a train rumbles past the schoolhouse. Superintendent David Thweatt says "hobos" sometimes jump off and wander toward campus. Once, he said, a drifter holed up in a school bus and left a smell that took days to air out.
It's those sorts of strangers, Thweatt says, who could take advantage of bathroom rights for students who are transgender. Even the mere word made him fidget Wednesday while sitting in the teacher's lounge, where Thweatt is used to visiting with reporters. The district previously drew national attention when it encouraged teachers to carry handguns in the classroom.
"I don't agree with the term. Tell me, exactly, where that person fits into?" said Thweatt, 55, who is one of two dozen employees in the district. "If you're just saying, 'I feel like something else,' then that opens the door very widely. It's a slippery slope. What happens when someone says, 'I'm a 35-year-old, but I feel like a 15-year old?' We're going to say what you really are."
Suing the federal government, however, wasn't Harrold's idea.
Thweatt said Texas Attorney General Ken Paxton's office called him May 17, four days after U.S. Attorney General Loretta Lynch announced the directive, and said there was "no room in our schools for discrimination."
Thweatt said he thinks he got the call because someone in Paxton's office knew of him. Legal experts say a more likely reason was strategy: Harrold is near the Texas-Oklahoma border and within the northern Texas federal court district where the lawsuit was filed. The next stop would be the 5th U.S. Circuit Court of Appeals in New Orleans — one of the nation's most conservative benches.
"It's no accident this case was filed in Texas," said Carl Tobias, a law professor at the University of Richmond.
The lawsuit asks a judge to declare the directive unlawful, accusing the Obama administration of using powers reserved for Congress and conspiring "to turn workplaces and educational settings across the country into laboratories for a massive social experiment." Other states bringing the challenge are Oklahoma, Alabama, Wisconsin, West Virginia, Tennessee, Maine, Arizona, Louisiana, Utah and Georgia.
Asked why Harrold was chosen to join the lawsuit, Paxton spokesman Marc Rylander would say only that the Texas attorney general's office "engages with many concerned parents and school officials." The White House has declined to comment.
In Arizona, the Heber-Overgaard Unified School District has about 450 students in kindergarten through 12th grade. School officials defended their involvement as a matter of local control and not the socially divisive issue of transgender rights.
Opponents of the directive say school districts could lose federal education dollars if they don't comply, although federal officials have not explicitly made that threat.
Ron Tenney, superintendent of the Arizona district, called the risk of losing government money "kind of disturbing."
Harrold has previously enrolled openly gay students, Thweatt said, proudly adding that they were not bullied.
He said a transgender student would be welcome in the hallways, even though the school board passed a policy this week requiring students to choose the restroom based on their birth certificate. He said the timing was unrelated to the lawsuit filed just two days later.
"We're not mean. We're not awful. As a matter of fact, we can be friendlier and more accommodating than any other place, small schools," Thweatt said. "But our school is not just kids."
Copyright 2016 The Associated Press. All rights reserved. This material may not be published, broadcast, rewritten or redistributed.