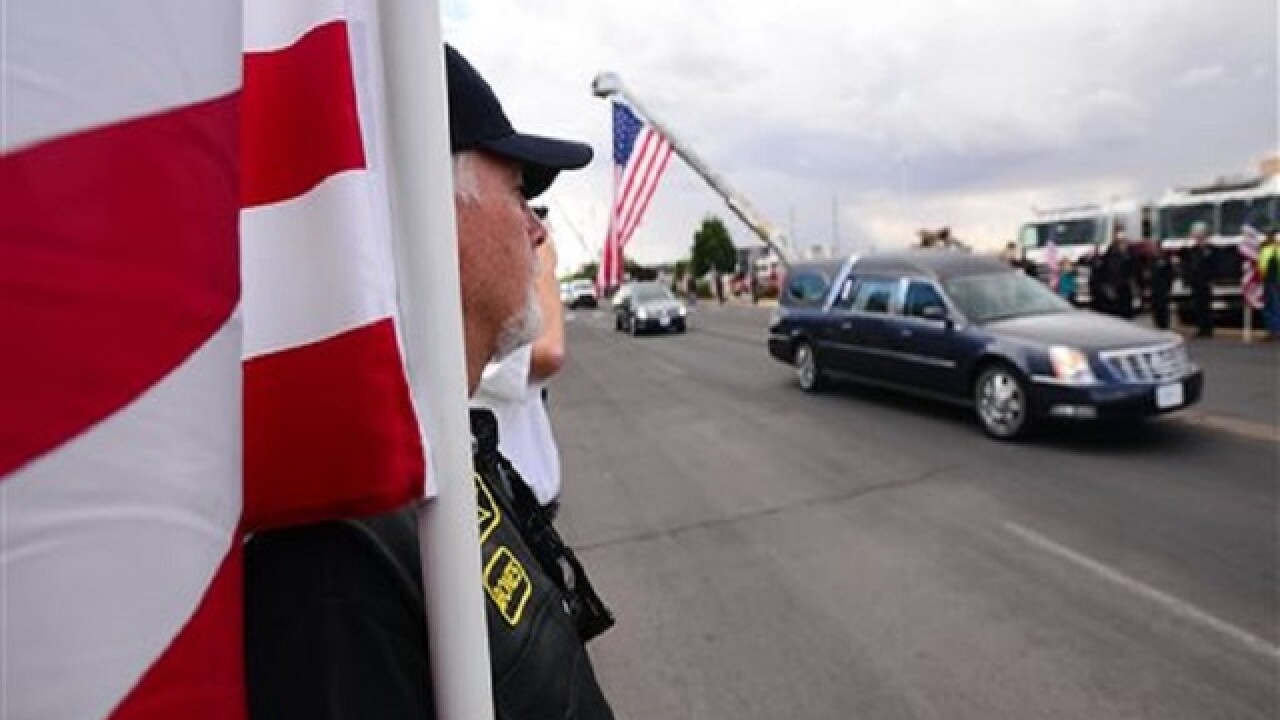 Adolphe Pierre-Louis
<p>Vietnam War Veteran John Pummell carries a flag while the hearse carrying Hatch Police Officer Jose Chavez approaches the Pan American Center for a public funeral in Las Cruces, N.M., Sunday, Aug. 21, 2016. Chavez, who was fatally shot during a traffic stop, was remembered Sunday as a man who worked tirelessly to get a job in law enforcement, ultimately winning over the small village he was charged with protecting. (Adolphe Pierre-Louis/The Albuquerque Journal via AP)</p>

LAS CRUCES, N.M. (AP) — A New Mexico police officer who was fatally shot during a traffic stop was remembered as a man who worked tirelessly to get a job in law enforcement, ultimately winning over the small village he was charged with protecting.
Thousands gathered Sunday to pay their respects to Hatch police Officer Jose Chavez, who authorities say was shot and killed by an Ohio fugitive in southern New Mexico. A crowd that included officials such as Gov. Susana Martinez packed the Pan American Center in Las Cruces.
Chavez's flag-draped coffin arrived in a Navy blue hearse. Officers from across the region and residents lined the 9-mile procession route that began in Hatch, a small village that normally would be celebrating its famous green chile harvest.
A 33-year-old father of two daughters, Chavez was a two-year veteran of the Hatch police force.
He was shot Aug. 12 and died at an El Paso, Texas, hospital.
Bishop Oscar Cantu told the crowd that Chavez's final words were a request to tell his mother and his entire family that he loved them.
"When his voice should not have been audible, he spoke clear and audible words of love," Cantu said. "In his final moments, he was thinking of love."
Jesse Denver Hanes, of Columbus, Ohio, faces a first-degree murder charge in Chavez's death. He also is a suspect in the death of a 62-year-old man in Ohio, authorities said.
In a letter from Hatch police read aloud at the service, department officials recalled how Chavez interviewed to be an officer in 2014 and later exceeded all expectations. He had an infectious smile that made him stand out from the five other patrol officers. Chavez also had a soft spot for animals and a knack for catching stray dogs and cats.
Born in Juarez, Mexico, Chavez was a student at New Mexico State University. School officials say he was 16 credits short of his bachelor's degree in criminal justice.
He became a U.S. citizen in 2011, which was a steppingstone to his real passion: law enforcement.
"Jose worked hard to earn his American citizenship. But for him, that wasn't enough," Martinez said. "He insisted on giving back, on serving the community and country that he loved."
Martinez ordered flags to fly at half-staff earlier this week in honor of the officer, calling his killing a senseless act and tragic reminder of the dangers law enforcement officers face daily.
Martinez pointed to Chavez's death and other recent events, saying lawmakers should reconsider reviving the death penalty when they return to Santa Fe for the next legislative session.
On Monday, Chavez was honored with a law enforcement-led procession that took his body from the Office of Medical Investigator in Albuquerque to a funeral home in Las Cruces.
Copyright 2016 The Associated Press. All rights reserved. This material may not be published, broadcast, rewritten or redistributed.