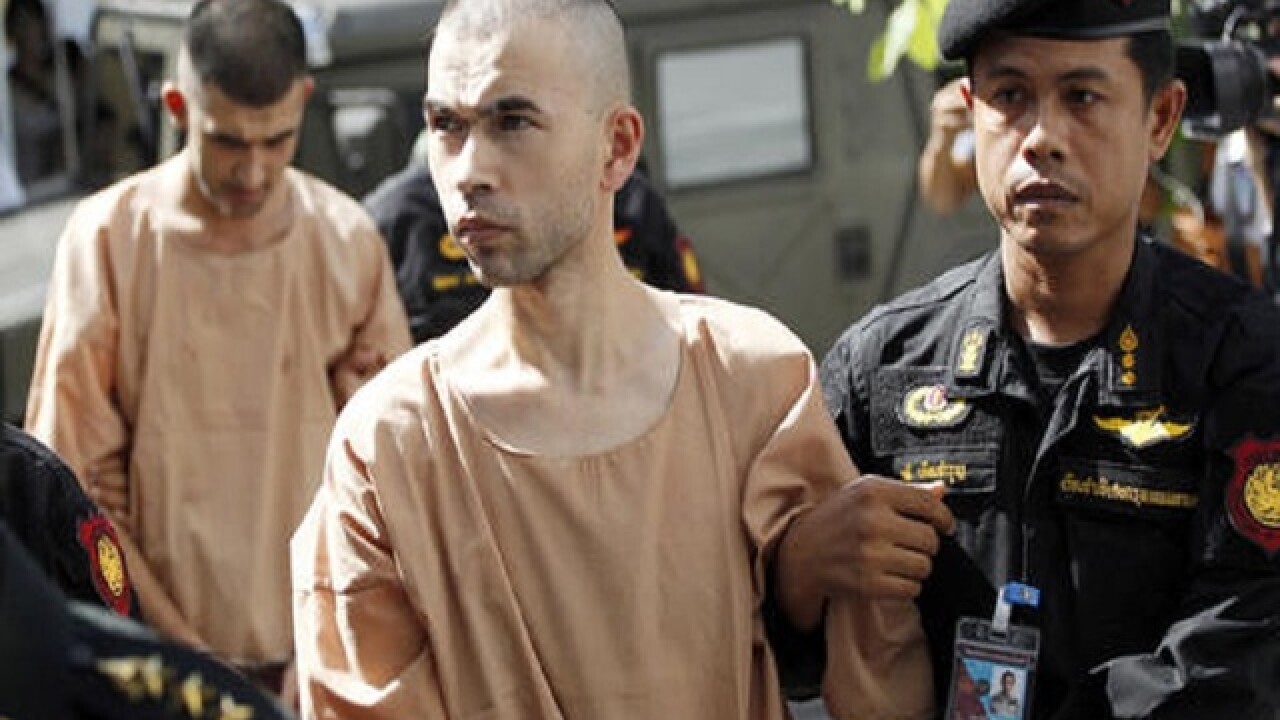 By: Associated Press
Posted at 2:09 AM, Aug 23, 2016
BANGKOK (AP) — A Thai military court on Tuesday rejected allegations by two foreign defendants that they were tortured in custody and refused to transfer them to a new prison while being tried on charges of bombing a popular Hindu shrine in Bangkok that left 20 people dead.
In previous preliminary hearings the two men have said they were tortured and mistreated by their jailors in a military detention, and on Tuesday pleaded to be moved to a different correctional facility.
"After investigating these claims, the court finds them to be false and the defendants will remain where they are since this is a case of national security," one of the three judges on the panel ruled.
The judges, who have not been identified in keeping with protocol in military trials, said the defendants' safety may be at risk in a regular correctional facility because of the high-profile nature of the case, and that they were safer in military detention.
The ruling came on the first day of the trial of the two ethnic Uighurs of Chinese nationality. But the opening day, which was set aside for recording witness testimonies, got off to a shaky start when the court realized that there was no Uighur-language translator available. The hearings scheduled for Tuesday and Wednesday were postponed to Sept. 15-16.
The two men — Mieraili Yusufu and Bilal Mohammad, also known as Adem Karadag — have pleaded not guilty. At a recent pre-trial appearance they broke down in tears alleging mistreatment and torture by Thai authorities.
They are the only two men in custody out of the 17 people that authorities say were responsible for the Aug. 17, 2015, bombing of the Erawan shrine in Bangkok's most famous shopping district of Ratchaprasong. It was one of the deadliest acts of violence in Thailand in decades.
The Erawan shrine, dedicated to Hindu god Brahma, is popular among Chinese and other tourists. Of the dead, 14 were tourists. Many Chinese were among the 120 people injured.
Thai authorities have said the bombing was revenge by a people-smuggling gang whose activities were disrupted by a crackdown. However, some analysts suspected it might have been the work of Uighur separatists angry that Thailand in July had forcibly repatriated scores of Uighurs to China, where they may be persecuted.
Chuchart Kanpai, the lawyer for one of the defendants, has told reporters in the past that Bilal had been tortured to admit that he was the person seen in surveillance video planting the bomb. Bilal says his captors poured cold water into his nose, threatened to send him back to China and had a barking dog frighten him.
Police say the case against the two men is supported by closed-circuit television footage, witnesses, DNA matching and physical evidence, in addition to their confessions. Police believe Yusufu detonated the bomb minutes after a backpack containing the device was left at the shrine by Bilal.
Since a May 2014 coup installed the military in power, its courts in Thailand have handed criminal cases deemed to involve national security.
The two men have been held at an army base since their arrest in late August and early September 2015. No other details of their interrogation have been revealed. Some of the 15 other suspects are Turks, with whom Uighurs share ethnic bonds, and Turkey is home to a large Uighur community. Beijing charges that some Uighurs are Islamist terrorists and that some have been smuggled out of China to join Islamic State fighters in Syria via Turkey.
Copyright 2016 The Associated Press. All rights reserved. This material may not be published, broadcast, rewritten or redistributed.