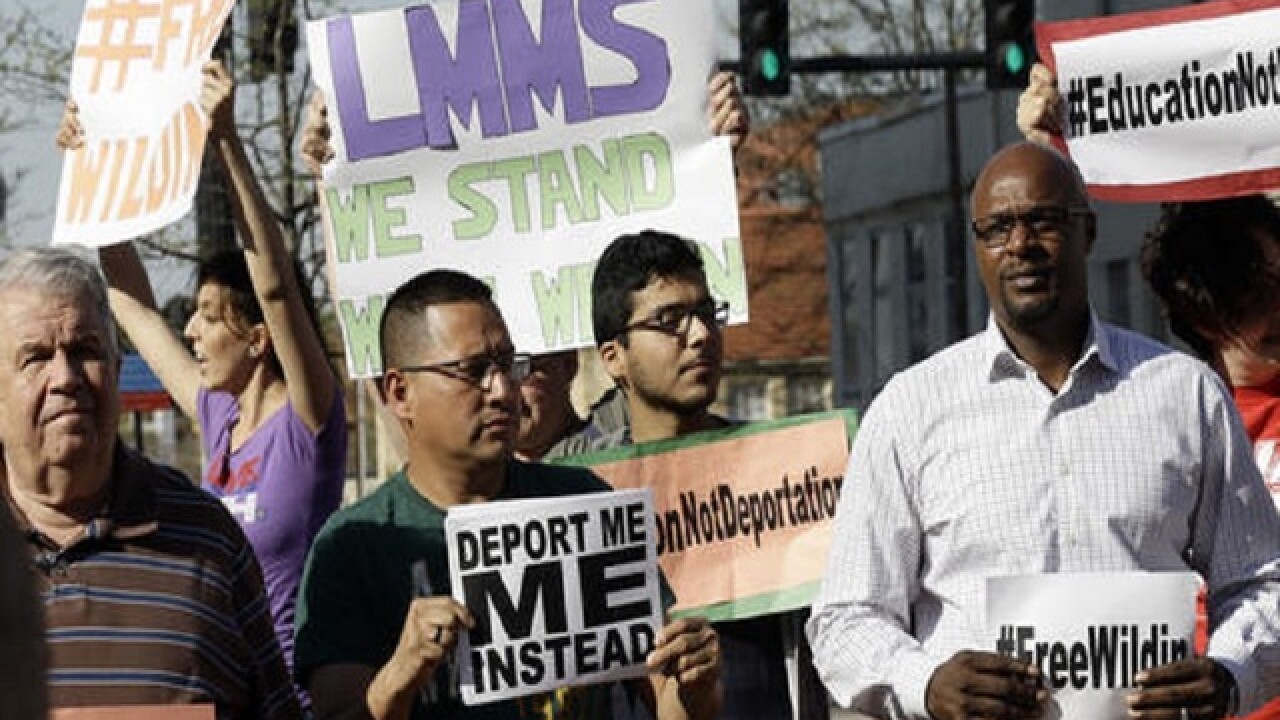 Gerry Broome
<p>Supporters of 19-year-old Wildin Acosta participate in a rally in Durham, N.C., Thursday, March 24, 2016. Supporters are calling on federal immigration officials to release Acosta and other detained teenagers who came to the U.S. as unaccompanied children. (AP Photo/Gerry Broome)</p>

DURHAM, N.C. (AP) — A teen who says he risks death if he's deported to his native Honduras should be released from the custody of immigration officials and returned to North Carolina so he can finish high school, supporters said at a rally Thursday.
About 50 people showed up in support of Wildin Acosta, 19, a senior at Riverside High school who is being held in a rural jail in Georgia. After the director of U.S. Immigration and Customs Enforcement issued an order Sunday temporarily preventing the deportation of Acosta, his attorney Monday filed an appeal, which was granted, an ICE spokesman said.
His absence at school has created fear among other students, who want Acosta to return by the time the fourth quarter begins April 4 so he can graduate in June, teachers and students said.
"I believe that his triumph will be that this year he will be able to graduate as a senior with me and all of the 300 to 400 classmates that he has," student Axel Herrea said as supporters held signs and chanted phrases such as "education not deportation."
Acosta fled Honduras in 2014 after he said a gang member threatened to kill him.
Teacher Ellen Holmes said Acosta was awakened at 3 a.m. Monday in his jail cell and told he was being deported even though he had been granted the stay.
"Then they kept him detained and alone, thinking he was going to be deported for over 3.5 hours," she said. "I get asked every single day, 'where's Wildin? When's he coming back? What's going on with him, Ms. Holmes? What's going to happen?"
She said some students are fearful of coming to school and attendance has dropped.
ICE spokesman Bryan Cox referred questions about Holmes' comments about the wake-up call to Corrections Corp. of America, which manages the facility where Acosta is being held.
CCA spokesman Jonathan Burns said the company's workers follow ICE's orders.
"When we receive instructions from ICE to carry out the transport of a detainee like that, we follow suit," he said. "And if at some point that instruction is canceled, we carry that out as well."
The stay Acosta received pauses his deportation while the immigration court considers the appeal, Cox said.
Supporters said Acosta is one of about 800 teenagers who arrived in the U.S. as unaccompanied children and have been detained or deported by U.S. Immigration and Customs Enforcement since October. They also rallied in support of five other North Carolina students they say are being detained and threatened with deportation.
Two were in school in Charlotte and one each in schools in Greenville, Thomasville and Raleigh, organizer Ivan Almonte said. Three North Carolina teens have already been deported, he said.
Rodney Ellis, president of the North Carolina Association of Educators, said Acosta and the other five detained students "are not a threat to our schools. They should not be sitting in a jail cell. They should be in a classroom, not only learning about math or science but about problem solving and being a valued member and contributor to our society. "
Associated Press 2016