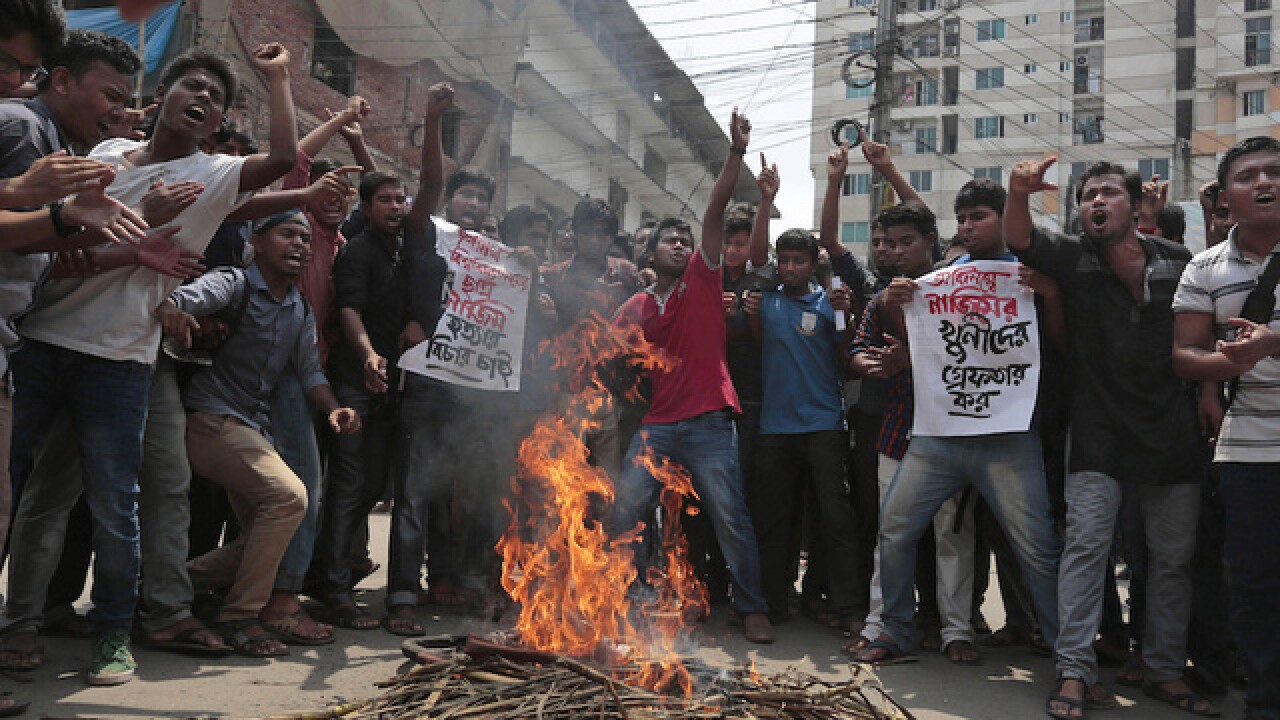 <p>Bangladeshi students protest seeking arrest of three motorcycle-riding assailants who hacked a student activist, Nazimuddin Samad, to death as he walked with a friend, in Dhaka, Bangladesh, Thursday, April 7, 2016.</p>

NEW DELHI (AP) — Three motorcycle-riding assailants hacked and shot a student activist to death as he was walking with a friend along a street in Bangladesh's capital, police said Thursday.

The killing on Wednesday night follows a string of similar attacks last year, when at least five secular bloggers and publishers were killed, allegedly by radical Islamists.

Police suspect 28-year-old Nazimuddin Samad was targeted for his outspoken atheism in the Muslim-majority country and for supporting a 2013 movement to demand capital punishment for war crimes involving the country's independence war against Pakistan in 1971, according to Dhaka Metropolitan Police Assistant Commissioner Nurul Amin.

The assailants, who had been riding a single motorcycle, escaped after the assault while shouting, "Allahu Akbar," or "Allah is great."

Fellow students and friends of Samad rallied Thursday at the state-run Jagannath University, where Samad was studying law and had attended class the evening of the attack.

"This is very sad for us. We are trying whatever we can do to support the family during such difficult time," university proctor Nur Mohammad said.

People also flooded Samad's Facebook page with messages to their late friend. "Friend, please pardon us. You were, you are, you will be (with us)," wrote one friend called Rahat Chowdhury.

Many of Samad's posts criticized radical Islam and promoted secularism. A supporter of Prime Minister Sheikh Hasina's secular Awami League party, Samad also took part in the movement that successfully pushed for prosecutors to have more scope for going after suspected war criminals.

Hasina's government has been cracking down on radical Islamist groups, which it blames for the deadly attacks last year on secular bloggers, minority Shiites, Christians and two foreigners. It accuses the opposition of supporting religious radicals in seeking to retaliate against the government for prosecuting suspected war crimes.

Some of the attacks were claimed by the Islamic State group, but the government dismisses those claims and says the Sunni extremist group has no presence in the country.

"We urge the Bangladeshi police and other authorities to do everything in their power to investigate and prosecute this vicious attack on free speech and thought, and halt this terrible pattern of murders," said Karin Deutsch Karlekar of PEN America, a group of 4,400 U.S. writers.

She also called on the U.S. and other countries to provide refuge to writers and secularists being targeted in Bangladesh. Samad's killing "is a cruel illustration of the costs of inaction," she said.

The Center for Inquiry also expressed concern. The center's public policy director, Michael De Dora, said the Bangladeshi government "must do much more to protect its own people from marauding Islamist killers."

"These murders keep happening because they are allowed to happen," Dora said.