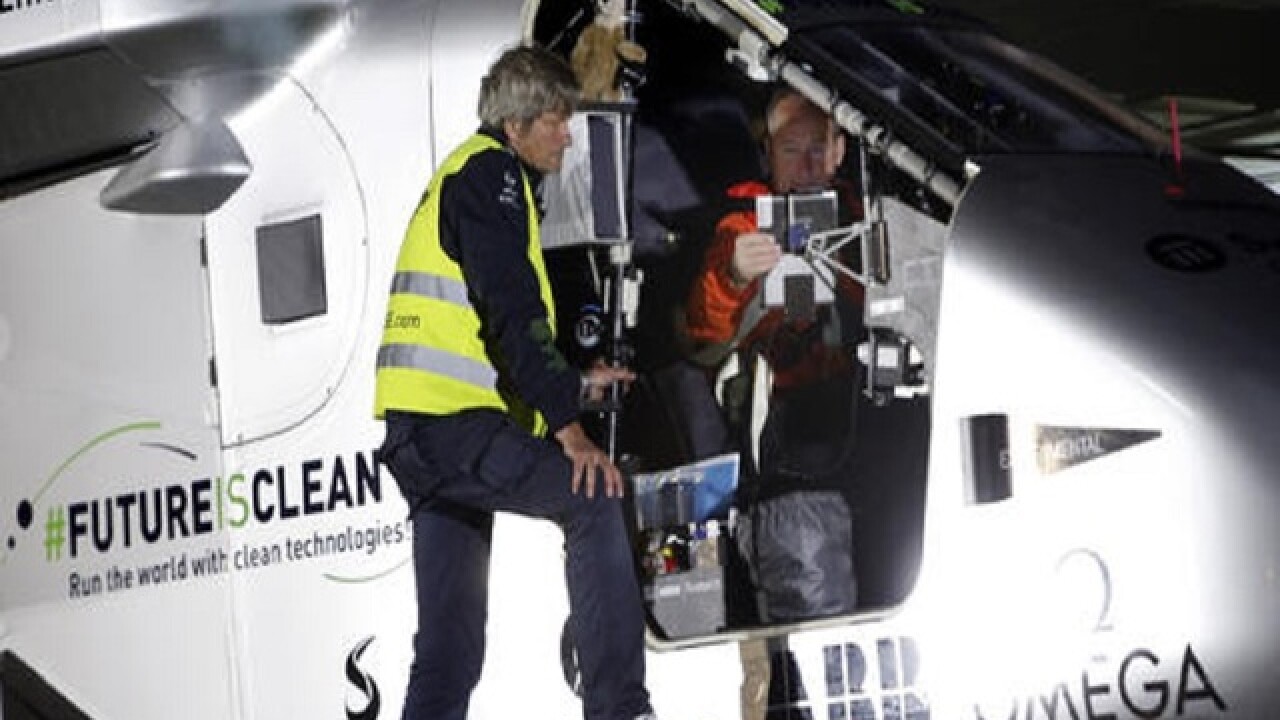 GOODYEAR, Ariz. (AP) — An airplane powered only by sunlight has arrived in a Phoenix suburb after completing the latest leg of its global trip.

SLOW GOING, BUT WHAT VIEWS

Flying without fossil fuel makes for a long trip.

The plane's solar power is captured by 17,000 cells mounted on its wings, which are larger than those of a 747 jetliner. Some of the solar energy is stored in batteries, allowing the plane to fly at night.

Ideal flight speed is about 28 mph, though that can double during the day when the sun's rays are strongest. The carbon-fiber aircraft weighs over 5,000 pounds, about as much as a midsize truck.

Maybe slow going isn't so bad when you're flying over some of the most scenic places in the U.S., including the Hawaiian islands and the Golden Gate Bridge in San Francisco.

After arriving in the Phoenix area Monday night, pilot Andre Borschberg called the trip from California "a beautiful flight."

For several minutes after arriving, Borschberg remained aboard as powerful winds buffeted the aircraft, forcing the ground crew to hold it down with straps.

"Sometimes it is more difficult to handle the airplane on the ground than in flight," he told reporters later.

Video from cameras aboard the plane as well as on the ground at the Goodyear airport showed the Solar Impulse as it flew through the night sky en route to its safe touch down.

Co-pilot Bertrand Piccard, also of Switzerland, flew the previous leg, a three-day flight to from Hawaii to California.

WHY A SOLAR PLANE?

Pilots have used layovers to engage with people along the way to explain the project, and project officials said Monday in a statement released to The Associated Press that they will decide in the next few days whether public view of the plane would be possible while it is in Arizona.

The overall project is estimated to cost more than $100 million and began in 2002.

The single-seat aircraft began its voyage in March 2015 from Abu Dhabi, the capital of the United Arab Emirates. It stopped in Oman, Myanmar, China and Japan en route to the United States.

The crew was forced to stay on the island of Oahu in Hawaii for nine months after the plane's battery system sustained heat damage on its flight from Japan.

After Phoenix, the plane will make two more stops in the United States before crossing the Atlantic Ocean to Europe or northern Africa, according to the website documenting the journey.

But project officials say it hasn't yet been decided exactly where the plane will go next in the United States.

"The team is examining a wide range of potential destinations in the mainland to leave a maximum flexibility for route planning," project officials said in a statement.

The team has flexibility in choosing destinations because it uses an inflatable mobile hangar and because of "the support and openness of the various airports."

It also isn't known yet known when the plane will take flight again.

On its previous layover, the plane landed late the night of April 23 in Mountain View, and departed a little over eight days later.