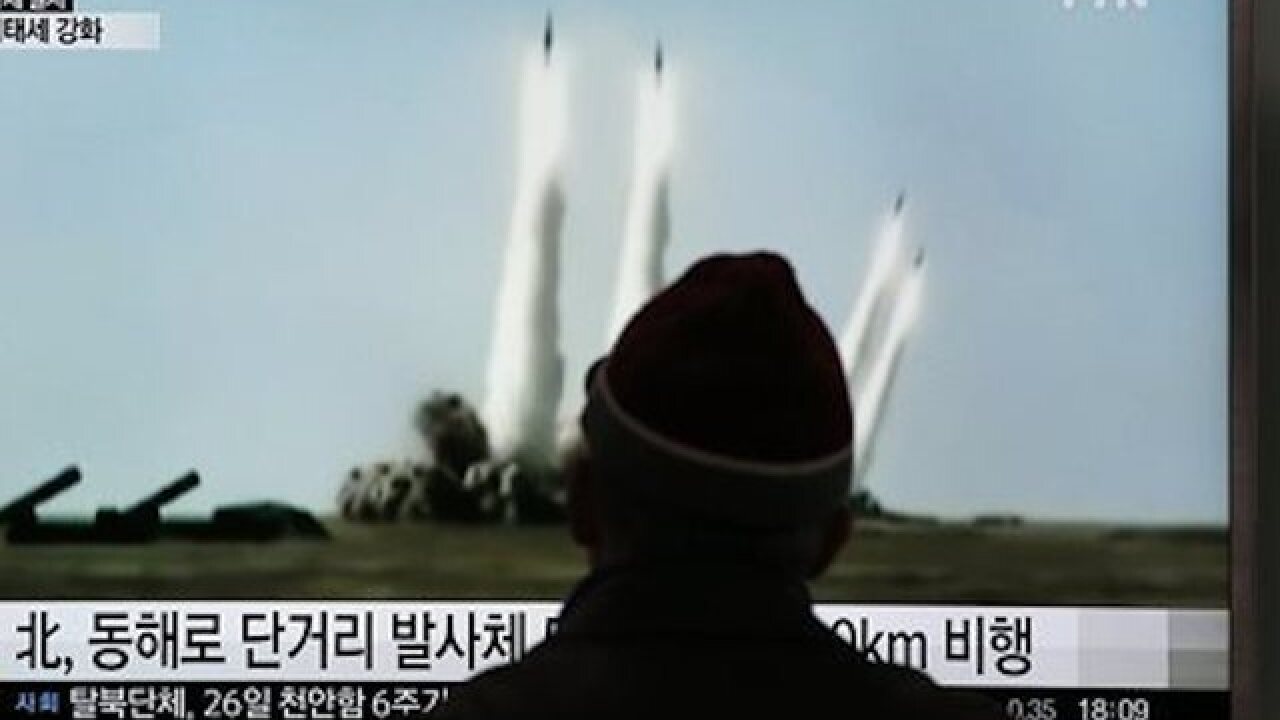 SEOUL, South Korea (AP) — North Korea fired five short-range projectiles into the sea on Monday, Seoul officials said, in a continuation of weapon launches it has carried out in an apparent response to ongoing South Korea-U.S. military drills it sees as a provocation.

The projectiles launched from a site near the northeastern city of Hamhung flew about 200 kilometers (125 miles) before landing in waters off North Korea's east coast, South Korea's Joint Chiefs of Staff said.

The South Korean military was attempting to determine whether the projectiles were missiles, artillery or rockets.

The firings appear to be North Korea's response to annual springtime U.S.-South Korean military exercises that it says are a rehearsal for an invasion. In the past two weeks North Korea has fired several short-range missiles and artillery shells into the sea and threatened pre-emptive nuclear strikes against Washington and Seoul.

This year's drills are the largest ever, and come after North Korea conducted a nuclear test and a long-range rocket launch earlier this year, leading the U.N. Security Council to impose its toughest sanctions on the country in two decades.

The U.S. special representative for North Korean policy, Sung Kim, who is visiting Seoul, said Monday that North Korea "should refrain from all provocative actions, including missile tests, which are clearly in violation of Security Council resolutions."

On Sunday, North Korean state TV broadcast photos showing leader Kim Jong Un supervising landing and defensive drills. The photos showed artillery blazing, navy ships landing as shells fell nearby, and soldiers running with the national flag. North Korea has a history of photo manipulation and there was no way to verify the authenticity of the photos.

Last week, state media said Kim ordered tests of a nuclear warhead and ballistic missiles capable of carrying such warheads. He issued the orders while overseeing what state media called a successful simulated test of a re-entry vehicle aimed at returning a nuclear warhead to the atmosphere from space so it could hit its intended target. The re-entry vehicle is considered one of the last major technologies North Korea must master to develop long-range missiles equipped with nuclear weapons capable of reaching the U.S. mainland.

Analysts in South Korea said the medium-range missile launch last Friday may have been a test of the re-entry technology. North Korean state media have not commented on the reported launch.