Senegal takes in 2 prisoners from Guantanamo 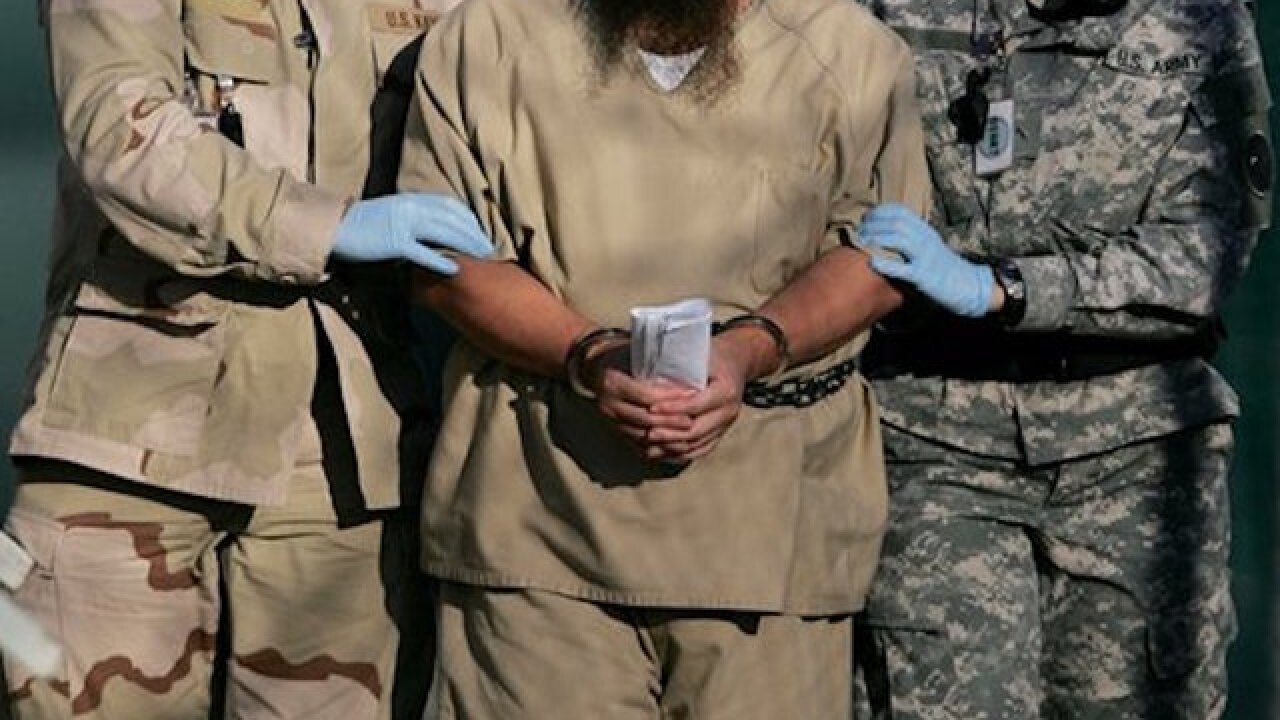 Copyright Associated Press
Brennan Linsley
<p>In this Dec. 6, 2006, file photo, reviewed by a U.S. Department of Defense official, a shackled detainee is transported away from his annual Administrative Review Board hearing with U.S. officials, in Camp Delta detention center at the Guantanamo Bay U.S. Naval Base in Cuba. In the last comprehensive review of prisoners held at Guantanamo Bay, the U.S. government decided nearly 50 were ìtoo dangerous to transfer but not feasible for prosecution,î leaving them in an open-ended legal limbo. Now in 2016, it seems many may not be so dangerous after all. (AP Photo/Brennan Llinsley, File)</p>

DAKAR, Senegal (AP) — Senegal has agreed to take in two Libyans who spent nearly 14 years in custody at the U.S. base in Cuba without charge, becoming the second country in West Africa to accept former detainees, officials said Monday.

Salem Abdu Salam Ghereby, 55, and Omar Khalif Mohammed Abu Baker Mahjour, who records show is about 44, were both members of the Libya Islamic Fighting Group, an organization that sought the ouster of Libyan leader Moammar Gadhafi and had been designated a terrorist organization by the U.S. since 2004.

Khalif's lawyer, Ramzi Kassem, said his client is looking forward to "receiving proper medical care" as he is missing his right leg below the knee after stepping on a land mine in Afghanistan in 1998. He is also blind in one eye, and has shrapnel in his leg and arm.

"This is a bittersweet moment. I'm unsure why a half-blind, one-legged man with only one fully-functioning arm, and whose only supposed crime was to object to the Gadhafi dictatorship in his native Libya, was not freed years ago," said Kassem, a professor at City University of New York School of Law.

Ghereby had been cleared for transfer from Guantanamo by U.S. authorities since 2010. His lawyer didn't immediately respond to a request for comment.

Their departure comes amid an effort by President Barack Obama to release Guantanamo prisoners who are no longer deemed a threat and to eventually close the detention center, a prospect that faces strong opposition in U.S. Congress. With the release of the two Libyans, there are 89 men left, including 35 cleared for release who are expected to be gone within months.

Neither of the two Libyans could be sent back to the homeland they fled in the 1990s because of the instability there unleashed by the violent overthrow of Gadhafi. U.S. Secretary of State John Kerry expressed thanks that Senegal agreed to take the men.

"The United States appreciates the generous assistance of the government of Senegal as the United States continues its efforts to close the Guantanamo Bay detention facility," Kerry said. "This significant humanitarian gesture is consistent with Senegal's leadership on the global stage."

Senegal's Foreign Affairs Ministry confirmed they would be receiving the former detainees in a statement released Monday on the country's independence day. It cited the "Senegalese tradition of hospitality" and Islamic solidarity.

Khalif, who had been cleared by a U.S. government review board last year, was described in a profile issued by the Pentagon as having worked for a company owned by Osama bin Laden in Sudan after he fled Libya in the 1990s.

He later moved to Afghanistan, where he allegedly fought against the Northern Alliance in its war with the Taliban. Kassem, his lawyer, said that a U.S. federal court judge found there was no evidence that he was ever involved in any attacks on the U.S. or its allies. Both men relocating to Senegal were captured in Pakistan.

More than two dozen countries have now taken nearly 100 former Guantanamo prisoners since 2009. These are the first to go to Senegal, though the West African nation of Ghana also has accepted two former detainees.

Their arrival comes amid growing concern about Islamic extremism in Senegal.

Officials in the moderate, predominantly Muslim country on West Africa's coastline have grown increasingly concerned about the threat of jihadis in recent months. Al-Qaida's North Africa branch has carried out a series of deadly attacks on places popular with foreigners, including hotels, a restaurant and a beach in the region.

Senegal is now widely considered a possible next target after the attacks in Mali, Burkina Faso and Ivory Coast. As a result, security has been significantly enhanced at upscale international hotels, along with French-owned grocery stores and restaurants in the normally peaceful capital. Armed police officers in flak jackets search the contents of all vehicles entering the parking lot of Dakar's sole upscale shopping center.